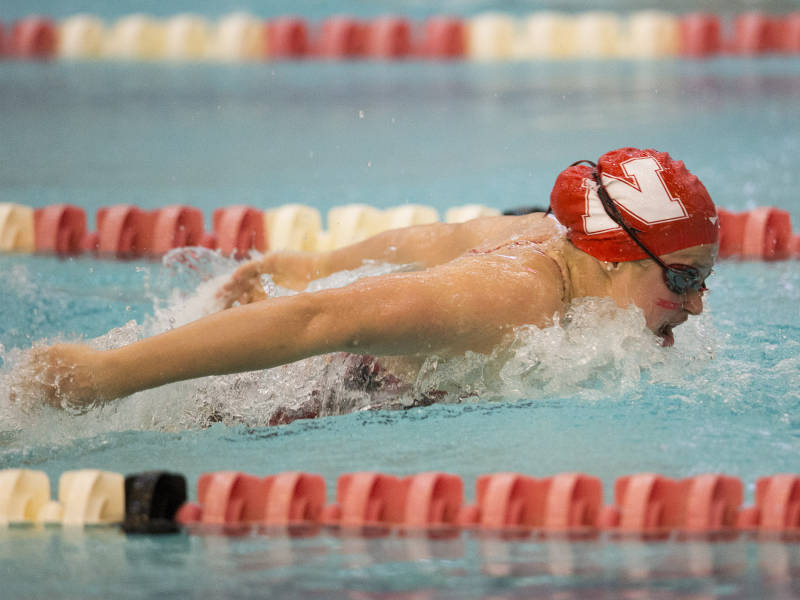 Despite winning both relays, Iowa State only claimed victory in 3 of 14 individual events. Each of those 3 individual wins came from different swimmers. Stock photo via Courtesy Isabel Thalken/Nebraska Communications

Nebraska ran away with a victory against Iowa State on Friday, October 26th. Despite winning both relays, Iowa State only claimed victory in 3 of 14 individual events. Each of those 3 individual wins came from different swimmers. Sophomore Martha Haas took the 100 breast in a tight victory, out-touching Nebraska’s Tori Beeler, 1:04.52 to 1:04.79. Iowa State junior Anna Anderson won the 100 free decisively, posting a 51.64 to win by 1.5 seconds. the Cyclones’ only other individual event win came from freshman Elynn Tan, who swam a 23.70 to get her hand on the wall first in the 50 free. Tan was the only swimmer in the field to break 24 seconds.

Lincoln, Neb.- The Nebraska swim and dive team hit the road to continue their dual season. The Huskers defeated the Cyclones 184-115, to improve to 3-0 on the season.

Senior Kaylyn Flatt captured a first-place finish in the 200-yard freestyle with a time of (1:53.11)

In the final swim event, the Big Red ended strong with Haebig, Helferich, Allie Worrall and Allison Kopas in the lane for a neck-to-neck second-place finish in the 400-yard freestyle relay (3:31.38).

The Big Red advances to 3-0 on the season. The Huskers will return home to take on Kansas Saturday, Nov. 3 at 2 p.m.

AMES, Iowa – The Iowa State Cyclones (2-1) were edged out 115-184 by Nebraska (3-0) on Friday night. The Cyclones won both relays, and Dana Liva post Zone-qualifying scores on both boards, but the effort fell just short.

Iowa State started the meet well, the quartet of Emily Haan, Martha Haas, Elynn Tan and Anna Andersenwon the 200 medley relay with a 1:44.32. The squad won by over a second, securing a Cyclone victory. Andersen and Emma Ruehle took second and third in the 200 free.

“I was just trying to have fun and make it like a practice,” Liva said following the meet. “We did meet prep this week, so making those dives helped me make the dives count tonight.”

“It was good to see her qualify on both boards,” diving coach Jeff Warrick said. “It was definitely an improvement from last week, and I think she rose up to the competition.”

Rizzo was touched out by Nebraska, her time of 2:08.66 just .04 off the leader. The Cyclones won the 400 free relay with the group of Tan, Andersen, Hundley and Haan. Their time of 3:30.76 was well under the Cyclones’ season-best mark set last weekend.

“I’m very happy with the way our women raced tonight,” head coach Duane Sorenson said. “The nice thing is as well as we swam, we can do a lot of things to be even better. Our distance group has had a lot of little injuries that they are dealing with, so we knew going in a little weak, but Lucia Rizzo did a nice job swimming the 500.”

The Cyclones travel to Dallas next weekend for a Friday night meet against Big 12 opponent TCU and the host SMU. The meet is set for 6 p.m. Follow the team on Twitter (@CycloneSD) or on Facebook at facebook.com/cyclonesd for in-game updates, post-meet recaps and results throughout the season.