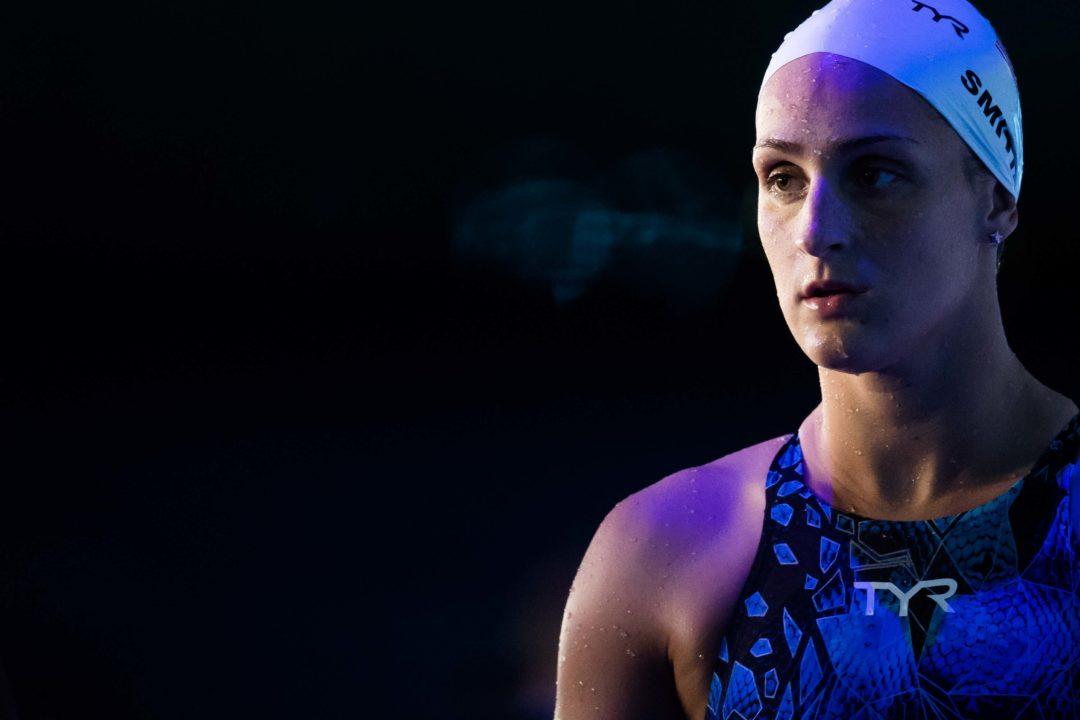 Team Energy Standard topped the podium overall at the inaugural Energy For Swim! event in Rome, despite a 4:04 400 free from American Leah Smith. Archive photo via Mike Lewis/Ola Vista Photography

Day 2 of the uniquely-formatted ENERGY FOR SWIM! competition concluded in Rome, Italy today, with Team Energy Standard topping the 4-team meet with 453 overall points. In addition to racing for personal performances, swimmers comprising Team USA, Team Australia, Team Italy and Team Energy Standard earned points based on their placing among competitors in each swimming event. Each team’s pre-designated charity organization will ultimately receive financial support according to the final team ranking after the meet has ended, while a portion of ticket sales is also being devoted to the charity foundations selected by the nations’ teams.

The charity organizations benefitting from the event include Save the Children, Tabletochki, Cure Brain Cancer and Make A Splash.

When all was said and done tonight in Rome, Team Energy Standard took the overall meet title with a grand total of 453 points. Team USA was next with 401.

In addition to a Celebrity Relay featuring Italian personalities, the elite athlete mixed 4x100m freestyle relay took to the pool tonight in Rome. Team Energy Standard brought their overall relay record to 4 and 1 with their gold medal-garnering performance tonight. The squad of Sergii Shevtsov, Ivan Girev, Michelle Coleman and Sarah Sjostrom combined for a winning time of 3:26.06 to further distance their team in the point total.

Splits for the winning relay included 49.96 for Shevtsov, 49.19 for Girev, 53.48 for Coleman and 53.43 for Sjostrom. Winning silver in the race was Team Australia, whose relay squad included comeback kid Kyle Chalmers in the 2nd leg. In his first international competition since undergoing a heart procedure to address his SVT heart condition the 19-year-old clocked a split of 49.82, as the Aussies earned an overall time of 3:27.23.

Swedish speedster Sarah Sjostrom didn’t partake in the women’s 100m freestyle race tonight, but she still collected 3 wins after all was done and dusted at the Foro Italico Pool. She snagged the 100m butterfly title tonight in 57.56, while also clocking a winning time of 25.79 to take the women’s 50m butterfly event. In the latter race, Sjostrom finished less than a tenth ahead of Egypt’s Farida Osman, who touched in 25.87 for silver.

Sjostrom’s 3rd victory came in the women’s 50m freestyle skins event. Although Aussie Cate Campbell took the preliminary round in a speedy 24.84 to Sjostrom’s 25.12, the Swede fought back to take round 2 and 3 in respective marks of 24.93 and 25.39 to take the overall skins title.  Tonight’s medals are added to Sjostrom’s victories in the 200m freestyle and 50m freestyle from last night to give her 5 wins overall.

Team Australia’s Emily Seebohm also made her presence known tonight in Rome, taking the women’s 100m backstroke handily in 59.02. The only sub-minute swimmer of the field, Seebhom won over silver medalist Olivia Smoliga of Team USA by over a second, with Smoliga touching in 1:00.26.

Both of the women’s breaststroke events came down to the wire, with Ruta Meilutyte of Lithuania and Team Energy Standard scorching a time of 30.59 for the win in the splash and dash. She touched less than a tenth ahead of yesterday’s 100m distance winner, Jennie Johansson of Sweden and Team Energy Standard, who finished in 30.67 for silver.

The 200m breaststroke event, however, went to Team USA with swimmer Bethany Galat winning the race. The top 3 finishers were all less than half a second apart, with Galat leading the pack with a time of 2:25.27. Team Energy Standard’s Marie-Sophie Harvey was just .10 behind in 2:25.37, while Meilutyte rushed in for bronze in 2:25.62.

Hannah Miley, who had a lackluster World Championships, got her hand on the wall first in the 400m IM with a mark of 4:38.10, about .2 faster than she was in Budapest.

Femke Heemskerk was the women’s 100m freestyle winner, splitting 25.86/27.59 for a final time of 53.45 for the win. The next closest competitor was former world record holder Cate Campbell of Team Australia who notched a silver time in 53.56.

Finally, Team USA’s Leah Smith easily won the women’s 400m freestyle by about 5 seconds, clocking a time of 4:04.58. That mark falls within her own personal top 10 times of her career and would have placed 5th at the 2017 FINA World Championships in Budapest.

Yesterday’s stud Chase Kalisz of Team USA proved he is still on top in the IM world, with a super swift performance in the 400m distance tonight. Winning by almost 9 solid seconds, Kalisz clocked a monster time of 4:09.67 to take gold for Team USA. While off his remarkable swim of 4:05.90, which gave him the gold in a new championship record time in Budapest, Kalisz’s sub-4:10 tonight under no pressure would have still finished 5th overall in that stacked Worlds final.

Team USA also saw points routed its way courtesy of Nathan Adrian, who topped the men’s 50m freestyle skins. Clocking times of 22.42, then 22.84 and finally 23.15, Adrian was able to hold off Italy’s own Luca Dotto whose final time landed at 24.28 for silver in the skins.

Le Clos was also the men’s 100m butterfly winner, taking the event in 51.45 over Italy’s Piero Codia‘s 51.56. Team USA’s Tim Phillips fell just .04 short of silver with a mark of 51.60, while his teammate Ryan Lochte finished in 6th in his first overseas meet back after suspension with a time of 53.31.

Sprinters Cameron van der Burgh and Ben Proud, both of Team Energy Standard, took their respective 50m breaststroke nad 50m butterfly events in Rome tonight. VDB touched in 26.88 to represent the only swimmer under the 27-second threshold in the 50m breaststroke while Proud took the fly race in 23.33.

We reported how Russia’s Kliment Kolesnikov scored a new World Junior Record in the men’s 100m backstroke tonight, taking the event in 53.35. That topped American and world record holder Ryan Murphy who touched just .02 behind in 53.37, while Australia’s Mitch Larkin rounded out the top 3 in 53.82.

I find it so funny that in his 400 IM, Kalisz’s second 50 of breaststroke was faster than his first 50 of freestyle

4:09 is a ridiculous swim by Kalisz at a meet like this.

It’s nice to see an American hungry to the be the best ever in the 400 IM again. It’s been a long time since Phelps and then Lochte. He seems to be really coming into his own.

What are the skin races that are shown in the results?

How were USA athletes selected for the meet?

I was wondering the same thing?? Swimswam, can you please answer this??

The meet organizers reached out to their desired swimmers through USA Swimming, and it was then handed off to the agents to negotiate the details. If someone declined they would move on to someone else.

Tell me the collegiate students don’t have agents.

No, it’s their coaches.

so no current college athlete could compete in this event?

No I saw a few college kids, Bethany galat and Ella Eastin at least. I think a few more

What is different about the skins events?

Unlike the ones during Mare Nostrum where they had significant breaks (aka morning session and evening session), in the skins they literally finished the race and then proceeded to swim the event again until there was a winner.

I can only imagine Sarah and Cate in particular would have been tired as hell by the time they got to that final 50m free!

Yea In Monaco it was rest in between but at Bergen Swim Festival they used this format so Sjostrom has raced this format before. Using that experience and going slower in the QF here seems to have paid off.