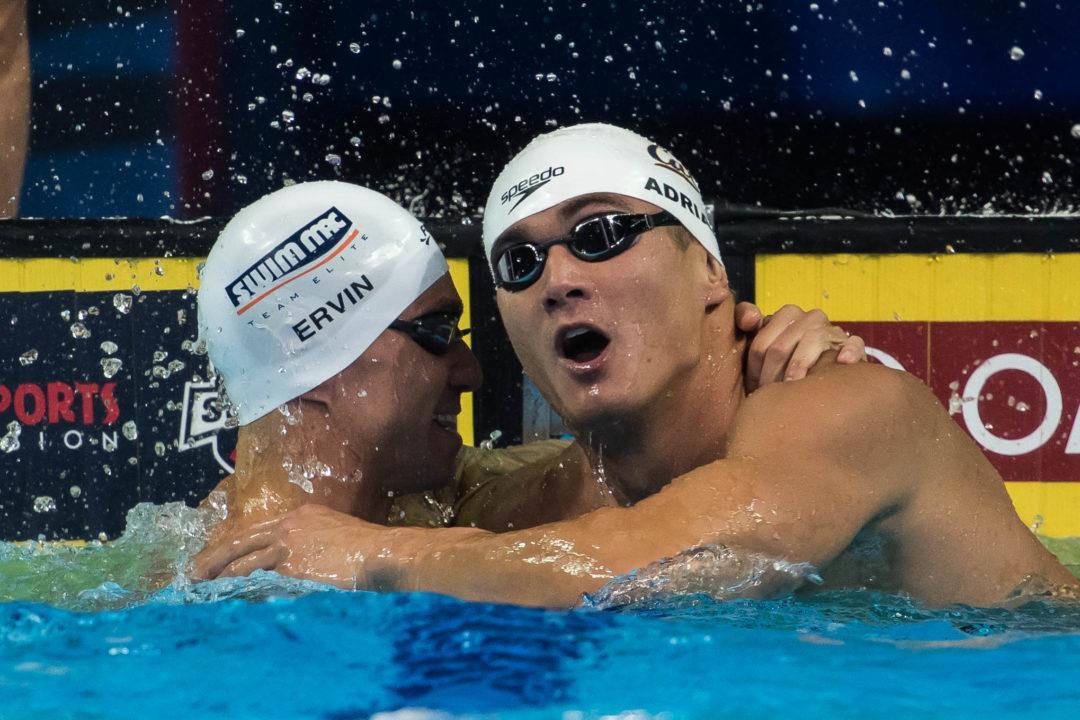 The men’s 4×100 free relay prelims took place this morning, with Russia, USA, Australia and France qualifying 1st through 4th, easily through to the final. Within each lineup was the race within the race, as members of each prelim relay hoped to put up a split fast enough to be considered for the final with all four leaving at least one swimmer in reserve.

The team that will see the biggest change over are the 2nd seeded Americans, who are expected to use Nathan Adrian, Caeleb Dressel and Michael Phelps in the relay tonight, along with the top split of the morning relay. That went to Anthony Ervin, who put up a 47.65 anchor to give the US the win in heat 2. Ryan Held also put up a strong split of 47.79, but look for Ervin to swim the final with the aforementioned three.

For the top seeded Russians it’s fairly simple, they’ll bring in Vladimir Morozov who will replace the slowest leg of the morning relay. Danila Izotov and Alexander Sukhorukov both split 47.6 this morning so they’re safe. It comes down to Andrey Grechin and Aleksandr Popkov. Grechin will likely get the nod as he qualified in the individual 100 free, though his lead-off this morning was off his best this year in 48.58. Popkov split a solid 48.18, but will likely be out. With Izotov and Sukhorukov looking so strong this morning, the Russians are a definite threat for gold.

It’s the same situation with the 3rd seeded Australians, who will bring in world #1 Cameron McEvoy, likely in exchange for Matthew Abood who split 48.43 this morning. James Magnussen‘s 48.85 lead-off was nothing to write home about, but it was faster than Abood if reaction times are taken into consideration. Kyle Chalmers had the fastest split of the morning in 47.04, so if him and McEvoy are on their game they’ll be hard to beat.

The French will make two lineup changes, moving in Florent Manaudou and Jérémy Stravius, who scratched the 200 free semis tonight to focus on this relay. With those two coming in out goes Clemént Mignon who led-off in 48.59 this morning, and William Meynard, former World bronze medallist in the 100 free who split 49.05. With the additions of Manaudou and Stravius, both of whom have proven their ability to perform in big moments, coupled with two sub-48 second splits this morning from Fabien Gilot and Mehdy Metella, the French will be tough to crack.

The other team heading to the final that will almost definitely make a change is Brazil, who qualified in a tie for 5th with Canada. Anchor Matheus Santana had a disappointing 49.00 split, so they’ll likely look elsewhere for their fourth member tonight. Joao De Lucca, who missed the 200 free semis this morning finishing 25th, will likely be added based off his time of 48.59 from the Maria Lenk Trophy. Gabriel Santos split 48.63 this morning, so he could potentially be exchanged for 50 free specialist Bruno Fratus, though his season best time is only 49.70. He has split 48.0 on relays at Championship meets in both 2014 and 2015, so he is a proven performer and might be worth the gamble for the Brazilians.

The Belgians, who qualified 7th overall, could make a change as well, as lead-off Dieter Dekoninck swam an underwhelming 49.91 this morning. A possible replacement is Emmanuel Vanluchene, slated to swim the 200 IM later, but owns a personal best of 49.09 done this year.

Both the Canadians (t-5th) and Japanese (8th) won’t make any changes, using their best four swimmers this morning.

One team that gambled this morning were the Italians, who sat out relay ace Filippo Magnini and ultimately paid the price finishing 9th, five one-hundredths behind Japan.

Check back on SwimSwam about an hour before finals for the official relay lineups once they are released.

How dare you cheer for a non US nation? You should be ashamed of yourself!

In terms of Ervin and Held. While Ervin barely out split held , Ervin had clean water to swim through during his anchor leg compared to Ryan due to their lead at that moment in the race. Just something that think about

You can always count on the NC State crew to show up with irrational comments.

Ervin has a lot more international experience, and he went faster this morning. You have to go with him here.

Michael Phelps is Michael Phelps, so maybe him on the relay goes without saying. However, he hasn’t been under 49 in competition in the last two years. Ervin and Held just went under 47.8. I guess the expectation is that Phelps will just perform?

He also hasnt swam a tapered 100 free in 2 years. Did a 48.3 in a time trial a week ago. Phelps will be fast. Dont get it with all these doubters how many time does he need to come through??