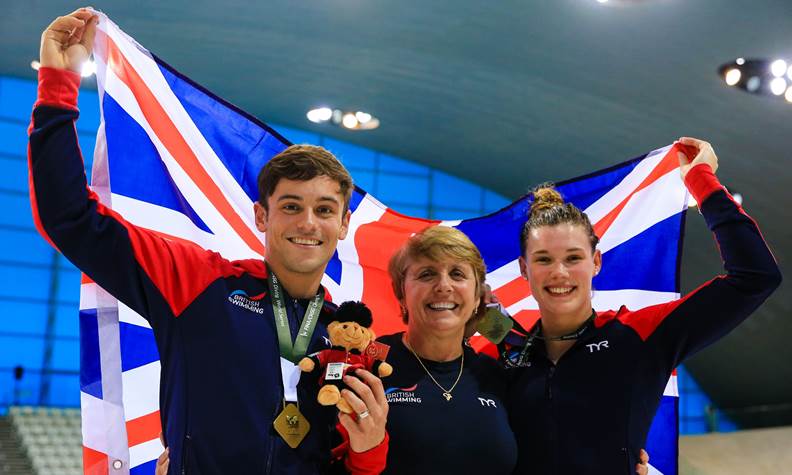 O’Meara put together an impressive performance at the Wolfpack Invitational, winning the 1-meter and 3-meter diving events.

Tereshchenko racked up third-place finishes over the weekend in the 3-meter, platform (261.65) and 1-meter at the Trojan Diving Invitational hosted by USC.

Westchester’s Shannon O’Hara won both the women’s 1-meter and 3-meter events at the meet, putting up respective scores of 234.85 and 241.00.

Norwegian royalty honored Tuxen for being the first female diver to represent Norway since 1988.

With Daley having clinched the overall World Series crown earlier in the night courtesy of bronze in the 10m individual and Reid having set a British record in the Women’s 3m Springboard, hearing the British national anthem ring around the London Aquatics Centre was a fitting end to a great weekend of diving.

In the final event of a stunning weekend of diving Daley and Reid combined, the duo looking to win yet another World Series medal in that Mixed 3m Synchro event. Despite both being tired from their individual events, they got off to a flying start with two strong required dives and an impressive Inward 2 ½ Somersault Pike (405B) to lead the competition after three of the five rounds.

After silver in Montreal and three bronze medals in the 2019 World Series so far, the pair were hoping to end the series with gold in their home pool and heading into the final round they were just one point behind the Chinese pairing of Chen and Tai.

Producing one of their best dives of the year, Daley and Reid delivered a stunning Front 3 ½ Somersault Pike (107B), good for 77.19 points, to strike gold with a grand total of 322.89.

Earlier in the evening from the 10m platform, Daley and his synchro partner Matty Lee both contested the individual final, much to the excitement of the home crowd.

At the halfway point Lee led the way from a British perspective as he ranked third, but after dropping his third round dive, Daley had work to do as he was down in sixth position. Lee continued his fine form this weekend with an impressive Back 3 ½ Somersault Pike (207B) to score 86.40 and remain in the hunt, whilst World champion Daley started to claw his way back up the leader board with an 89.25 score.

After round five neither Lee or Daley were in a medal winning position, but with the scores so close it was anyone’s guess as to who would take home the medals. Channeling all of his experience, Daley fought back, an impressive Back 3 ½ Somersault (207B) securing 95.40 to snatch a brilliant bronze.

Of his performance Daley said:

“I’m really happy with being the overall World Series champion – I’m always happy with a medal. I wish it was a different colour but I missed my third round dive and I can’t expect to miss a dive that badly and still win. I knew I was still in the hunt for a medal even though I was in last place after that round – I knew that If I stayed in my own zone I would be able to come back.”

Unfortunately for Lee his final dive didn’t match the quality of his previous five, so he ended the competition in sixth place with a total of 474.80. Afterwards, he reflected:

“I have definitely made some progress and am really happy about making two finals. In that final my last dive wasn’t so great, but all five of my dives before that were really good – I was high up there. I was fighting for medals and that gives me confidence going into Nationals and the World Champs, and then on to next year and the Olympics.”

In the Women’s 3m Springboard final Grace Reid got off to a strong start with scores of 67.50 for both of her opening dives, putting her joint third at the end of the second round. Seemingly thriving on the support of a large home crowd, Reid was remarkably awarded the same score again for her third dive, setting up an exciting finale as the Scot chased a first ever individual World Series medal.

Getting better as the night went on, the European champion in this event delivered a beautiful Front 3 ½ Somersault Pike (107B) that was rewarded with 69.75 points, leaving her in the bronze medal position with just one dive remaining.

Nailing her final dive, a Forward 2 ½ Somersault 1 Twist Pike (5152B) that scored 72.00 points, Reid just missed out on a medal in fourth place but was rewarded with a new British record.

Commenting on her performance, Reid said:

“It’s unbelievable. I went into this afternoon knowing that it was going to be a really tough field.  As I did this morning I went dive by dive and to walk away with a PB is just massive.

“I think the first couple of months of the year I was struggling to trust the process, a bit concerned maybe I wasn’t doing it right, and now things are starting to fall into place I’m excited to work even harder and see where I am.”

Gold went to Australia’s Maddison Keeney, with Jennifer Abel producing by far the dive of the competition to snatch silver in the last round, whilst Malaysia took bronze in the form of Nur Dhabitah Binti Sabri.