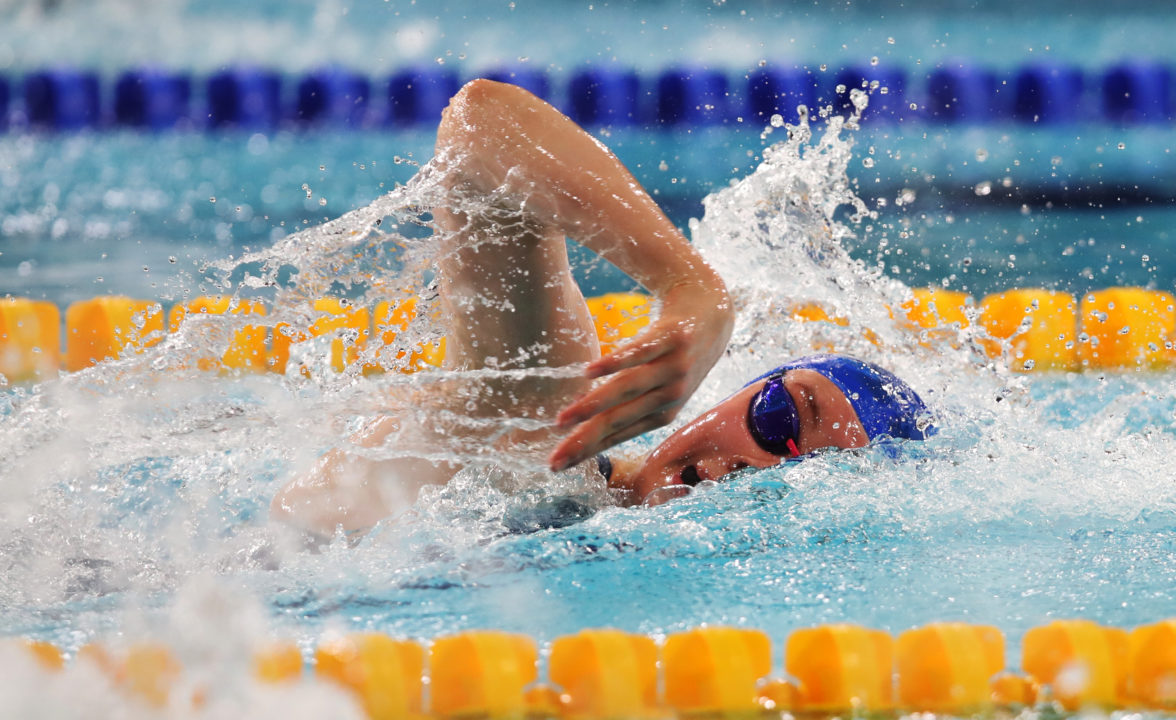 While all eyes are on Gwangju, Korea for the 2019 FINA World Aquatic Championships, another competition is now underway in Baku, Azerbaijan. The summer edition of the biannual European Youth Olympic Festival officially saw its swimming competition begin today.

The swimming action is taking place at the Baku Aquatics Center, site of the inaugural 2015 European Games. Approximately 3600 young athletes from 50 European countries will take part in this year’s festival, the biggest multi-sport event for the youth of Europe.

Night 1 in Baku saw just 1 men’s and 1 women’s final take place, with the remainder of the races represented by semi-finals.

For the men, the 400m free was on the menu, with Croatia’s Franko Grgic taking the top prize in a time of 3:52.10. That held off runner-up Silas Beth of Germany and Alexandros Kachris of Greece, who landed on the podium with the silver and bonrze3 in marks of 3:52.63 and 3:53.53, respectively.

Grgic took control of the race from the beginning and never let go, although Beth was never more than half a second behind. The Croatian’s personal best heading into this Festival was the 3:53.24 he established this past March, so the 16-year-old managed to slice off almost a second in that amount of time.

Swimming at the 2019 Croatian Team Championships in March Grgic swam a 14:56.55 in the 1500m free. That time broke the old Croatian Record of 15:04.45 and made Franko the country’s first-ever swimmer under 15 minutes in the event, so this 400m gold may just be the start of a barrage here in Baku.

British standout Katie Shanahan did her thing in the women’s 400m IM final, producing a winning time of 4:43.92. That established a new EYOF Meet Record, beating the field by over 6 seconds in the process.

15-year-old Shanahan has been on a tear this year, setting a British Age Record for 14-year-olds in the 200m IM at the British Championships in April. Her time of 2:15.29 came in addition to Shanahan overtaking Hannah Miley’s Scottish 400m IM Age Record with her time of 4:46.62.

At the European Junior Championships in Kazan, Shanahan took 4th in the 200m IM in 2:14.55 to lower the aforementioned record, but she also nailed a lifetime best of 4:43.36 in the 400m IM. As such, her time tonight was within striking distance of her newly-minted career fastest, giving a glimpse into the trajectory this City of Glasgow swimmer is on this summer.

With just 2 finals having taken place, the medal count through day 1 of competition in Baku appears below:

Haven’t seen any outstanding on day 1. I also have to say that i am not a fan of GB and Italy sending their talents to the junior european championships and EYOF back to back, seems like a surefire way to burn those talents.

Where do you want to send the talents?

The chance to wear the GBR cap internationally? I’m thinking these budding swimmers are right where they want to be.

Grgic is definitely one to watch for the next years. Maybe even a candidate for next year’s Olympics? At least for the final. Beth also good.

I mean with his time this year he already could have had a chance to make the final at worlds. You’d expect him to drop more time next year and then he definitely would be a favorite to make the final, although i don’t see him becoming a medal contender, he would probably have to drop 20 seconds for that. Beth improved his 400 free PB by 5 seconds here and by 7 seconds compared to last year, this is also a new german age group record by 3 seconds. If this improvement translates to the 800 free, he should be able to swim around 8:01. I just wish Germany would have that much talent in other events as well.… Read more »