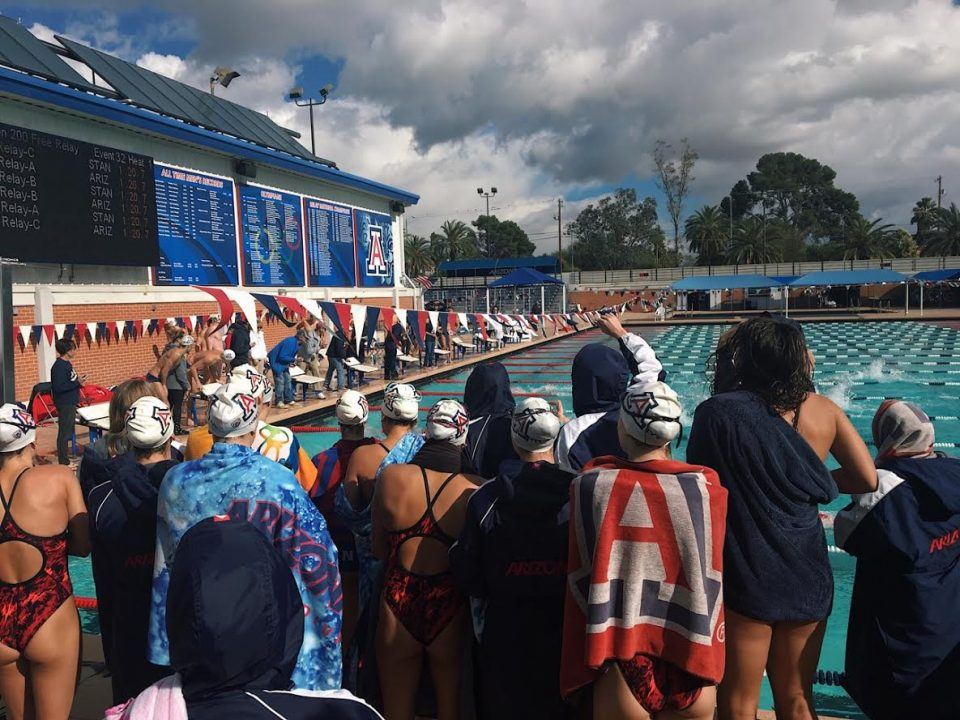 Hannah Cox was the leading performer, winning an individual triple. She kicked things off in the 1000 free, winning by nearly 20 seconds as she touched the wall in 9:58.52. Archive photo via Taylor Schick

The Arizona Wildcats opened their season with a Pac-12 victory on the road on Saturday. They traveled to Washington State for a dual meet, giving Augie Busch his first win as Arizona’s head coach. The Wildcats tallied 161 points to Washington State’s 101.

Hannah Cox was the leading performer, winning an individual triple. She kicked things off in the 1000 free, winning by nearly 20 seconds as she touched the wall in 9:58.52. She then completed the distance free sweep in the 500 free (4:52.53), where she was the only swimmer to break 5 minutes. Cox closed the session with a 3-second victory in the 400 IM, leading from start to finish in 4:23.06.

Senior Cameron McHugh also picked up multiple wins for the wildcats. In the 200 free, McHugh made a late charge to swim past teammate Kirsten Jacobsen, winning 1:51.13 to 1:52.05. She then had a dominant performance in the 200 back, winning by over 3 seconds. She was the only woman to break 2:00, touching the wall in 1:57.68.

Hannah Bruggman, who has established herself as one of the major players for WSU early on this season, also had a highlight swim for the Cougars. Bruggman took on ace sprinter Konopka in the 50 free, winning with a 23.48 to Konopka’s 23.57. She picked up a 2nd place finish in the 100 free, touching in 51.93 behind Arizona’s Jamie Stone (51.58).

PULLMAN, Wash. – Arizona women’s swimming and diving opened the 2017-18 season with a convincing victory on the road at Washington State. The Wildcats defeated the Cougars 161-101 in the season-opening dual meet.

Konopka, Kayla Filipek, Paige Kremer, and Stone, won the 400 free relay with a time of 3:25.88. Team B placed second for the Cats with 3:26.06 (Zohar Shikler, Morgan Ginnis, Ashley Sutherland, and McHugh).

Freshman Stone had an impressive first meet, taking first in the 100 free with 51.58 and helping the 400 free relay team to victory.

Men’s team unofficially starts season: While the women were in Pullman, the men unofficially kicked off their season with an intrasquad meet. Team Blue, coached by Clif Robbins, defeated Team Red, coached by Jesse Stipek.

Up Next: Select men and women will swim in the USA Swimming College Challenge on Oct. 21-22 in southern California. The Wildcats will have their home-opener on Saturday, October 28 at 11a.m. against the Utah Utes.

Pullman, Wash. – Washington State swimming recorded five wins, but dropped a highly competitive Pac-12 opener to No. 24 Arizona, 161-101 at Gibb Pool Saturday. Hannah Bruggman and Emily Cook had outstanding performances for the Cougars, each claimed two races both were members of the winning 200 Medley Relay team.

Bruggman swam anchor for the first place 200 Medley Relay team. Alongside teammates Cook, Linnea Lindberg, and Anna Brolin, the Cougars swam to an impressive 1:43.12 in the meet’s opening race. She took first in the 50 free with a season best time of 23.48. Bruggman clocked in at 51.93 in the 100 free for second place, missing out on first by less than a half of a second. She was also a member of the third place 400 Free Relay team. Alba Fores, Bruggman, Rachel Thompson, and Ciera Kelly clocked in 3:27.68.

Freshman Emily Cook performed well, garnering 12.5 points for her team. In addition to a first place finish in the 200 Medley Relay, Cook took first in the 100 back with a time of 54.89, good for an NCAA “B” standard time and sixth fastest in WSU program history. Cook also tied with fellow freshmen teammate Taylor McCoy in the 200 back, both clocking in at 2:01.15 for second place. McCoy, a Pullman, Wash. native, had a third place finish in the 100 back, posting a season best 57.58.

The Cougars are back in Gibb Pool next Saturday, Oct. 21 for the alumni meet scheduled to begin at 10 a.m.