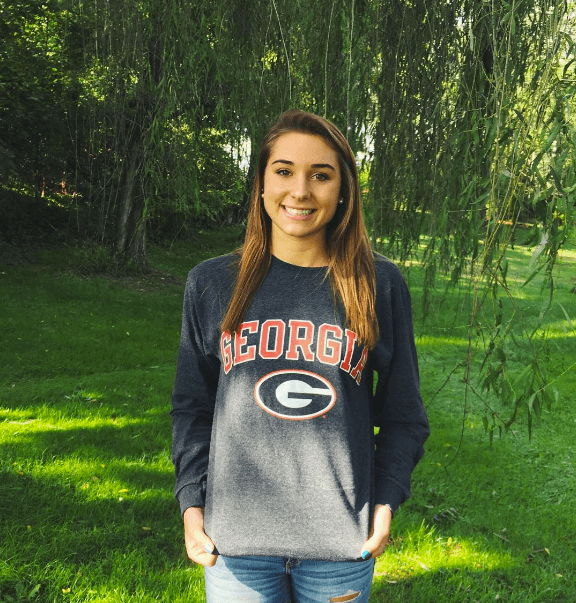 Courtney Harnish of York YMCA, our #1 recruit in this year’s class, has verbally committed to swim at the University of Georgia, per her Instagram post earlier today.

Her best times are listed below:

As a distance freestyler, Harnish has room to slide right into the open slot left by three-time NCAA champion MacLean, who graduated last May.

With Olympic medalists and NCAA champions Smoliga and Chantal van Landeghem in their final season, Harnish’s commitment heralds in the new era of Bulldog swimming. She joins Donna Blaum, Sammie Burchill, Regan Barney, Emmaline Peterson, and Maddie Wallis in a Georgia recruiting class that is already off to very strong start.

I’m not saying she won’t be faster. I’m saying the statement that that time would have put her in eighth at the NCAA meet is factually incorrect. I’m sure she will drop plenty of time at Georgia.

Georgia did very well last year; however, if Manuel didn’t redshirt last year, Stanford would have been able to snag the NCAA Championship from Georgia.

This year should be exciting race between 3 top schools. I would say that Stanford, Cal and Georgia would finish 1, 2, and 3, respectively, this year.

Manuel, AW, and Ledecky all deferred or redshirted. Crazy.

A&M this year should do better than UGA. Look at the points UGA looses vs the points A&M looses.
Will be fun to watch, that’s for sure.

The Dawgs are really not playing around. This year may be a tough hit but the dawgs will pull through and surprise yall like they always have.

Seems like a down year. I feel like in past years the #1 recruit was a near-lock for Top 3 in multiple events at NCAAs on the women’s side.

You’re forgetting that because this was an Olympic year, some of these tops girls were training heavily for long course instead of short course. This could be a cause for why their times are not as fast as previous years, because most of their times are from spring of 2015.

After trials I think we all had the feeling that the DAWGS would be back in the recruiting game. #CommitToTheG

As well as winning 3 of the last 4 NCAA titles.

Stanford is all but a lock this year though

I totally agree with Cal second place but if you look at articles from a year ago, NO ONE thought UGA would win…..that is why they have the meets.

Is that really a divisive opinion? Look at the rosters y’all