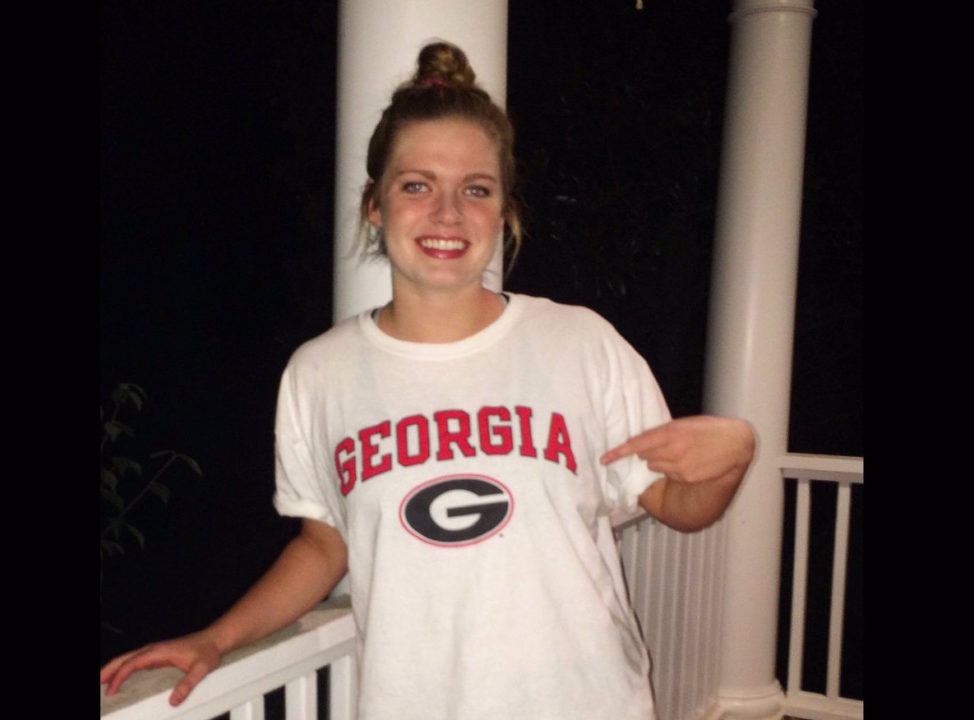 The State of Georgia's top freestyle sprinter in the Class of 2021 has verbally committed to swim for the defending NCAA Champion Georgia Bulldogs. Current photo via Twitter/@BlaumDonna

SO excited to announce that I committed to swim at UGA next year! Go dawgs!!❤️ pic.twitter.com/4yVCUHzexo

Donna Blaum is a sprint specialist and three-time individual 1-5A Georgia High School Swimming champion. She is from Fayetteville, Georgia, and competes for Starr’s Mill High School and Southern Crescent Aquatic Team. At the 2015 Georgia High School Swimming Championships, she won the 50 Free (23.36) and 100 Fly (54.66). At that same meet in February of this year, as a junior, Blaum defended her title in the 50 Free by swimming 23.44 in the finals.

All of Blaum’s times listed above are from 2014, so if she can improve this season, she could be an immediate contributor for the Bulldogs as a freshman.

Georgia is off to a much stronger recruiting start this year compared to last year—Blaum is the first in-state commitment but the fifth verbal overall to the women’s program. She joins Sammie Burchill, Regan Barney, Emmaline Peterson and Maddie Wallis.

Georgia Head Coach Jack Bauerle and his staff have a knack for reeling in the state’s top in-state freestyle sprinters. In 2014 they snagged Annie Williamson out of Oconee High School, and this past season they recruited current freshman Katherine Aikins (Lambert High School) and Sandra Scott (from Midway, Georgia—did not compete for a high school team).

By the time Baum arrives on campus, the Bulldogs will be in desperate need of some freestyle firepower. Current NCAA Champion in the 50 Free, Olivia Smoliga (21.21), will have graduated, as well as NCAA finalist in the 50 and 100 Free, Chantal Van Landeghem (with best times of 21.74 and 47.48, respectively). In addition, Emily Cameron, who swam on Georgia’s 200 Free Relay that placed third at last year’s NCAAs will also have graduated (she was the second fastest leg on the relay with a 21.83 split).

In terms of flat starts, Blaum’s best time would have tied for second with Williamson on Georgia’s list of top performers in the 50 Free during the 2015-2016 season (neither Kylie Stewart, Meaghan Raab, nor Cameron swam the event individually at a tapered meet, and Van Landeghem redshirted last season to train for the Olympics). Her 100 Free and 100 Fly times would have been just outside Georgia’s top five swimmers in those events.