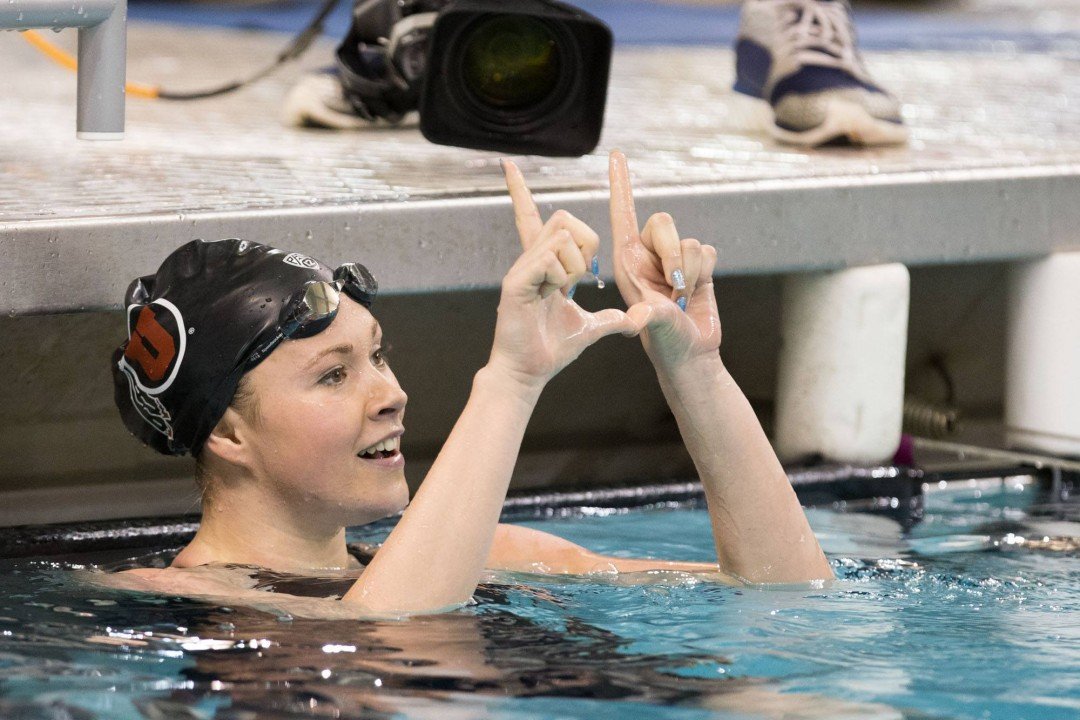 Stina Colleou won a pair of events for the Utah women in their Pac-12 dual against Oregon State Archive photo via Tim Binning/TheSwimPictures.com

The Utah Utes and BYU Cougars each bettered Oregon State–157-96 and 178-83, respectively–on Friday night in Salt Lake City in a pseudo-double-dual meet format.  Although they competed at the same time against the Beavers, Utah and BYU do not appear to have competed “officially” against each other; the in-state rivals competed in a relay meet last weekend.

Utah’s Jordan Anderson was a three-event winner, and teammate Stina Colleou doubled down in both breaststroke events.  Anderson–sister of Olympians Alyssa Anderson and Haley Anderson--scored first place points in the 200 fly (2:05.16) and 500 free (5:07.70), and also posted the field’s top time in the 200 IM (2:08.64, swam as exhibition after Utah had clinched the team win).  Colleou came back on freshman teammate Mariah Gassaway to take the 100 breast (1:04.29 to 1:04.86), and dominated the 200 breaststroke in 2:18.48, over seven seconds faster than second place.

For Oregon State, freshman Felicia Anderson won her first collegiate event behind a strong final 50 yards in the 100 backstroke (57.51).  Anderson also led off the 200 medley relay in 26.92–the fastest split in the field–to help the Beavers finish third, ahead of BYU’s teams.

Utah will be splitting up this week, competing at both the Florida Gulf Coast Invitational and the Intermountain Shootout in Grand Junction, Colorado.  BYU will join the Utes in Grand Junction.  Oregon State will take on Cal at home Friday, October 7th.