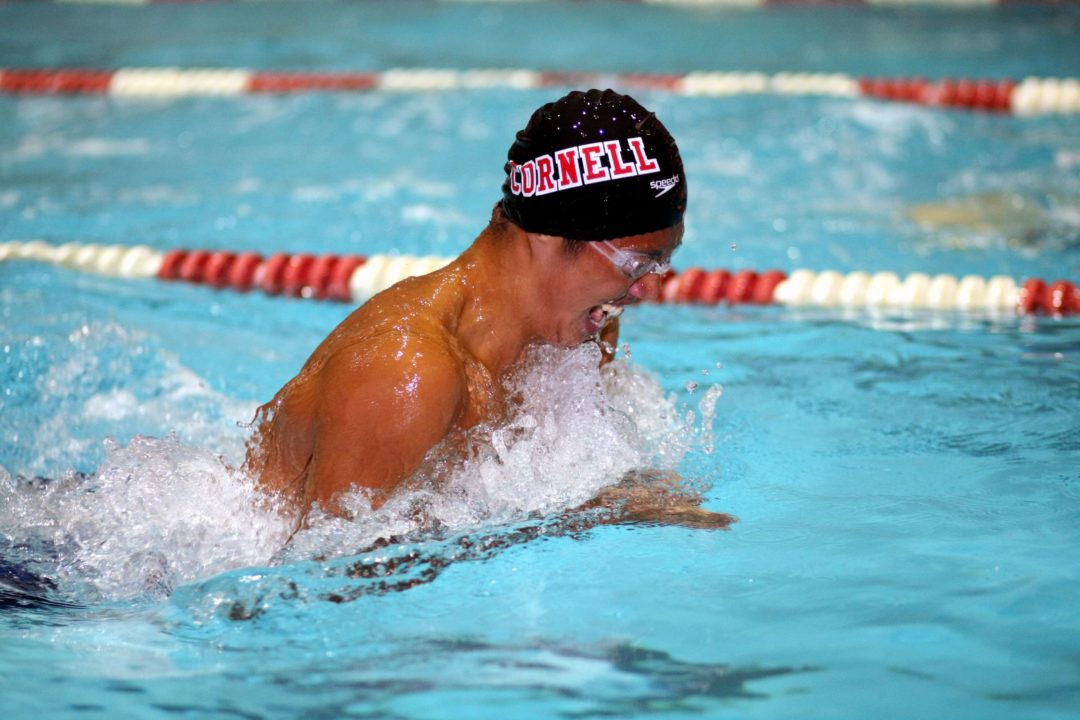 Cornell hosted their final meets in ode to their seniors as both Cornell teams had wins against Brown.

The meet finished with the 400 free relay with the Brown A-relay winning with a 3:04.12 which included Daniel Klotz, Matt Luminais, Ryan Saenger, and Jack Nee. Second place was the Cornell A-relay of Kreher, Harpham, Wilson, and Taylor Adams with a final time of 3:04.61.

Cornell sophomore Jenna Immormino had an absolutely outstanding meet as she took first in all of her events: one relay and three individuals. She accompanied Victoria Kuhn, Kim Jerome, and Stephanie Ah-quah on the winning A-relay for Cornell in the 200 medley relay with a time of 1:42.92. Individually, she went back to back in the 50 and 100 freestyle, winning both with respective times of 23.03 and 49.89. The 100 free time was a new pool record for Immormino. Finally, she took the 100 fly from Maggie Jordan of Brown as Immornino won with a final time of 55.08. Jordan was second with a 56.29.

Distance power house freshman Currie Murch Elliot swept the 1000 and 500 free with ease as she took the 1000 in a time of 10:07.09, which was a new pool record that was previously held by Yale distance stud Eva Fabian. With her final time of 10:07.09, she held solid 30’s while barely touching 31’s the whole race. In the 500, Murch Elliot took the win once again with a final time of 4:55.99 and, once again, took down a pool record that was once held by Fabian. Second place in the 500 was Meghan Viohl of Brown with a time of 4:56.90. Personal side note: I can’t wait to see these two show down at the Ivy League Championships!

Kate Dillione had a solid performance with two first place finishes and two second places finishes. Her win in the 200 free was a 1:48.86 which took down another pool record that was previously held by Nikki Larson of Princeton with a 1:51.78. Second place in the 200 free was Anna Elling with a time of 1:52.35. Her other first place finish was with the Brown A-relay for the 400 free relay along with Reia Tong, Paige Gilley, and Emma Lamothe with a time of 3:26.67. Her second place finishes were behind Immormino in the 50 and 100 freestyle as she finished with a 23.63 and 50.73 respectively.

Victoria Kuhn led off the Cornell A-relay that won in the beginning of the meet and continued to show her sprint strength as she won the 100 backstroke as well with a final time of 56.53. Second place in the 100 back was Ah-quah with a 56.74. Gilley took third with an extremely close time of 56.76.