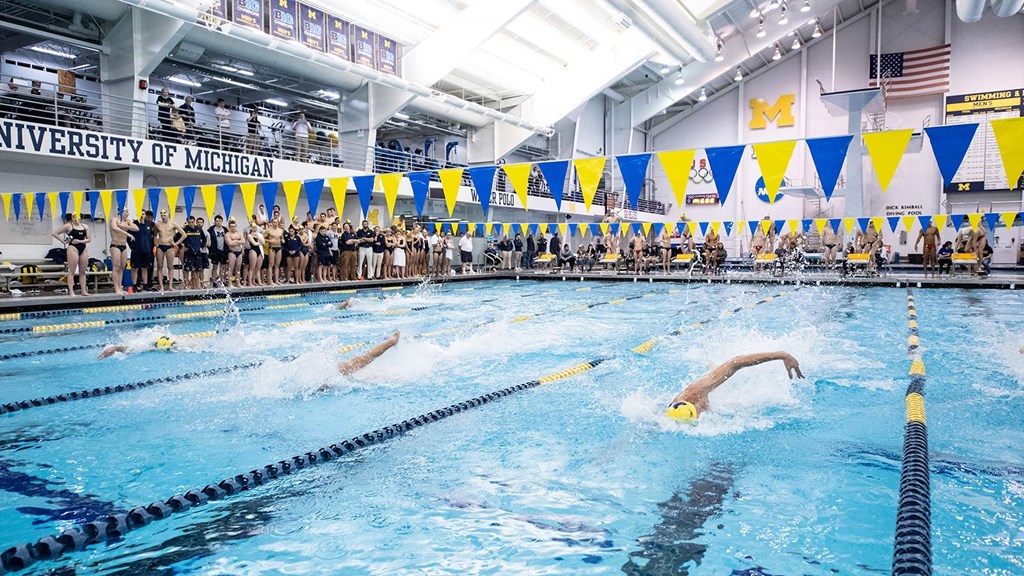 The Michigan men return most of the core that earned them a Big Ten Championship last season despite facing several challenges. Current photo via Michigan Athletics

After a one-year hiatus to the uncertainty surrounding the 2020-2021 season, our college previews back! We’ll be previewing the 2021-2022 seasons for the top 12 men’s and women’s programs from the 2021 NCAA Division I Championships – stay tuned to our College Swimming Previews channel to catch all 24.

It was a rough season for everyone, but Michigan may have had it a bit worse than most of the schools who finished ahead of them at NCAAs. The Big Ten didn’t really start competing until January, with a truncated dual meet season, and then Michigan was kept out of the water for three weeks due to Covid concerns.

Still, the Wolverines rolled to their second-straight (and 42nd overall) Big Ten Conference championship, winning the team title by 44 points over Indiana. The relays were dominant, and sophomore River Wright became one of the breakout stars of the 2020-21 season.

They couldn’t quite keep that momentum rolling into the NCAA Championships, however. Projected to score 182 points and finish 9th (not taking diving into account), Michigan instead scored 106, tying with Arizona for a 12th-place finish. Only one swimmer, senior Gus Borges, made an ‘A’ final, and the relays couldn’t quite match their times from Big Tens, but there was still enough in the tank to come close to cracking the top 10.

The bad news here is that Michigan loses Gus Borges, who led the team in NCAA scoring with 14 points and anchored the medley relays.

The good news is that they’re certainly not bereft of talent. Wright couldn’t match his 19.3/42.5 from Big Tens at NCAAs, but those times aren’t far off what it took to score at nationals.

Wright’s classmate Cam Peel actually improved from Big Tens to NCAAs and took 16th in the 50 free. Those two will form the core of the sprint free group in Borges’ absence, but there’s more.

Auburn transfer Nik Eberly brings in a 19.38 50 free. Breaststroker Will Chan also has some sprint chops, hitting a lifetime best of 19.57 in the Big Ten prelims before finishing 46th at NCAAs.

Israel’s Gal Cohen Groumi has the potential to be a big relay asset for the Wolverines at the very minimum. He split 1:46.41 anchoring Israel’s 4×200 relay to a national record in the prelims at last month’s Olympic Games. His flat-start free times convert to 20.87/43.21/1:35.14.

Patrick Callan returns after earning a spot on the USA’s Olympic 4×200 free relay team. He’s more of a mid-distance guy – he made the ‘B’ final in the 500 and the 200 free at last season’s NCAAs, but he has the range to possibly be a relay piece on the 4×100 free, ala a Kieran Smith or Drew Kibler.

This is one discipline where we definitely expect Michigan to outscore what they’re projected to under our system.

Senior Patrick Callan returns after placing 13th in both the 200 and the 500 free, and he should be a fairly safe bet to at least make those consol finals again, especially after making the U.S. Olympic team this summer.

You don’t see too many college men make the U.S. Olympic team after scoring exactly zero points for his college team at NCAAs, but that was exactly the case for Jake Mitchell. He had a strong debut at Big Tens, winning the 500 free, taking 4th in the 200 free, and 2nd in the 1650 free, but he couldn’t match any of those times at NCAAs. At a minimum, he should be good for ‘B’ final points in both of the longer freestyle events.

Additionally, freshman Connor Hunt, a Class of 2021 Honorable Mention, comes in with lifetime bests of 4:23/15:09, and a sub-9:00 in the 1000. While he’s certainly not a lock to score at NCAAs as a freshman, he’s certainly the type of swimmer that the Michigan distance machine seems to do well with.

Backstroke has been a weakness for the Wolverines for a while now, but Wyatt Davis performed admirably at Big Tens, leading off in 21.0 and 45.6 on the medley relays, and finishing 4th in the 100 and 2nd in the 200 back individually. His season-best 1:40.68 in the 200 would’ve scored had he matched that at NCAAs.

They also bring back Mason Hunter, who qualified for both breaststrokes and went 51.93 in prelims at Big Tens. Freshmen Cameron Luarde and Brendan Fitzpatrick add some breaststroke depth, with the latter having gone 1:01 in long course.

Wright returns after his breakout Big Tens in which he split 44.8 on Michigan’s medley relay, then went 45.2 in prelims of the individual 100 fly before DQing in finals. He earned 15th in that event at NCAAs with a 45.88. If Cohen Groumi swims this event, that’ll give the Wolverines two potential scorers.

On the other hand, the 200 fly is a weakness for the team. Last year’s top performer, Spencer Carl, finished 6th at Big Tens with a 1:44.8 and didn’t qualify for NCAAs.

It doesn’t feel all that long ago that Michigan had guys like Dylan Bosch and Charlie Swanson regularly making NCAA ‘A’ finals in the IMs, but last year, the Wolverines didn’t score a single point in either event.

Michigan’s top IMer is Jared Daigle, who finished 4th in the 200 IM and 3rd in the 400 IM at Big 12s with a 1:43.9/3:43.2, but like many Michigan guys, couldn’t quite match those times at NCAAs. That 3:43 would have scored at NCAAs, so again, watch for Michigan to pile up some more points if they end up able and willing to approach the season differently.

Cohen Groumi could also contribute here, owning a sub-2:00 in the long course 200 IM, which converts to roughly a 1:44.

Michigan returns its only NCAA-qualifying diver from last year in the form of Ross Todd, who’s taking advantage of a 5th year of eligibility as a grad student. He does have scoring potential, having finished 17th last season on platform. British national Cameron Gammage also joins the team.

The relays are in solid shape, with Borges’ four swims being the only four slots Michigan needs to fill. Peel will presumably fill his spot on the medley relay anchors, while some combination of Eberly or Cohen Groumi will jump in on the 200 free relay.

With two returning Olympians and a pair of 1:33 legs from freshman Danny Berlitz and Davis last year, the 800 free relay feels like it’s bursting with potential, especially with Cohen Groumi entering the fold.

With only one key loss, a couple of Olympians returning, and a few intriguing pieces coming in, it feels like this team should be in even better shape than it was last season. If they choose to focus on Big Tens, as they seemed to last year, they may have trouble cracking the top 10 at NCAAs, especially as they’re not benefiting from 5th year-seniors as much as most of the teams above them in last year’s standings. But this also feels like a team that is overflowing with potential, and it wouldn’t be a surprise to see them move up 4 or 5 spots from last year’s finish, either.

Yo this seems kinda disrespectful? Mike bottom one of the greatest coaches of all time with some killer recruiting classes and you put them at 12? Wow

This is not a pre-season ranking.

This is their finish at last year’s NCAA Championships.

We will do our preseason rankings later.

Danny Berlitz is not listed on UMs roster… any idea why? That’s a significant loss…

Michigan is coming for more than just the Big Ten crown this year!

are you going to do one for arizona? they tied michigan for 12th

I think Big10s will be a great showdown this year between Michigan and Indiana… a slight edge to the Hoosiers with a healthy Blaskovic and Fantoni plus Burns & Frankel and their entourage of divers should be enough…but will be a close meet.

I love seeing these articles and thank SS for them, but this one is full of errors. It is Ross Todd, Mason Hunter (not the other way around). Big 10 not Big 12.

2015, behind Minnesota and Indiana. That was Minnesota’s 4th-straight Big Ten title, they had Kierra Smith and a very deep team with great divers and without a lot of swimming superstars. Indiana DQ’ed the 400 medley relay or they would have won the title.

What about for men’s? I think that was the question.

Behind Indiana and Minnesota, though Michigan still was the highest-placing Big Ten team at NCAAs that year at 8th. Northwestern (with Matt Grevers, Kyle Bubolz, and Mike Alexandrov) wasn’t far behind at 10th, Minnesota 11th, Indiana 12th.

At Big Tens, Indiana had 11 A finals appearances in diving. Minnesota and Michigan had 1, combined. Haven’t done the math on whether that explains the full difference in scoring, but it definitely explains the magnitude of the margin, at least.

That was when they were underachieving with Bowman