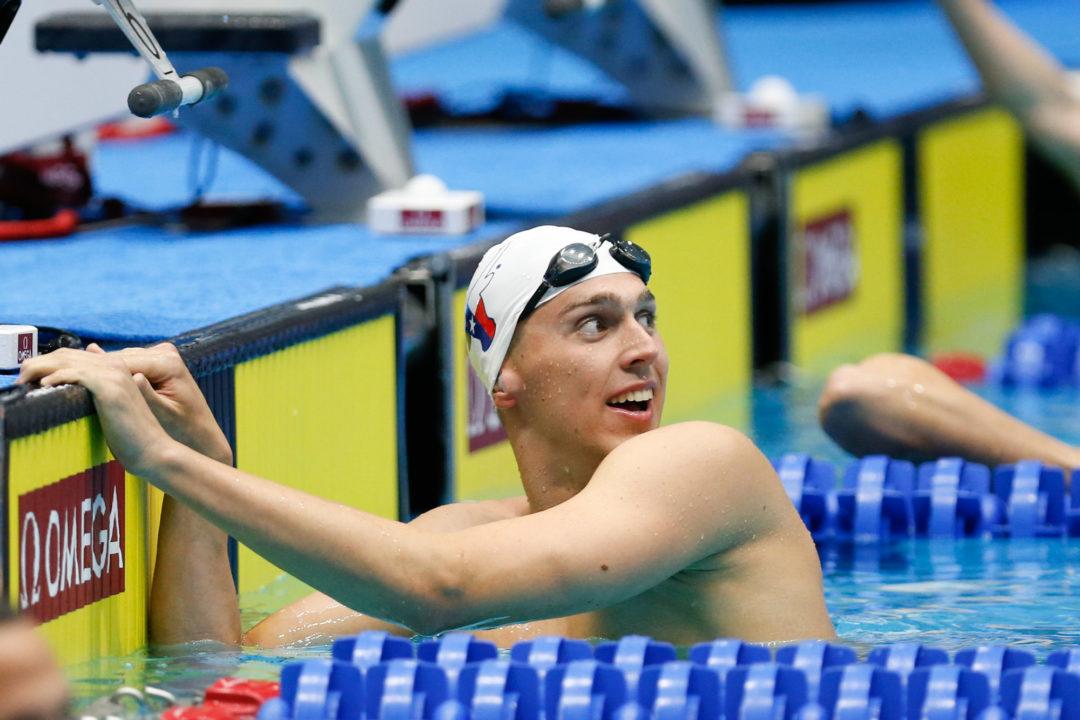 Texas' Clark Smith made his way to the wall ahead of Michigan's Felix Auboeck, South Carolina's Akaram Mahmoud, and Northwestern's Jordan Wilimovsky, as they became the 4 fastest 1650 freestylers in history. Current photo via Tim Binning/TheSwimPictures.com

Swimming fans in in Indianapolis, Indiana witnessed the fastest heat of 1650 freestylers in history on the final night the 2017 Men’s NCAA Championships in the IUPUI Natatorium. In what Sam Kendricks described as “the greatest race he’s ever witnessed,” 4 men battled stroke-for-stroke through the final portion of the race. Texas’ Clark Smith made his way to the wall ahead of Michigan’s Felix Auboeck, South Carolina’s Akaram Mahmoud, and Northwestern’s Jordan Wilimovsky, as they became the 4 fastest 1650 freestylers in history.

4 swimmers in this heat beat the American, U.S. Open, NCAA, and Pool records and were within 1.04 seconds of each other in a nearly 14.5 minute race. This is the greatest NCAA race in history, hands down.

Absolutely insane, and one of these guys is only a freshmen.

How fast could these men have swum if the 1650 were on day 1 or 2? This race was perhaps the greatest of say history.

Let’s give some credit to PJ Ransford here too – he made himself the sacrificial lamb in this race. Not sure the record gets broken if he wasn’t pushing the pace for the middle part of that race.

57
-2
Reply
outside smoke
Reply to  Doug

Hater why do u dislike Smith? You just jealous??

Wow that was fast, to say the least.. What a way to go out for Clark. I still don’t understand how he closes these distance races in 22s and 23s, but he does it. He’ll be dangerous this summer in the 400