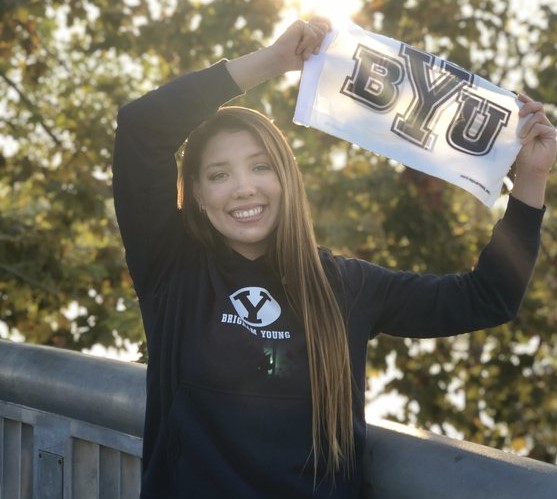 Freeman's best time in the 100 yard backstroke is faster than the BYU School Record in that event by almost half-a-second.

Chloe Freeman of Woodland, California has announced her commitment to Brigham Young University for the fall of 2020. Freeman recently moved from Nevada, where she was a member of the Sandpipers of Nevada, to California, joining DART Swimming.

Before her departure from Nevada, Freeman won multiple events at the NIAA 3A & 4A State Championships last May. She was the state champion in both the 100 fly (56.55) and 500 free (5:00.11). Her victories played a key role in her school, Palo Verde, winning the meet. More recently, swimming at the 3rd Annual Joyce Lanphere Invite, Freeman touched in 52.86 in the 100 back. As well as being faster than BYU’s best swimmer in the event last year by half a second, it would have also been enough to finish 2nd at the 2020 Mountain Pacific Sports Federation (MSPF) Championships. She is also an Olympic Trials qualifier, having swam a 4:15.77 in the 400 free in November of 2018.

The time is also faster than the current BYU school record, which is a 53.20 set by Hailey Campbell in 2014.

Freeman is a huge pickup for a BYU team who finished 2nd at the 2020 MPSF Championships. With her best times, she would have led the Cougars in 5 seperate events. Her top times would have qualified her for the A-final in all of her main events at the MPSF Championships. She also would have won the conference championship in the 200 fly, an event in which BYU failed to qualify anyone for the A-final. As well as individually, she will provide a huge boost to relays, where she will be capable of contributing in multiple ways as needed.

As well as the impact she will have on both the team and conference, Freeman will also be near the NCAA Swimming and Diving National Championships provisional “B” cuts immediatly after arriving on campus. Her time in the 200 fly is only .07 off of the B-cut. This year the cut line for qualifying for the Nationial Championships in the event was 1:56.06.

BYU has a recent history of producing success from their freshman, swimmers from the team have been awarded the MPSF Freshman of the Year award the past two seasons.  In 2019 the award was given to Gwen Gustafson, who this year won the 100 free and took second in the 50 free. This year the award was given to Kate McBratney, who won both the 200 and 400 IM.

Congratulations! Definitely a huge pickup for BYU with a bright future!

With the mid distance free and 200 fly times, surprised she doesn’t give the 200 back a shot?