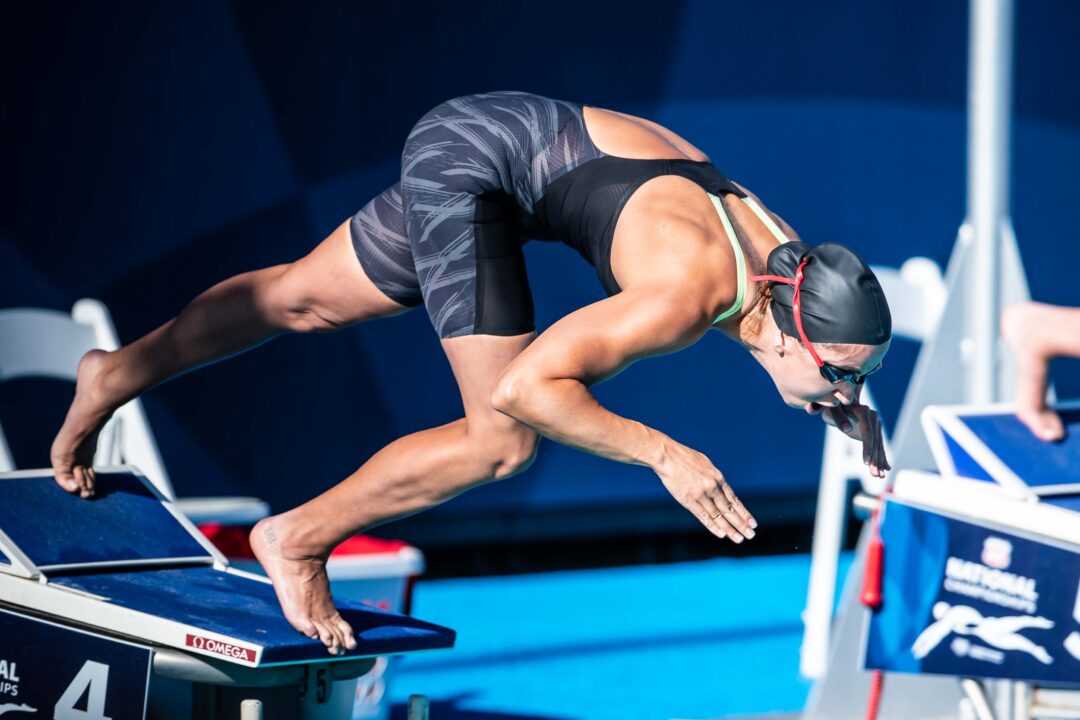 The 2022 British Universities & Colleges (BUCS) Short Course Championships concluded from Ponds Forge over the weekend but not before Loughborough University put on a show across several women’s events.

The 25-year-old first topped the women’s 50m backstroke in a time of 27.03, a mark not too far off her own personal best. That remains at the 26.88 she registered during the 2021 International Swimming League (ISL) season.

DeLoof also scored the victory in the women’s 50m free, clocking a time of 24.23. That checks in as a BUCS Record and nearly a lifetime best for the former Wolverine. Her time falls just .17 outside of her personal quickest of 24.06 also logged during the aforementioned ISL competition.

The women’s 100m back also saw DeLoof roar to the wall first, producing a time of 58.79 to beat the field in the only time under the 59-second threshold.

Also contributing to the Loughborough women’s overall trophy win was Fleur Lewis. Competing in the women’s 1500m freestyle, the 18-year-old came away with gold in a mark of 16:02.21, scoring a new BUCS Record in the process.

Belonogoff also did damage in the 100m breast, cracking a mark of 1:04.41, a new career-best. Entering this meet, Belonogoff’s PB sat at the 1:04.90 she produced this same time last year. As such, she dropped about half a second from that previous mark to take the gold here.

Belonogoff switched her sporting citizenship from Great Britain to Russia in September 2020. We’ve reached out to Loughborough staff to find out if there is any potential for the breaststroking ace to move back to GBR from a representation standpoint.

In terms of Olympic qualification, the path may be slightly easier within GBR, with both Molly Renshaw and Sarah Vasey having announced their retirements this year. Whereas in Russia, Belonogoff has the likes of multi-Olympic medalist Yuliya Efimova and rising star Evgenia Chikunova with which to contend.

Coming back to this meet at Ponds Forge, aforementioned Swedish star Hansson did grab gold in her bread-and-butter breaststroke discipline, reaping the top prize in the 200m distance. Hansson got to the wall in a time of 2:21.83 to top the podium, with Kara Hanlon snagging silver in 2:24.12 while Belonogoff rounded out the top 3 in 2:24.71.

Additional winners on the women’s front included Freya Colbert of Loughborough, with the 18-year-old claiming gold in the 200m free and the 200m IM.

In the former, Colbert stopped the clock in a mark of 1:55.85, tying the same time as Paige Madden for co-gold. In the latter, Colbert fired off a time of 2:10.20 to become GBR’s 16th fastest performer in the event. Her result here overtook her previous personal best of 2:12.01 from 2021.

Laura Stephens reaped women’s 100m fly gold in a time of 58.67 while Stirling’s Katie Shanahan produced a time of 2:05.90 to top the women’s 200m back podium. Shanahan was recently named Emerging Swimmer of the Year at the British Swimming Awards.

just a shame half the Loughborough team are not British swimmers, soon the programme will only be international swimmers

Must be more than half now?

I think the coaches get bonus money from federations so why should they care about British swimmers?