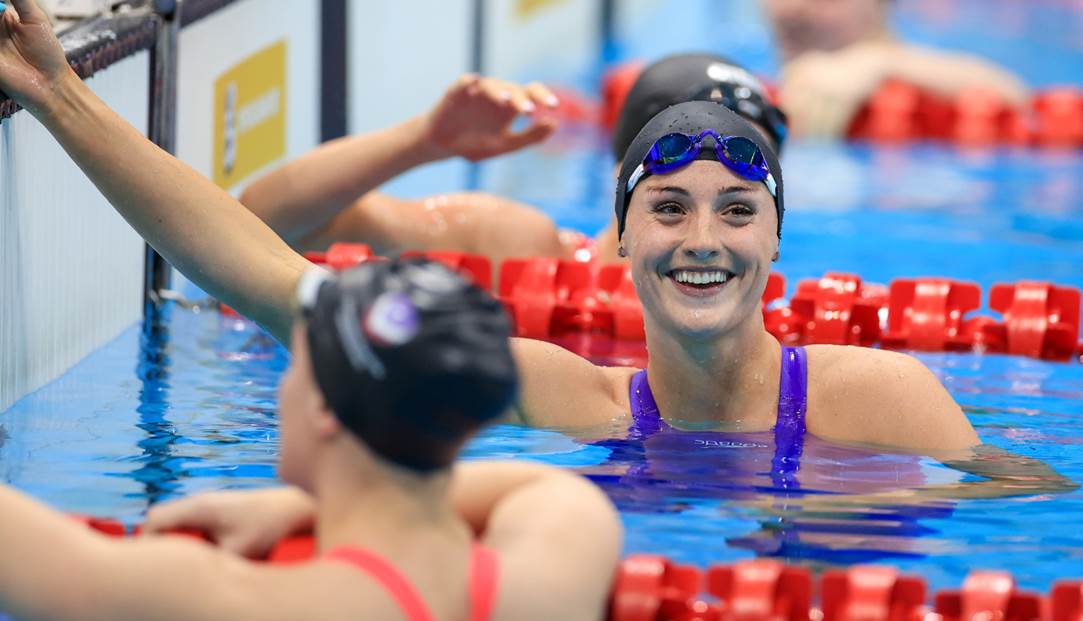 The 26-year old native of England represented Great Britain at the 2016 and 2020 Olympic Games.

Renshaw made her Britidh debut at the 2011 World Championships when she was only 15 years old. That was the first of five long course World Championships that she qualified for. A year later, she won the 200 breaststroke at the 2012 British Olympic Trials, but missed the federation-set time standard for an invite to the London Games in front of a home crowd.

She would make her breakthrough Olympic qualification four years later where she swam both the 100 and 200 meter breaststrokes at the Rio Games. In the 200 breaststroke, her specialty event, she finished 6th after setting a new National Record (2:22.33) in the semi-finals.

In her second, and final, Olympic appearance, Renshaw again finished 6th in the 200 breaststroke in an almost-identical time to Rio.

She won two more European gold medals by swimming a leg of the title-winning 400 medley relays in both 2016 and 2020.

In what will ultimately be Renshaw’s final year in the sport, she made the final in both the 100m and 200m Breaststroke events at World Championships number five in Budapest, before rounding off her career with a Commonwealth bronze medal in the 4x100m Medley Relay with Team England in Birmingham.

“I just want to say a massive thank you to everyone who has supported me over the years. I have had the best support network I could ever have dreamed of at Loughborough. We’ve got world-class facilities and the staff are absolutely world class as well,” she said.

“Obviously a massive thank you to Dave (Hemmings), my coach, he has coached me for the past six years, and to everyone else – whether that is physios, strength and conditioning, sports analysis team. Everyone has, in some kind of way, been a contribution to my career and my success, and I definitely wouldn’t be where I am without them.

“I want to say a massive thank you to my family and friends. My family are the reason I am where I am today – without my parents driving me to training at silly o’clock in the morning, I definitely wouldn’t have achieved what I have over the years, so they are a massive part of this. The athletes I’ve had the pleasure to work with over the past 10 years, they’ve made a massive contribution as well. Surrounding yourself with a really good team is key to success.

“I am so grateful that, over the past 10 years, I’ve had an amazing network and such amazing facilities.”

“It’s really sad to let the sport go, but I think it’s the right time for me. I have to be a little selfish and move on with my life. I never really dreamed of achieving this much in the sport – to have gone to two Olympics and numerous World Championships, European Championships and Commonwealth Games, it’s just been an absolute dream,” she added.

Performance Director Chris Spice said: “Molly’s contribution to British Swimming has been exemplary throughout her decade with us. She has become one of our most experienced athletes and has always been a consistent performer, in and out of the water. She was a great ‘racer’ who came to life in the arena.

“Her achievement of medals at World, European and Commonwealth level are something she should be very proud of, as well as the senior role she has taken in recent years as a wealth of talent has come through the ranks on the women’s side of our team. All at British Swimming will wish Molly the best for whatever comes next.”

RIP to the boys who watch swimming for reasons other than swimming. This and Blume has been a devastating loss

Great athlete with a seriously impressive career. GB (and world) swimming will miss her hugely!

Leading in to Tokyo, she was a hot favourite to medal.

Her performance there was perhaps below expected. Afterwards she never really demonstrated the same level.

JFC could you just try not to be creeps for one minute?

I though she had a few more in her