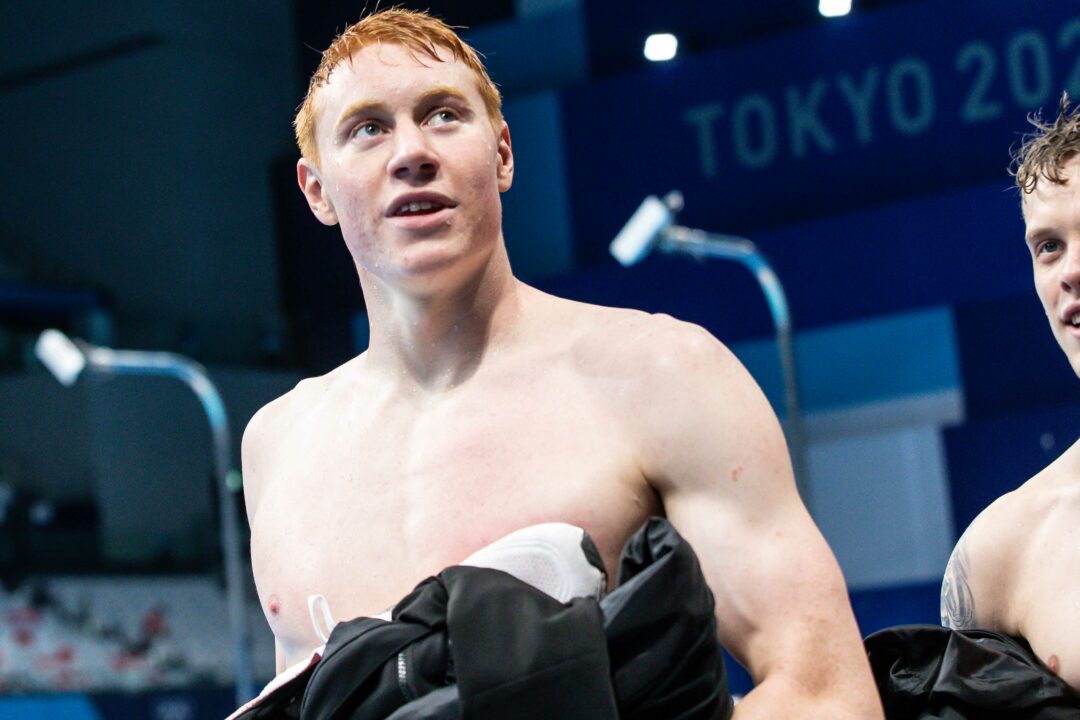 Two years of hard work, perseverance, and Olympic golds culminated in a night of honors for Tom Dean.

The 22-year-old freestyle ace was honored more than once during the British Swimming: The Awards 2021-22 which took place on Saturday, November 12th.

Dean took home the ‘Outstanding Swimmer of 2021-22’ award, recognizing the Bath athlete’s two Olympic gold medals from the 2020 Olympic Games and a trio of bronze medals from this year’s FINA World Championships in Budapest.

Note: because COVID canceled these awards last year, this award was given for results over the course of two years.

In Tokyo, Dean wowed the world by taking individual gold in the men’s 200m freestyle, becoming Great Britain’s first Olympic gold medalist in the event since 1908. He was also a critical member of the gold medal-winning British men’s 4x200m freestyle relay.

One year later in Budapest, Dean placed 3rd in the 200m free and helped his nation score the same result in the 800m free relay and 400m medley relay.

The results in Tokyo were after the Maidenhead native battled COVID-19 twice in the lead-up to the British Olympic Trials.

During this weekend’s awards ceremony, Dean was also honored with the inaugural Maurice Watkins Champion Athlete prize, with the recognition named after British Swimming’s late Chair.

Dean reflected on the company he was up against in the running for the prestigious honors.

“There is such competition that I was up against tonight. The three other guys nominated alongside me for the Outstanding Swimmer Award (Adam Peaty, Ben Proud and Duncan Scott) are all record-breakers in their own right in the last two years, from Olympic medals to defending titles to backing up competition on top of competition – so to be able to step up there and win the award was incredible.

“I shouted them out in my speech and said anybody could’ve won this award, it’s a real testament to the strength of British Swimming at the moment. It’s so great to be a part of that, to be in that energy and to be part of a driving force within, pushing British Swimming to greater heights, it was brilliant.”

Katie Shanahan was another honoree within the world of British swimming, taking home the Emerging Athlete trophy.

18-year-old Shanahan earned 5 medals at the 2021 European Junior Championships, including claiming gold in the 200m and 400m IM races. She added a pair of bronze medals to her resume by placing 3rd in the 400m IM and 200m back events at this year’s Commonwealth Games.

Maisie Summers-Newton was recognized as the Outstanding Para-Swimmer for 2021-22 for having won two gold medals in Tokyo. She was also a triple gold medalist at this year’s World Championships, topping the podium in the 200m IM (SM6), 400m free (S6) and 100m breast (SB6).

Katie Shanahan on Being Named Emerging Swimmer of the Year

WINNERS AT BRITISH SWIMMING: THE AWARDS 2021-22

Dean paid homage to Hwang Swoons waves + his 4×200 teammates for rescuing his lead off!

Reminds me how slow that 200m final was in Tokyo. Not much faster than the 2004 Olympic winning time. I don’t think we will see a 1.44 winning an Olympic final again, especially with Popovic into 1.42 high, he’s set the bar for emerging 200m swimmers. Still, a great result for Dean, he’s got what we all dream of.

Figure it must be some Olympic carryover glow. I agree with you – pulling off the triple in a year where so few even tried it was top honors to me. Layer the SC World Championship on top, which I think falls into this award’s range…

Well, apparently they looked at 2021 AND 2022 awards. So, this award was essentially the “Olympic gold medalist” award – which is a similar approach taken by many nations in their awards, including USA Swimming.