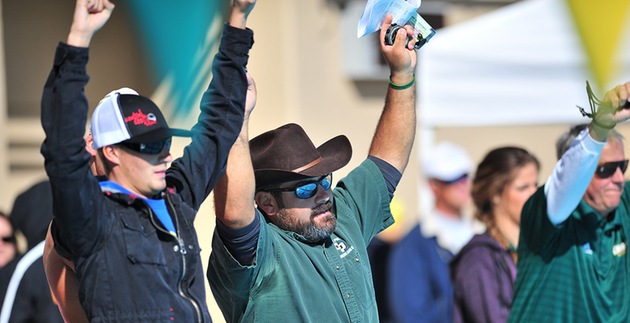 Phil Yoshida (2nd from left) has served as an assistant with the Cal Poly swimming & diving program during the tenure of 2 different head coaches. Archive photo via Cal Poly Athletics

Cal Poly has announced the promotion of long-time assistant Phil Yoshida to interim head coach of the men’s and women’s swimming & diving program this week. That’s a boost of confidence for Yoshida as the Mustangs seek their new head coach after Tom Milich retired at the conclusion of the 2019-2020 season.

This is one of 5 NCAA Division I swimming head coach positions that have been announced as being open so far.

Yoshida worked under Milich as an assistant for all 14 years of the latter’s career with Cal Poly, but actually preceded his former boss with the program. The first 5 years of his tenure were served under head coach Rich Firman.

“We had already selected Phil as a finalist, so we feel in the best interest of program continuity, the best option was already working on our campus in Phil Yoshida,” said director of athletics Don Oberhelman. “We thank all those who expressed an interest in the position. We had a very talented candidate pool.”

Prior to his time at Cal Poly, Yoshida served as a coach for De Anza Cupertino Aquatics from 1997 through 2000. Since 2007, he has also coached with the San Luis Obispo Swim Club. He’s currently the head coach at the SLO Swim Club.

Yoshida swam at Cal Poly from 1999 through 2001 where he finished in the top 8 at the Big West Championships twice. After graduation and during the start of his coaching career, he worked with the school’s fruit science department, managing the citrus, avocado, and deciduous orchards on campus.

“I am so excited about the opportunity to lead our young women and men,” said Yoshida. “Swimming has been near and dear to my heart for most of my life. Over 20 years ago, Cal Poly gave me a home and I am so happy to continue to give back to the university and program that has given me so much.

“The key to our continued success will be recruiting based on the strength of the school in addition to continuing a culture of helping swimmers and divers improve,” Yoshida added. “Developing talent and helping student-athletes reach their potential in and out of the pool is a cornerstone of our program.”

Last season, the Cal Poly men finished 5th out of 6 teams at the MPSF Conference Championship meet while the women placed 6th out of 8 teams.

The combination of Milich and Yoshida coached Cal Poly to 21 individual conference titles. The pair also sent 6 swimmers to the NCAA Championship meet.

“Taking a look at our recent successes, all have one thing in common – a desire from the student-athlete to go above and beyond on a consistent basis and trust in the coaches that what they are being asked to do will make them better,” said Yoshida. “Cal Poly student-athletes are an intelligent bunch that need to be challenged.
” ‘Rising to the occasion’ means as much to the coach as it does to the athlete,” Yoshida added. “I embrace the challenge to be that coach, motivator, leader, mentor and friend to this and future generations of Cal Poly Mustangs.”

Congratulations Phil!!! I look forward to seeing what you accomplished.

““We had already selected Phil as a finalist, so we feel in the best interest of program continuity, the best option was already working on our campus in Phil Yoshida,” said director of athletics Don Oberhelman. “We thank all those who expressed an interest in the position. We had a very talented candidate pool.””