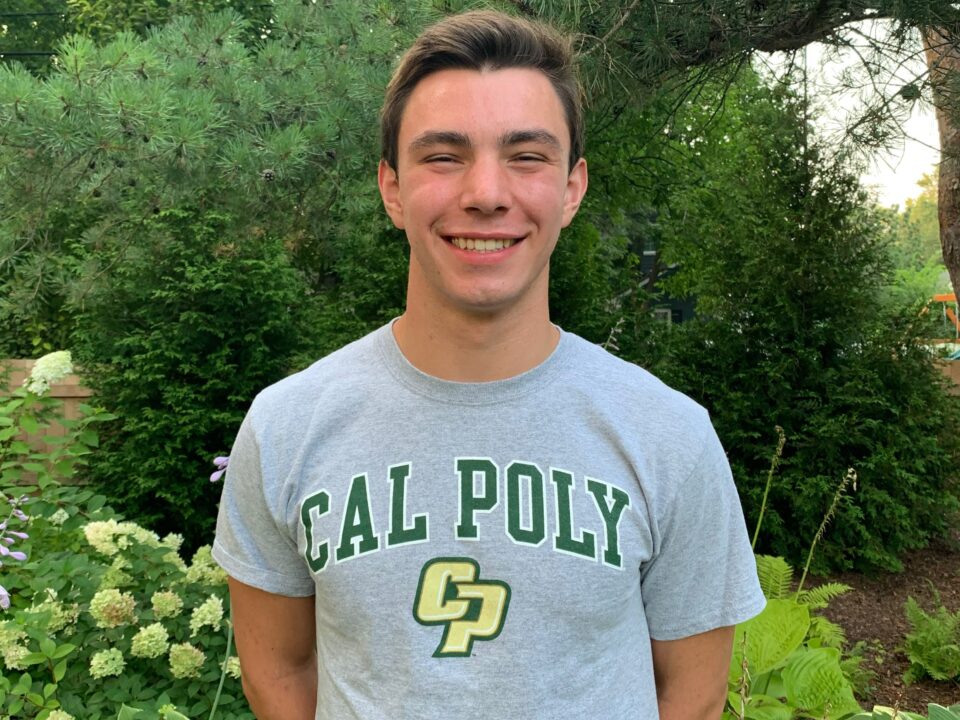 Newlands will bolster a breaststroke group that wasn't able to place anyone in the top-8 at last season's conference championships.

Electing to travel across the country to continue his swimming career, Will Newlands of Winnetka, Illinois has announced that he will be swimming at California Polytechnic State University (Cal Poly) beginning in the fall of 2022. Newlands currently swims for New Trier High School and New Trier Aquatics.

“I am super excited to announce my verbal commitment to continue my academic and athletic career Cal Poly SLO! I want to thank my family, coaches, friends and teammates for always supporting me. Go Mustangs!”

His best times in the breaststroke events come from March of 2021. Racing in separate meets on back-to-back days, he first hit a new best time in the 100 breast at the CSL South Conference Championships. There, he blew past his previous best time of 59.90, dropping over two seconds to touch in 57.89. The next day he competed in the 200 breast at an intrasquad meet hosted by New Trier Aquatic. He again had a huge time drop, shaving nearly six seconds off his previous best to touch at 2:07.88.

The Cal Poly men finished 4th at the 2021 MPSF Conference Championships, falling to BYU, Hawaii, and UC-Santa Barbara. The breaststroke events were a weak point for the Mustangs, with no swimmer cracking the top-8 of either event at the timed finals-only meet. Of the team’s top breaststrokers, only Andre Yarcan will still be with the team when Newlands arrives on campus. While he didnt’ compete at the conference meet last season, he holds the team’s top 200 breast so far this year, having gone a 2:09.05 at the Roadrunner Invitational.

In 2021 it took 56.96/2:14.44 to crack the top-16 at the conference meet. The meet will likely look quite different by the time Newlands graduates, as BYU has already announced their intent to join the Big-12 in the coming years.

When Newlands graduates from high school, he will be leaving one of the most storied high school swim teams in the country. New Trier has long been a force in Illinois high school swimming and was among the top-64 schools in the National Interscholastic Swim Coaches Association (NISCA) bracket done during the pandemic.