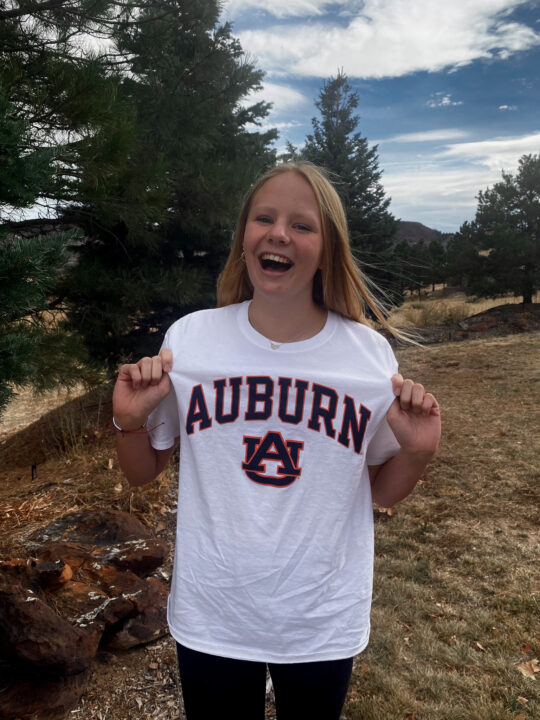 High school junior and 200 breast Olympic Trials qualifier Aislyn Barnett has committed to join the Auburn Tigers in the fall of 2023. Current photo via Aislyn Barnett

Aislyn Barnett, a high school junior from Littleton, Colorado, has committed to join Auburn University’s class of 2027. Barnett is primarily a breaststroker who attends Heritage High School and does her club swimming for Aces Swim Club in Denver’s southern suburbs.

Barnett has long been one of the country’s top breaststrokers for her age, having qualified for the 2020 Olympic Trials as just a 14 year old in 2019. At last year’s Colorado High School 4A State Championships Barnett won the 100 breast in a lifetime best of 1:02.44. At the club level, Barnett had a massive breakout swim at the 2019 Winter Juniors in the 200 breast, where she dropped a three second lifetime best to win the B final in 2:12.99. She also competed at last summer’s Wave II Olympic Trials in the 200 breast, where she finished 45th.

Barnett projects to make an immediate impact when she arrives in Auburn in the fall of 2023, as her best time in the 200 breast would have scored in the C final of last year’s SEC Championships. She will still have some improvement to make in the 100 breast before she is able to contribute at the conference level, however, as it took 1:01.48 to score at last year’s SEC’s.

Auburn’s breaststroke group is currently led by fifth-year All American Carly Cummings and sophomore Brynn Curtis, who scored in both the 100 and 200 breast at SEC’s and qualified for NCAA’s during her freshman campaign for the Tigers . While Cummings will graduate before Barnett arrives on campus, Curtis and Barnett will overlap for one season.

Auburn has been picking up a lot of swimmers. They have to be winning the recruiting battle against Bama, right?

Auburn’s 2023 class is a little better than Alabama’s so far. But, I’m curious to see how that will shift after Alabama’s mid-season meet.