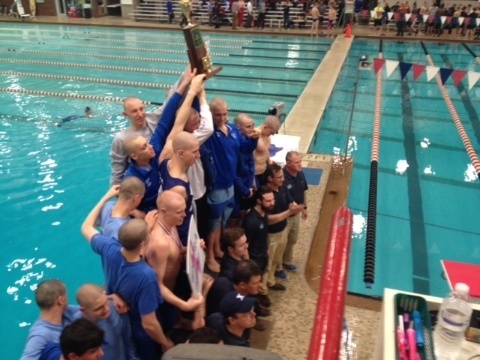 St. Xavier was named the NISCA Boy’s All Time Dual Meet Champion after battling for the title with Baylor, Southlake Carroll, and North Allegheny. Archive photo via St. Xavier Athletics

The National Interscholastic Swim Coaches Association (NISCA) has announced the results of its May Madness Tournament. There were a total of 151 teams entered into the tournament to determine the All-Time National Dual Meet Champion.

According to NISCA, the tournament is intended to create a fun activity in light of the coronavirus pandemic, especially since swim meets around the country have been canceled.

In order to enter, teams had to fill out a form and include their top times all-time for their entries. Each swimmer was allowed to “swim” up to two individual events and two relays like they would in a traditional high school dual meet.

The big absence here is The Bolles School in Jacksonville, Florida, which appears to have not submitted an entry. The school is the alma mater to Olympic gold medalists Ryan Murphy and Joseph Schooling, among many, many others, and so they would have been a strong contender had they entered the challenge.

Once the field was narrowed down to 64 schools, the regional finals were completed. Teams that made it to the top four in their region include:

[The simulation of the Final Four consisted of two meets: St. Xavier vs. Southlake Carroll and Baylor vs. North Allegheny. The winners, St. Xavier and Baylor, then competed against one another to determine the champion. Much like the girl’s championship, there was a very narrow gap with St. Xavier coming out on top and being named the All-Time National Dual Meet Champion.]

Some of the highlights included:

Located in Chattanooga, Tennessee, the boy’s program has completely dominated the Tennessee State Championships for decades, winning the title a total of 28 times.

One of their standout stars was Trey Freeman, who broke multiple distance NAG records and formerly held the 200 freestyle National High School Record before Carson Foster erased it. Freeman was also a member of the US World Junior Championships squad in 2017 and made the Junior Pan Pacs Team in 2018.

The program also gave rise to Bahamian Olympic qualifier Dustin Tynes, who went on to compete at Ohio State. During his time at Baylor, he earned several top 10 finishes at the Tennessee State Championships and was a member of the team that broke the 200 medley relay National High School Record. The previous record was set by the Bolles school, with a squad that included Ryan Murphy, Joseph Schooling, and Santo Condorelli.

Joining Tynes on that relay were standouts Sam McHugh and Luke Kaliszak. McHugh was a multiple Tennessee State Champion and was a member of the USA Junior National Team back in 2013. Kaliszak broke multiple school records during his time with the program and won 2 Tennessee State Titles.

The Baylor School is the only team to put both their boys’ and girls’ programs into the final four of the tournament.

The St. Xavier Aquabombers have won 12-straight Ohio State Swimming Championship titles and have shown a roster full of top talent for decades. Although they never got World Junior Champion Carson Foster to compete for them before transferring, the school has still had insurmountable success over the past couple of years.

Another World Junior Champion, Grant House headlines this team’s roster. During his time swimming for the Aquabombers, House won a total of 13 state championships, primarily in the 200 freestyle and 500 freestyle, the latter of which he currently holds the state record in.

Luke Sobolewski, who now swims for NC State, was a major contributor during his years swimming at Xavier. Individually, he won 3 state titles and contributed a leg to a state record relay alongside House.

The other two legs of that same relay, Justin Grender and Nicholas Perera have also won state titles for the Aquabombers over the past couple of years.

St. Xavier has been a powerhouse for a long time, and while most of the entries are skewed to recency (because swimming keeps getting faster), there’s a couple of really good old-school names on this list, including National High School Record breaker Joe Hudepohl who graduated in 1992 and won Olympic gold medals at the 1992 and 1996 Games; and Jayme Cramer, who graduated in 2001. before winning 2 World Championship gold medals.

Best known for the time the school almost lost the state championship due to an automatic relay takeoff monitor malfunction, the Dragons have been a constant presence in the Texas high school swimming scene.

The best known name to sprout from this program is Stanford standout Jack LeVant. He won Texas multiple state titles as a Dragon, including repeat victories in the 100 fly. He also broke the state record in the 200 free as a senior. In SwimSwam’s rankings of the Class of 2018, LeVant was ranked 11th.

Shortly before LeVant set the 200 freestyle state record, Alex Zettle broke it on his way to several of his own individual titles. As a sophomore, he won the 200 and 500 freestyle titles and later repeated his 200 title as a senior only being beaten in the 500 by future Notre Dame* Star Zach Yeadon.

Like Zettle, Jonathan Roberts took the path from Southlake Carroll to the University of Texas, eventually becoming a major point contributor to a Texas squad that won multiple NCAA Championships. Before this, he won 4 individual Texas State Championships with the dragons, spanning across events such as the 200 free, 500 free, and 100 back. He also represented the US at the 2013 Junior World Championships.

Individually, Wright won several state titles across the Sprint freestyle events and was ranked 7th in SwimSwam’s top recruits for the class of 2019. Now, swimming at Virginia, he has made multiple finals at the ACC championships and has contributed valuable relay legs to the team.

Much like Wright, Gonzalez went on to have a very good college career at Stanford. In SwimSwam’s re-rank of the class of 2018, he moved up to 20th overall. As a member of North Allegheny, he contributed four individual titles in the sprint freestyle events, earning back to back titles in both the 50 and 100 in his junior and senior years.

Mihm, who’s committed to join Gonzales at Stanford in the fall, was also ranked in SwimSwam’s rankings for the class of 2020, coming in at #14 on the original rankings and #15 on the re-rank. At the State Championships in 2019, he won the 50 freestyle and finished as the runner-up in the 200 IM. This year, the meet was cut in half due to coronavirus, but he managed to win the 200 IM before the cancellation.

what about Sacred Heart in Louisville? Must not have submitted.

Just an aside and a “history” lesson about the RTOP’s at the Texas UIL State Swim/Dive Championships…..

Southlake Carroll is not:
“Best known for the time the school ALMOST lost the state championship due to an automatic relay takeoff monitor malfunction”.

MISTAKE: Zettle set 200 freestyle state record in 2017 as a junior, and then LeVant SMASHED it by 3 seconds his senior year(1:36 to 1:33). Then, LeVant went on to win multiple state titles of his own, including a record breaking 500 freestyle Not to mention LeVant’s eventual position on 2019 WC team.

How was Carmel high school I’m Indiana or Chesterton not in this?

They must not have entered.

Do they have a way to view entries/results for lower seeded matchups?

Not that we know of. We asked earlier for stuff and they just directed us to the site linked, which only has lineups for the top 4.

If you click that link, you can at least see the scores.

Braden – I see you are using swimmers from past years. I submit to you the 1961 New Trier High School Team. 5, count em, 5 individual National Record Holders. 200 Medley Relay National Record holder. 2 Olympians and 3 other National Team members. In addition, from the same School District – Sandy Van Kennan went to the Hill School where he was National Prep School Champion in the 50 and 100 Free. He later got second at the NCAA Div I Championships from a Division II School( It was allowed at that time). Tom Hempstead attended Pine Crest where he was National Private School Champion in the 50, 100, and 200 Free( they were listed separate at that time)… Read more »

Titles and records back then don’t mean they are the faster swimmers compared to today’s beasts. The whole point was to use each teams best swimmers ever time-wise. Previous accolades are irrelevant.

Then resume of that team is absolutely amazing, but the best Carmel GIRLS teams would beat 1961 NT boys team.

I remember when new Jersey was allowed to be swim.good for you guys!