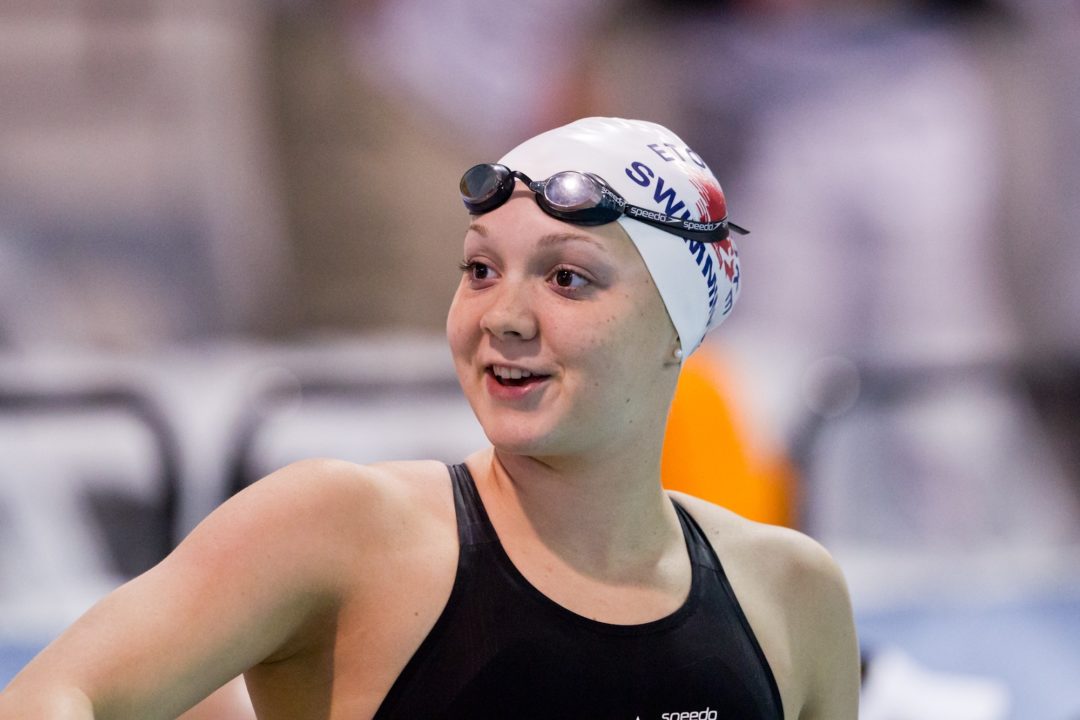 Noemie Thomas kicked off night three of the Mel Zajac International with a vengeance, winning the 100m fly over rivals...

Noemie Thomas kicked off night three of the Mel Zajac International with a vengeance, winning the 100m fly over rivals Katerine Savard and Audrey Lacroix with a time of 59.04. Thomas had to track them both down to the wall in the final 50m, but threw down the fastest last 50 of the night to do so. A few weeks ago, Thomas failed to qualify for the Canadian Pan Pac and Commonwealth Games teams, but this weekend has shown true promise by bouncing back from that experience. Thomas will be competing next year for Cal and is showing that as a young swimmer she’s capable of moving past disappointment to focus on future results.

In the mens 100m fly Geoff Cheah from Club Wolverine took down favorite Coleman Allen 54.10 to 54.51. Allen trailed slightly behind Cheah at the 50m mark and was never able to makeup the room needed to pass him on the final lap. Cheah added his second win of the meet with that victory after winning the 50m fly last night.

Missy Franklin seems to be on a gold rush here in Canada, picking up yet another gold, this time in the 50m backstroke. Franklin was the only swimmer to dip under 29 seconds with a 28.99 taking down training partners Rachel Bootsma and Elizabeth Pelton who’ve both been some of her stiffest competition at this meet. Bootsma touched in at 29.20, Pelton in 29.29. Canadians Brooklynn Snodgrass and Dominique Bouchard also swam well taking fourth and sixth place finishes respectfully.

In the mens 50m backstroke Russell Wood added another backstroke win after touching in at 26.66 to take the gold. Club Wolverine’s George Bovell finish second in 26.97 just ahead of Newmarket’s Jeffrey Swanston who grabbed himself a third place finish with a 27.10 Geoff Cheah who won the 100m fly came fourth in 27.22.

The womens 400m freestyle might have just been one of the most anticipated races of the meet as Canadian freestyle star Brittany MacLean and America’s golden girl Missy Franklin faced off in the event for the first time since they raced the 500y freestyle at the NCAAs. At the NCAAs, MacLean came home with a win for the University of Georgia and did the same tonight absolutely dominating the race. MacLean swam a 4:10.77, just over four seconds slower than she was at trials a few weeks back. Missy touched in at 4:14.33. Amazingly, both swimmers negative split their races. Franklin is fairly new to this race, but we could see the two facing off in several events at Pan Pacs this summer assuming Franklin qualifies for the US team.

Keegan Zanatta took the mens 400m freestyle in 3:57.01 over Tristan Cote from Etobicoke who followed him to the wall touching in at 3:57.62. Peter Brothers rounded out the top three with a 4:03.30 followed by Jeremy Bagshaw in 4:04.17 and Teddy Kalp in 4:04.47. Stefan Milosevic who’s been swimming well grabbed the sixth spot in 4:05.47 just ahead of Cote’s teammate Aly Abdel-Khalik.

Caitlin Leverenz ran the show in the 200m IM tonight touching in at 2:13.79 over closest competitor Celina Li. Li touched in at 2:16.40 over two-and-a-half seconds behind Leverenz. Leverenz’ time was just shy of her current season best of 2:13.44 that she swam back at the Austin Grand Prix in January.

The mens 200m IM was won by up-and-comer Evan White. White is currently having the season of his life and added the win to his belt by touching the wall in 2:05.40 over teammate Mack Darragh. Darragh finished behind White in 2:06.09. White will be swimming for Michigan in his freshman year next year.

Victoria Poon won the womens splash-and-dash in an impressive 25.93. Michelle Williams from the North York Aquatic Club came second in 26.01 followed by Cal swimmers Farida Osman and Kaylin Bing. Sandrine Mainville who won the Sprinters Cup at this years CIS Championships for winning both the 50 and 100m freestyle finished back in seventh with a time of 26.50.

George Bovell let his experience take him away as he led Club Wolverine to a 1-2-3 finish in the mens 50m freestyle. Bovell truly created a gap between himself and the rest of the field touching the wall in 22.91 followed by his teammates Geoff Cheah and Zach Hayden. Hayden tied with Cascade Swim Club’s Yuri Kisil in 23.33.

Tera Van Beilen set herself up perfectly for tomorrow with a win in the 200m breaststroke tonight. Van Beilen swam a 2:28.41 to take the win ahead of Kierra Smith and Martha McCabe. Smith swam a 2:29.12 followed by McCabe’s 2:30.79. With that win, Van Beilen has now won the 100 and 200m breaststrokes and is currently heading into tomorrow’s finals session as the top qualifier in the 50m breast. So far Van Beilen has been unstoppable in the breaststroke and without Smith or McCabe in the A final tomorrow it’s her race to lose.

Richard Funk set himself up just as Tera Van Beilen did with a win in the 200m breaststroke tonight. Funk swam a 2:16.21 for the win, touching in over five seconds ahead of second place finisher Ashton Baumann. Funk hasn’t seen too many challengers come forth and really compete with him this meet in the breaststroke events, so he too has the opportunity for a sweep tomorrow night.

In the womens 800m freestyle relay the Canadian ‘A’ team was able to defeat the Cal team by over three seconds. The Canadians took the win in 8:08.00 followed by Cal in 8:11.84. In some sort of redemption from her loss tonight, Franklin posted the fastest 200m split of the night while anchoring the Cal team; Franklin swam a 1:56.56 just faster than MacLean’s split of 1:56.60.

In the mens relay the UBC Dolphins won by a landslide in 7:32.60 over second place Cascade Swim Club.

I highly doubt Missy and MAclean will face off at the pan pacs this summer. What event?? the 200? Missy will easily win. They won’t face off in any other events.

No need to make excuses for Missy (everyone else will do it for you). Why in the world would this not be an anticipated event?!?! After the NCAA’s this was absolutely so.etching to get excited about!!!! That was maybe the greatest 500 free ever!! They could be racing the 25 yard doggie paddle and it would be anticipated!! Missy LOST in a race at NCAA’s by a miraculous finish from some”non-Missy” swimmer – the shock!!! Everyone wanted Missy to get her vengeance here (well almost everyone). I promise you had Missy won (not that this race means much either way) it would have been the headline to this article.

Who is making excuses here?
I’m not the Missy’s lawyer or manager! 🙂

Simply because it can’t be a vengeance.
Missy Franklin isn’t a 400 free swimmer.
Do you think she swam that event all year in college with joy and smile? I don’t think so. She did it only to bring big points to her team.
She’s a 100/200 swimmer.
I don’t invent anything here.
She swims that event this week just for training.
It seems obvious to me.
Brittany MacLean… Read more »

The 400 free final one of the most anticipated races of the meet?
I didn’t know that.
Missy isn’t at all a 400 free swimmer. She swims that event just for training. It will help her finish in the 200 free.

Do all the big names of that meet swim in a racing suit? Or do some of them wear a training suit?

I just moved to Vancouver and went to watch the meet. From the stands it seems like most women were wearing racing suits and the men were a mix of briefs and jammers. Nobody really seemed rested though — definitely an in season meet.

Very interesting facility as well — a bit dated, but a very strange pool design with lots of angles.