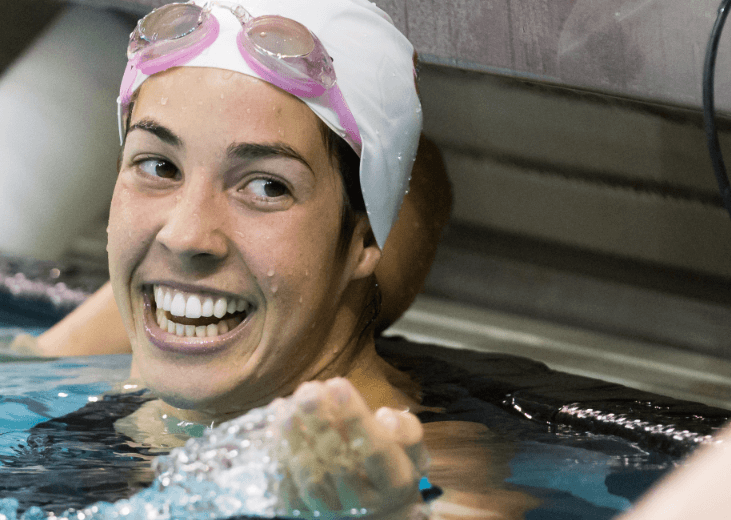 Maya DiRado is starting out her professional career on the right foot. The Stanford grad won two more races on night two of the Speedo Grand Challenge, picking up her second and third winners paychecks of the meet so far. Archive photo via Tim Binning/TheSwimPictures.com

Maya DiRado is starting out her professional career on the right foot. The Stanford grad won two more races on night two of the Speedo Grand Challenge, picking up her second and third winners paychecks of the meet so far.

Stanford pro Alex Coville kicked things off, winning the 50 free in a tight touchout of USC’s Cristian Quintero and Utah’s Nick Soedel. Coville went 23.04, just a hundredth faster than his prelims time, to top Quintero’s 23.07. Soedel was a narrow third in 23.08. Quintero’s USC teammate Santo Condorelli took fourth with a 23.45.

Aquazot put three 18-and-under swimmers into the final of the 400 IM, and Corey Okubo took the win for the local club. Okubo, who will swim for Princeton next year, went 4:18.90 to just beat out Stanford’s rising sophomore Max Williamson (4:19.06).

Okubo’s teammates Ken Takahashi and Alex Peterson were both a ways back at 4:31s to close out the heat.

Winner of the 200 IM last night, Stanford grad Maya DiRado picked up another win tonight in the longer IM distance. The multi-time NCAA Champ went 4:43.98 to blow away the field. Second was 17-year-old Kim Williams at 4:51.72. Club Trojan’s Haley Anderson went 4:55.22 for third, and Tara Halsted rounded out the A final at 4:57.98.

17-year-old Alex Valente rose from the second seed to win the men’s 100 fly. He went 53.43 to top Kenyan national Jason Dunford. Dunford, competing for Stanford, was 53.85 for second.

Kendyl Stewart got her first win of the weekend in the women’s race. The USC Trojan went 59.39, holding off a tough challenge from Stanford’s Felicia Lee (59.48). UCLA’s Katie Kinnear went 1:01.44 for third, and another Trojan, Jasmine Tosky, took fourth in 1:01.59.

Maya DiRado stayed hot, taking her second win of the night in the women’s 200 back. DiRado went 2:12.97 to pass up top-seeded Kendyl Stewart. Stewart still went a few tenths faster than her prelims time, though, to take second at 2:14.48.

The night’s final win went to USC’s Cristian Quintero in the 400 free. Just touched out in the 50 earlier, Quintero settled into the mid-distance race, more of his specialty, to win in 3:56.75. Quintero was well ahead of Stanford’s Tom Kremer, who finished second with a 3:59.06.

Novaquatics’ Caden Tran took his second breaststroke race in as many days to open the age group events. The 12-year-old went 1:18.98 for the win in the 100 after taking the 50 last night.

Following suit, girls 50 breast winner Lauren McCormack added the 100 title to her resume with a 1:18.66.

Kaitlyn Panopio took home her second win of the weekend, pacing the girls 50 back at 32.55. Riley Lexvold of the Barracudas was just behind in 32.67.

In the girls 50 fly, Crystal Murphy went 1:08.70 to win by about a half-second over Mission Viejo’s Mia Ristic.

You are correct, good catch – story has been updated!

DiRado has completed her NCAA eligibility, and there’s nothing in the NCAA rulebook that says you can’t go pro at that point so she might as well take any paychecks offered. You even get some NCAA ice hockey players who drop out midway through what’s supposed their final semester after their winter championships tournament is complete because the team that holds their NHL rights has offered them a spot on their expanded playoff roster.