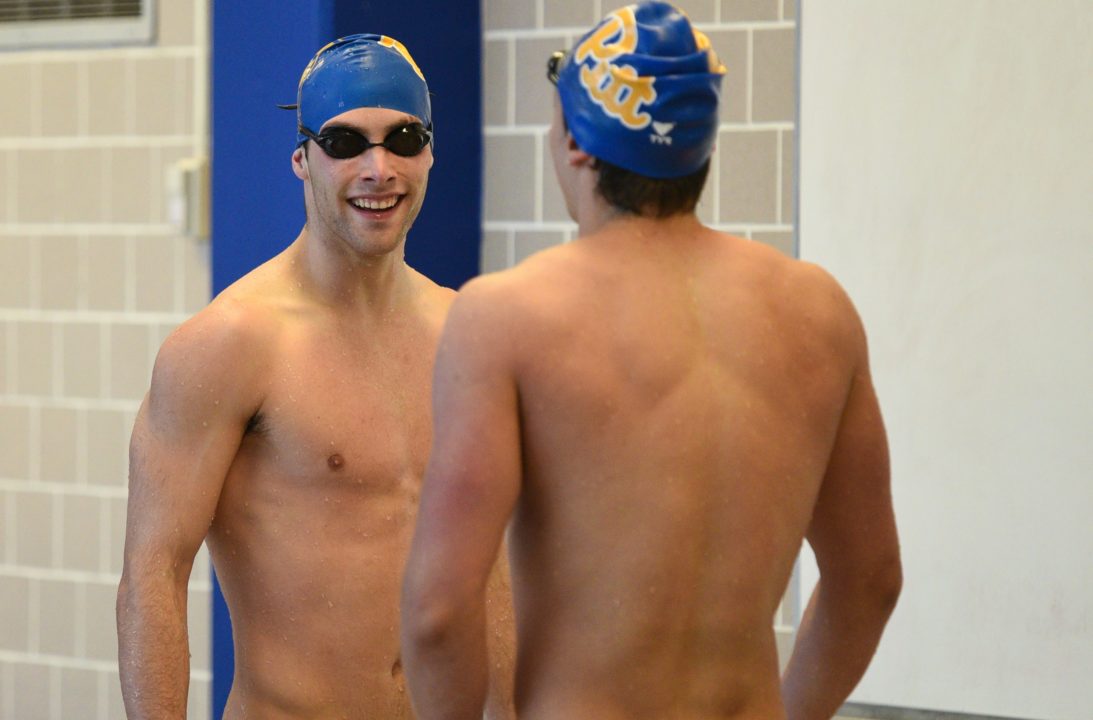 Senior Blaise Vera's season best 50 free was one of the event wins that led Pitt to decisive victories on their men's side by 123 points and women's by 87. Archive photo via Pitt Athletics

On Saturday, the University of Pittsburgh claimed victory against Army West Point on both the men’s and women’s side while celebrating their 7 graduating seniors at their home pool.

Note that about 47% of the 2020-2021 Army roster was absent at this meet. Army had 12 women and 15 men competing against 27 men and 27 women from Pitt. Among Army’s absences were senior Josh Zock who placed 2nd in the 50 free at last season’s  Patriot League Championships and sophomore Gillian Burch who led the women’s team in individual points at the same championships.

Next, Pitt will compete at the 2021 ACC Championships which are scheduled for Feb 17 for women and Feb 24 for men. At last year’s ACC Championships, Pitt men had their highest-ever team finish (8th place) and their women’s program placed 10th under head coach John Hargis.

Next up for the Army is a dual meet against the Navy on February 27th hosted at West Point. The Army women’s program is coming off a 4th place finish at the 2020 Patriot League Championships where the men’s program finished in 2nd place under head swim coach Brandt Nigro and head diving coach is Chris Waters.

Pitt won 12 out of 14 events on the men’s side, starting with the 200 medley relay where freshman Marcin Goraj, junior Cooper Van Der Laan, and seniors Blaise Vera and Ellis Cannon posted a time of 1:26.84. This was the fastest 200 medley relay time Pitt has clocked this season.

The Panthers’ ‘B’ relay touched the wall 1.5 seconds later in 2nd place. Junior Stephen Hopta swam the lead-off leg on that ‘B’ relay and posted a 22.54 split compared to Goraj’s 22.91, but the ‘A’ relay swam the fastest splits for the rest of the race.

Pitt senior Blaise Vera won the 50 free with a season-best time (19.46) that takes .34 off his previous best from earlier this month and launches him from #34 this season in the NCAA to #13. His lifetime best still stands at 19.10 from the 2019 Purdue Invite.

After the 50 free, Vera clocked another season-best time in the 100 fly (47.03). He had a close race with Army senior James Bilbrey, but he ultimately claimed 1st by about .3 and came closer to his all-time best time of 45.99 from the 2019 ACC Championships where he placed 8th. As Vera is ending his collegiate career at Pitt, he still holds school records in the 50 free, 100 free, and 100 fly.

Goraj and Hopta continued to duel during another backstroke race on Saturday: the 100 back. Goraj snagged 1st place with a time of 48.54, out touching Hopta by exactly .40 seconds. Hopta While this was about a .6 second add for Goraj, it was a lifetime best for Hopta by .14. His previous best was set at the Pitt vs West Virginia duel meet earlier in January.

In the 200 back, Goraj touched the wall 1st again (1:46.98), finishing the race over 3 seconds ahead of Army freshman Sam Wesley who touched the wall 2nd. Goraj came within 2 seconds of the lifetime best he posted at the West Virginia duel meet.

Sophomore Panther Dominic Toledo swam a lifetime best 200 free (1:38.95) to win the event, taking half a second off the time he posted at the 2020 ACC Championships. He was  followed closely by teammates Serhii Ahadzhanian (Jr.) and Army’s Sean Dwyer (So.) The three men touched the wall within .6 of each other.

Bilbrey secured a win for Army in the 200 IM, touching the wall 1st at 1:50.99 nearly a full second ahead of Wesley and about 3 seconds away from his lifetime best set at the 2020 Patriot League Championships. Army swept first through fifth place, and all Pitt swimmers swam the event as exhibition. In the exhibition lanes, Pitt freshman Javi Zorzano Jover clocked a 1:49.42.

Army ended the meet by winning the 200 free relay with an  ‘A’ relay of Graham Ungrady, William Rankin, Billy Webber, and James Pinter touched 1st at 1:23.48. Webber posted the fastest split on the 3rd leg (20.75). All 3 Pitt relays swam as exhibition, where Vera clocked the fastest (unofficial) split of 19.17

The Panther women won 10 out of the 14 events contested.

Army junior Lauren Carag played a role in 3 of Army’s wins on the women’s side. First, their 200 medley relay of Carag, sophomores Mandolin Nguyen and Angela Huang, and  senior Madison Berg claimed 1st at 1:42.06. They out touched Pitt by less than one-third of a second. Notably, Pitt’s breaststroker Kate Fuhrmann, a sophomore, dropped a 28.45 split which out swam the field by half a second. Freshman Panther Sophie Yendell also posted the fastest fly split in the event (24.01). But it was Carag breaking 26 (25.92) on the backstroke and Berg anchoring in 22.70 that separated the two teams.

Then, Carag had a tight race with Pitt senior Shahar Menahem in the 100 back, with Carag ultimately touching the wall 1st at 55.51, .13 ahead of Menahem. Carag’s lifetime best still stands at 53.87 from a relay at the 2019 CSCAA National Invitational.

Army ended the meet with a 1st place finish in the 200 free relay. Their relay of Berg, Huang, Carag, and Aurelie Migault touched 1st at 1:35.16 and the other 2 relays competing were Pitt relays swimming as exhibition. Huang posted the fastest split (23.19), topped only by Yendell (23.04), unofficially.

In the 100 breast, Fuhrmann pushed her Pitt freshman teamate Anneliese Hohm to a season best time of 1:03.50. Fuhrmann touched the wall 1st at 1:03.06, within .40 of her personal best time from last season’s ACC Champinships.

Furhmann secured another win for the Panthers in the 100 free, finishing the race with a time of 50.38 followed by Army’s Berg (50.98) who was the last to squeak under the 51 mark.

Pitt sophomore Daisy Anderson won the 200 fly with a 2.5 second lead over the field, touching the wall first at 1:59.57. Anderson already held the fastest time this season for the Panthers, and this improved that by .84 seconds. She is now about .6 off the school record. Anderson followed up that swim with a victory in the 200 back and a lifetime best time (2:00.24).

Yendell secured another win for the Panthers by touching the wall 1st in the 100 fly (55.08), coming close to her lifetime best (54.70) from the West Virginia dual meet earlier in January. Yendell also won the 50 free (23.11), shaving .24 off her lifetime best from the same dual meet.

Courtesy of the University of Pittsburgh:

PITTSBURGH – The University of Pittsburgh swimming and diving team swept its dual meet Saturday at Trees Pool, with No. 22 men winning 203.5-80.5 and the women claiming a 186-99 victory.

“I thought we raced well,” said Pitt head coach John Hargis. “Today was all about the seniors and we wanted to be able to send them off the best way that we could. Obviously with no fans and no parents it was a much different senior day than usual, but it was very nice to watch the videos from their families congratulating them on their success at Pitt. I think the team won and battled really for the seniors. We have a couple of weeks left here and we want to fine tune the kids, give them some rest and get ready for conference.”

The home meet was the last for seven Pitt seniors’ careers: Ellis Cannon, Judd Fishman, Kathleen Lynch, Shahar Menahem, Armin Remenyi, Ryan Schonbachler and Blaise Vera. A ceremony was held before the swimming events started, with taped videos from each senior’s family shown on the videoboard congratulating them.

Junior Amy Read claimed first-place in the 3-meter with a score of 318.90, and junior Serena Buchwald came in right behind at 309.45. Freshman Claire McDaniels earned a personal-best score of 298.43 for third place. Sophomore Meredith Gould (262.43) and freshman Claire Hartley (249.23) also registered personal-record scores.

Sophomore Dylan Reed had the top score in the 1-meter at 347.25. In the platform, junior Wesley Ahart took first with a personal-record of 301.43 for a NCAA Zone Diving C Cut.

Sophomore Dominic Toledo captured a personal-record for first place in the 200 Free at the best time by a Panther this season, 1:38.95.

*A press release has not been posted yet.

Hargis is building a Power House. Wouldn’t be surprised if he is the next Auburn Head Coach.

He ain’t leaving, he and his family are very invested in the community.