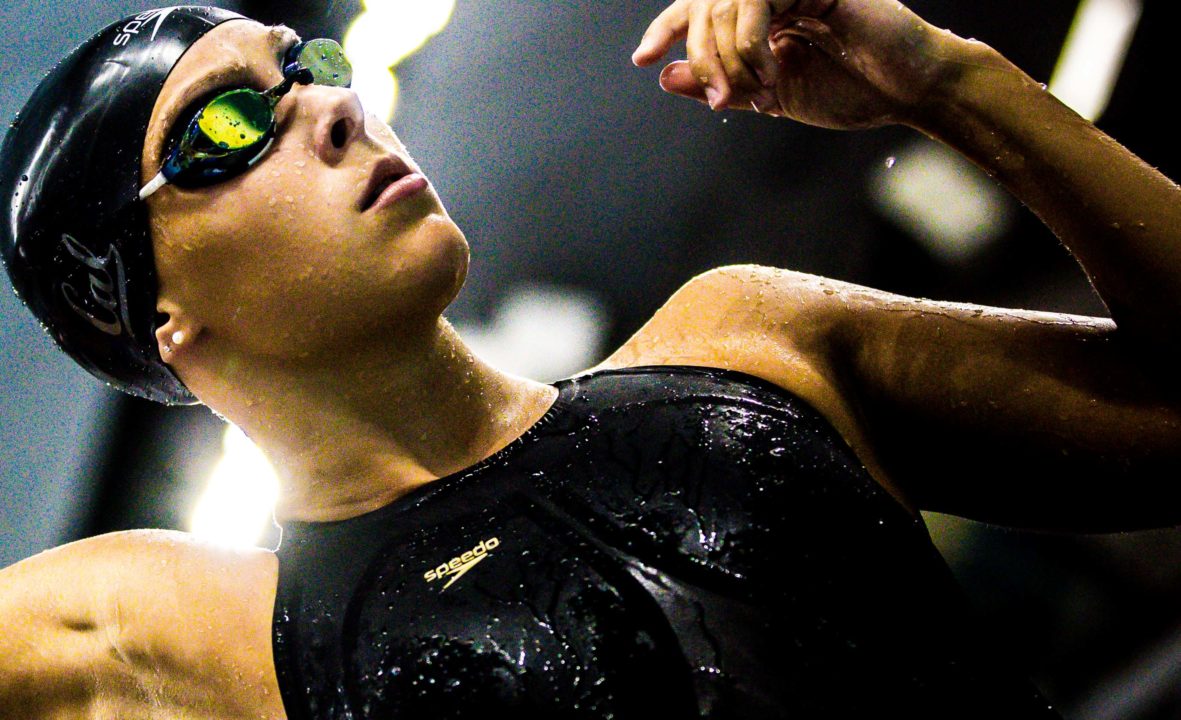 Cal's Izzy Ivey continues to shine as she took down Olympian Abbey Weitzeil's 100 free pool record with a personal best of 47.53, now #2 in the NCAA. Stock photo via Jack Spitser/Spitser Photography

Izzy Ivey kept the records going as she took down Abbey Weitzeil‘s 100 free pool record with a 47.53. That shaved two-tenths off her personal best of 47.75 from the 2019 NCAA Championships. Ivey’s Cal dual-meet record today now ranks 2nd in the NCAA this season, only behind UVA’s Kate Douglass (46.86).

Cal junior Alicia Wilson won the 200 IM in another Cal dual-meet and Spieker pool record time of 1:53.58, dropping a second off her lifetime best of 1:54.68. Yesterday, Ivey broke the pool record at 1:55.34. Today, she took second behind Wilson today at 1:55.08. Wilson’s time now ranks 2nd in the NCAA behind versatile UVA sophomore Douglass (1:50.92) while Ivey improved to 6th.

UCLA’s highest finish today came in the 100 breast, where junior Claire Grover finished second in a sub-minute performance of 59.91. Winning by a second was Cal’s Ema Rajic at 58.91. Yesterday, she broke her own Cal team record with a 58.79, which is 6th in the NCAA this season.

Earlier today, Cal freshman Isabelle Stadden swam a 1:52.46 to top the 200 back against USC. Hours later, Stadden improved to a 1:51.17 to top against UCLA. Stadden ranks 2nd in the NCAA with her lifetime best of 1:49.77 from last November. Teammate Wilson, who won the 200 IM, took second in this backstroke event at 1:53.96, improving to 15th in the NCAA this season.

Tomorrow’s session is set to begin at 9 am PT.

Izzy is on fire

The cal women have had a bit of a reversal the last few years I feel like. Back in the missy franklin days I feel like they were getting all the best recruits then a lot of them weren’t developing much or getting worse even. Lately they’ve gotten less big names (but still great recruits like Ivey and stadden just not all the big names like they used to) and they’ve been swimming really well compared to expectations.

Setting records and winning NCAA championships and making world championship squads and pb’s to boot and 15 years top 3 in the nation is hardly getting worse. Every recruit doesn’t pan out or make a good fit and life happens but CAL is an incredible program through and through and there is no way of disputing that. Teri Mckeever is one of the best coaches in swimming history— she has changed the sport—and it shows year after year. Check the receipts . . .

Man what a beast