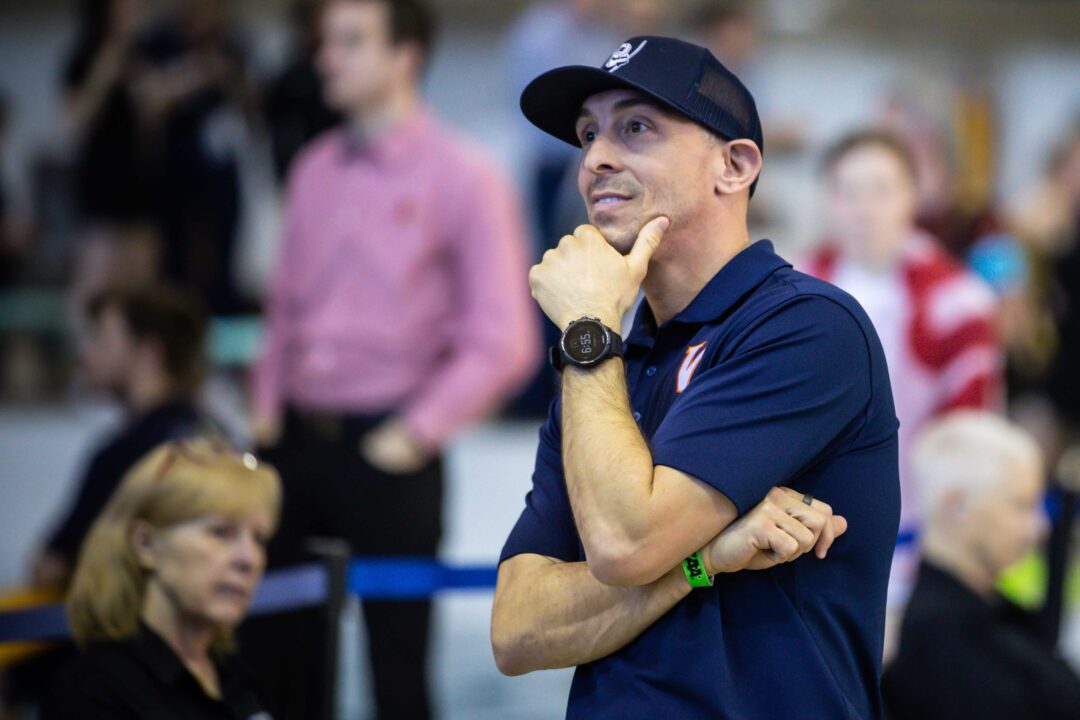 On September 8th, the ASCA will be announcing the winner of the 2022 George Haines Coach of the Year award from the six nominated coaches. Archive photo via Jack Spitser/Spitser Photography

The American Swimming Coaches Association (ASCA) announced the six finalists for the 2022 George Haines Coach of the Year award on Thursday.

The award recognizes these coaches for effectively preparing their swimmers to perform outstandingly at the World level. In an Olympic year, the ASCA only considers coaches who contributed gold medalist athletes.

Each of the finalists had at least one athlete who earned a gold medal at the recent 2022 World Championships in Budapest, Hungary.

DeSorbo is the head coach at the University of Virginia, where he trained medalists Alex Walsh and Kate Douglass. Walsh won three golds in the 200 IM and 400 medley and 800 free relays as a member. Douglass earned her first World Championship medals this summer with two bronzes in the 200 breast and 400 free relay.

Durden is the head coach of the men’s team at UC Berkeley, where he trained multiple gold medalist Ryan Murphy. He earned his first long course meters World Championship individual gold in the 200 back and took home another gold as a member of the 400 mixed medley relay as well as two silvers in the 100 back and 400 medley relay.

Norment is an assistant coach at Georgia Tech University where he trained gold medalist Nic Fink. He won two golds in the 50 breast and the mixed 400 medley relay. He also earned silver in the men’s 400 medley relay and bronze in the 100 breast.

Last year’s winner was former Florida head coach Gregg Troy, who prepared Caeleb Dressel for the Tokyo 2020 Olympics. Dressel’s five gold medals at the Games proved that Troy contributed the most to American Swimming Excellence at the World level. Troy’s 2021 title is his second after his 2010 honor, when his swimmer Ryan Lochte won six gold medals at the 2010 Mutual of Omaha Pan Pacific Swimming Championships.

One of the 2022 finalists will be announced as the winner on September 8th at the awards banquet held during the ASCA World Clinic at the Westgate Resort in Las Vegas.

You can visit the ASCA World Clinic’s website for more information.

I’m ok with Nesty. But Aitkin being left out is insane. College coaches get to recruit and manage talent. Club coaches have to develop it. Aitkin should win this going away!

Coach Ron Aitken needs to be in this list. College coaches get the swimmers ready and kerp developing them. Club coaches di the HARD job, developing them. Coach Aitken had 4 swimmers in the World’s roster, all of them FROM A CLUB.

How about Coach Lou? He was well on his way to Jersey Coach of year!! Let’s get the big guy his votes

Bit of a yikes oversight indeed.

Where is Teri? She deserves this.

There really should be a woman on the list imo, she got robbed.

How about a fresh name or two?

Michael Norment isn’t a ‘fresh name’ to you?

@Braden Keith: Michael Norment is a “fresh name” to me. I hope he wins the award.