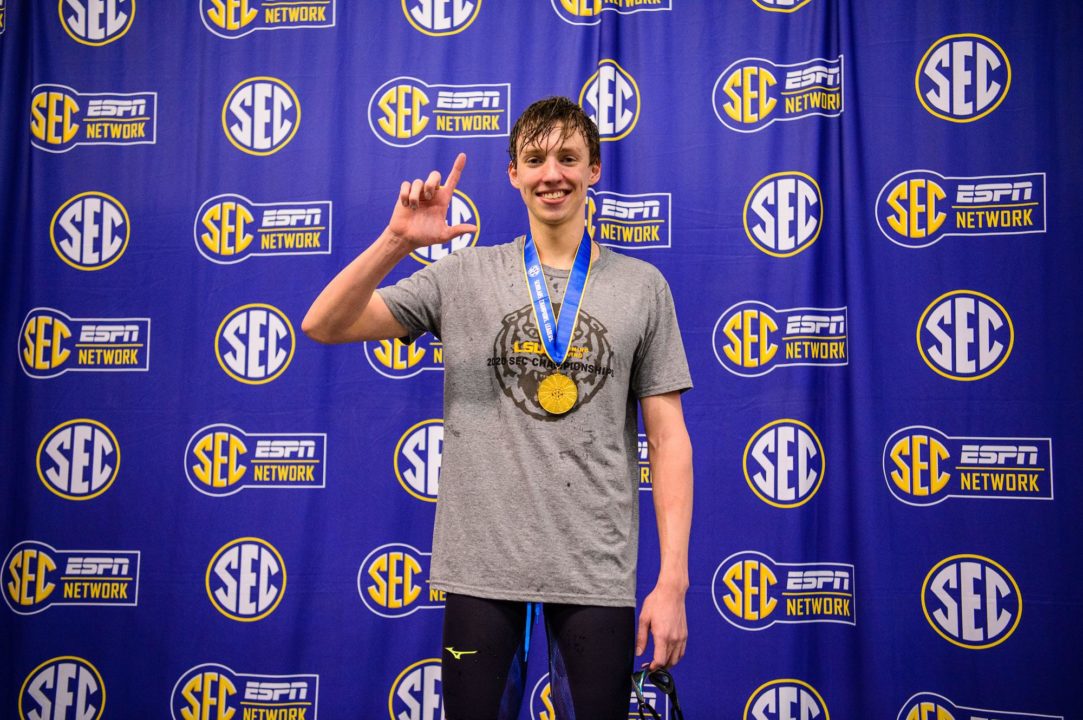 The University of Alabama swept LSU on the road as Brooks Curry returned to racing for the first time after his breakout SEC Championship meet last spring. Current photo via LSU Athletics

Adam Chaney had a historic week in Columbia, throwing down 20.7/44.9 backstroke and 18.7/42.2 freestyle for the winning gators

Racing in his first meet since his breakout SEC Championship meet in February, LSU sophomore Brooks Curry swam to two first-place finishes as LSU hosted the University of Alabama for a dual meet.

In Curry’s first individual race, the 200 free, he swam to a commanding first-place finish, leading the field by almost four seconds. Curry touched the wall in 1:35.86, only about three seconds off his lifetime best, a 1:32.43 from the 2020 SEC Championships. That time was good enough for second place at that meet, as well as the 8th fastest time in the nation last season. Second place went to Alabama’s Cam Auerbach, who finished in 1:39.65.

Curry’s other first-place finish came in the 100 free. Curry held off Alabama’s Liam Bell in the event, touching in 43.19. Bell took second in 43.70. Last year, as a freshman, Curry was the SEC champion in the 100 free, finishing first with a new best time of 41.81. He held the nation’s fourth-fastest time in the event last year.

His efforts weren’t enough, though, weren’t enough as Alabama rolled to a sweep of the victories. The Alabama men move to 32-11 all-time against LSU, while the Crimson Tide women now have a 23-15-1 all-time record in the series. In spite of their huge football rivalry, prior to this meeting, the teams hadn’t raced since the 2016-2017 season.

For Alabama, one of their top performances on the men’s side came from sophomore Matthew Menke. Menke, who was an SEC Championships A-finalist in both backstroke events, took first in both against LSU. He posted a 48.48 in the 100 back and a 1:47.47 in the 200 back, leading his team to a 1-2 finish in both races. He also added a second-place finish in the 200 IM as part of the Crimson Tide’s 1-2-3 finish.

LSU’s top women’s performance came on the diving board, as freshman Montserrat Lavenant swept the diving events. Lavenant led a 1-2-3 finish on the 1-meter with a score of 324.60, as well as adding another first-place finish on the 3-meter (334.65)

BATON ROUGE – The LSU Swimming and Diving Team welcomed Alabama to the Natatorium on Friday to kickoff the 2020-2021 season. The Tigers won nine events, but ultimately came up short against the Crimson Tide. The men lost by a final score of 194-84 and the women fell 183-117.

Juan Celaya-Hernandez and Montserrat Gutierrez Lavenant both swept the springboard events for the Tigers against Alabama.

BATON ROUGE, La. – The Alabama swimming and diving team opened the 2020-21 season on the road Friday by dominating the LSU Tigers in Baton Rouge. The Crimson Tide men beat the Tigers 194-104, while the Alabama women came out on top 183-117.

Rhyan White and Kensey McMahon led the way for the women’s team, winning three events apiece. White dominated the 100 and 200 backstrokes, while also coming away with a win in the 100 butterfly. McMahon swam away from the field in the 500 and 1,000 freestyles and took first in the 200 butterfly as well.

The Tide had a trio of swimmers – Derek Maas Matt Menke and Nicholas Perera – tally two individual wins each to lead men. Maas won the 100 and 200 breaststrokes, Menke took top honors in the 100 and 200 backstrokes, while Perera won the 200 butterfly and 200 individual medley.

“We wanted to come in here and find out where we are as a team in what has definitely been a different start to the year, and we did that. I think having our first meet of the season on the road was a good experience for our rookies and it certainly gave us a chance to bond as a team. We had some really good swims today and there are some areas that we still need to work on. We’ll enjoy this win, but we’re also focused on getting back to practice and continuing to get better week-by-week.”