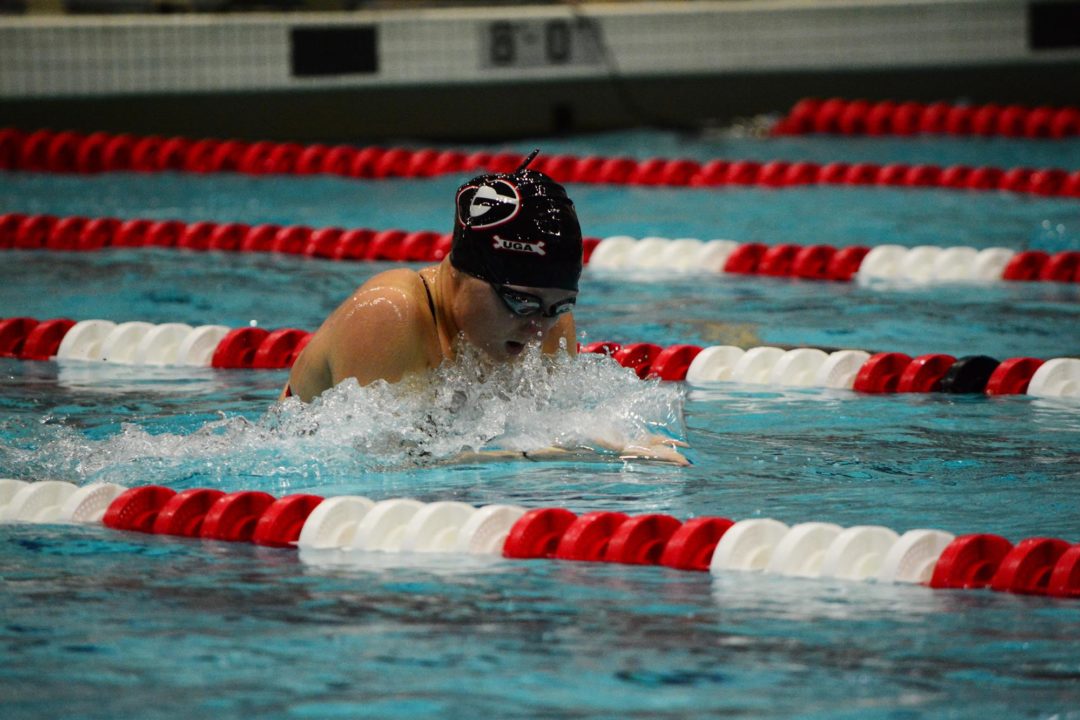 Georgia senior Danielle Della Torre is the top-ranked 200 breaststroker in the NCAA this season after the Bulldogs' dual meet against Auburn. Archive photo via Georgia Athletics

The Georgia Bulldogs swept the Auburn Tigers at home on Friday, with the men’s and women’s meets being swum in separate sessions.

In the process, she beat her teammate Zoie Hartman, last year’s SEC Champion in that event. Hartman finished 2nd on Friday in 2:12.33.

Della Torre also picked up a win in the 200 IM on Friday, swimming 2:00.56 to finish a second-and-a-half ahead of the field.

For Auburn, the star performer was sophomore AJ Kutsch. The Alabama native, who was a member of the SEC All-Freshman Team last season, finished 7th at the SEC Championships in the 50 free last year.

In her 2020-2021 intercollegiate debut on Friday, Kutsch won the 50 free in 22.80 and in her best swim of the day anchored Auburn’s medley relay to a 1:39.93 win by splitting 21.89 on the freestyle leg. Auburn was half-a-second behind at the finish of the butterfly leg, but Kutsch ran down National Team member and the nation’s top freshman sprinter this season Maxime Parker (22.54) to grab the opening win for the Tigers.

Her season-best of 22.09 was a 7-tenths of a second improvement from her best coming out of high school.

After that Auburn win, the Tigers went 1-2 in the 1000 free but Georgia ran off wins in the next 4 races before Kutsch broke the streak in the 50 free.

The Georgia touched first all but 2 events in their session, though exhibition designation in the last two events of the meet artificially shrunk the margin.

Javier Acevedo, a redshirt season who sat out last season to prepare for the Olympic Games that never came, showed how much value he brings to a Georgia team that frequently struggles with sprinters.

That led a backstroke sweep for Georgia, with Ian Grum winning the 200 back in 1:44.55. That time ranks the sophomore 5th in the country this season.

Another addition for the 2020-2021 season is freshman Jake Magahey, who swam 1:35.76 to win the men’s 200 free. That time ranks him 4th in the country this season, behind a trio of Texas Longhorns. Of the top 4 swimmers in the country so far in this event, 3 are freshmen. None of the top 10 are seniors.

Freshman Luca Urlando, the #2-ranked recruit in the country in the class of 2020, won the 200 fly in 1:45.05. That’s exactly a second slower than he was in his debut last week against Georgia.

The lone Auburn male swimmer to earn a win on Friday was Reid Mikuta, who topped the men’s 100 breaststroke in 55.17.

ATHENS, Ga. – With multiple top national times, the University of Georgia swimming and diving team remained unbeaten with a sweep of the Auburn Tigers Friday afternoon at Gabrielsen Natatorium.

The No. 4 Georgia women topped No. 19 Auburn, 173-125, in the early session, followed by a 177-118 victory for the eighth-ranked men over the 22nd-ranked Tigers. Overall, the Bulldogs earned 23 wins during the afternoon meet.

In the women’s meet, junior Callie Dickinson turned in a career day with three race victories. For the second consecutive week, she took the 200 backstroke (1:58.81) and 100 butterfly (53.99), posting the sixth-fastest time nationally this season in the 200. She also added her first win of the season in the 200 butterfly, notching a B-cut time of 1:58.00, ranking her fifth nationally.

Senior Courtney Harnish was victorious in the 200 and 500 freestyle for the second-straight meet, posting times of 1:47.57 and 4:48.66 respectively. Fellow senior Danielle Della Torre also turned in a double dip, winning the 200 breaststroke with a national-best time of 2:10.91, as well as the 200 IM with a time of 2:00.56. Della Torre and sophomore Zoie Hartman remained a dominant 1-2 force in the breaststroke events, with Hartman winning the 100 with a B-cut time of 1:00.53.

Senior Gabi Fa’amausili earned a win in the 100 backstroke with a time of 55.48, while freshman Maxine Parker took the 100 freestyle for the third-consecutive week, posting a time of 50.14. In the closing 400 freestyle relay, the A team of Parker, Fa’amausili, Hartman, and Harnish swam as exhibition competitors, posting the event’s fastest time at 3:19.93, the second-fastest mark nationally.

At the diving well, freshman Meghan Wenzel grabbed her first collegiate win in the 1-meter competition, narrowly edging out junior Ellie Crump (265.65) with a Zone-qualifiyng mark of 268.28. Earlier, on the 3-meter, Wenzel took second with a Zone cut of 294.38, followed by Crump in third at 269.48.

The men’s meet proved to be a showcase for the Bulldogs’ outstanding depth. Following an opening 200 medley victory, senior Greg Reed opened the individual events with a winning time of 9:00.49 in the 1,000 freestyle. Reed later added a victory in the 500 freestyle, notching a B-cut of 4:22.52, the fourth-fastest time nationally. Freshman Jake Magahey continued the outstanding start to his career with a B-cut of 1:35.76 in the 200 freestyle, the second-fastest time in the nation this season and the top mark in a four-way Bulldog sweep.

In the butterfly events, senior Camden Murphy and freshman Luca Urlando continued to dominate, with Urlando taking the 200 at 1:45.05 and Murphy winning the 100 at 47.09. Additionally, senior Jack Dalmolin took first in the 200 breaststroke with a time of 1:59.23. While not victorious on the afternoon, junior Andrew Abruzzo performed solidly, finishing second in the 500 and 1,000 freestyle, along with a third-place B-cut in the 200 fly.

At the well, senior Zach Allen earned his third-consecutive win on the 1-meter, posting a Zones cut of 348.15. On the 3-meter, he nearly notched a season-best mark, placing second with a Zones-qualifying score of 345.15.

Georgia remains home for the modified Georgia Invitational, running Wednesday, Nov. 18 through Friday, Nov. 20 at Gabrielsen Natatorium. The Bulldogs will welcome ACC competitors Florida State and Georgia Tech for the three-day event. Live coverage will be available on SEC Network+.

ATHENS, Ga. – The Auburn swimming and diving team returned to the pool Friday for its first competitive meet in eight months. The men and women were both defeated by Georgia, but the Tigers were happy to be back and to have the opportunity to compete.

“First and foremost, I’m really appreciative of our medical team and support staff for giving us the opportunity to come over to Athens and compete,” head coach Gary Taylor said. “It was great to get both teams back in action. It’s been a long time. Most haven’t competed since February, and we haven’t had a dual meet since last January. So it was nice to get up and running again, which gives you an opportunity to compete and learn and grow.”

The Tigers started the meet strong with a victory in the 200 medley relay from Valerie Tarazi, Carly Cummings, Abigail Gibbons and AJ Kutsch, followed by a 1-2 finish from Emily Hetzer and Averee Preble in the 1,000 freestyle. Both Hetzer and Preble finished under the 10:00 mark.

Kutsch later earned another victory in the 50 free, finishing in 22.80 seconds.

As the meet went on, some of the Auburn freshmen made an impact in what was their collegiate debuts. Gibbons finished third in the 50 freestyle and 100 butterfly. Meghan Lee placed second in the 200 backstroke. Hannah Ownbey finished second in the 200 IM. Brynn Curtis placed fourth in the 100 and 200 breaststroke.

“I think you saw a lot of our younger athletes in the freshmen and sophomore classes really step up and perform and swim tough,” Taylor said. “They swam hard today for our women’s side, and we got some good wins and some good performances.”

On the men’s side, it was a 177-118 score in favor of No. 8 Georgia. However, similar to the women, the 22nd-ranked Tigers had a number of underclassmen step up Friday.

Freshman Reid Mikuta earned the team’s first victory, swimming a 55.17 to take first in the 100 breaststroke. Mikuta later placed second in the 200 breaststroke. He also swam the breaststroke leg on the men’s 200 medley team, which finished second to start the meet.

Auburn had a strong showing in the 50 freestyle where sophomores Nik Eberly and Cole Bruns finished second (20.56) and third (20.67) with junior Matthew Yish taking fourth place (20.71). Eberly also scored points with a third-place finish in the 100 butterfly.

Sophomore Lleyton Smith, who qualified for NCAAs a year ago, scored points in both the 100 and 200 backstroke, finishing second and third respectively.

It was a breakthrough performance for sophomore Ashlynn Sullivan who scored a career-high 311.85 points to take first in the 3-meter competition, her first victory at Auburn. She also finished third on 1-meter with 251.40 points to score a total of 12 points for the women.

On the men’s side, junior Conner Pruitt picked up where he left off last year with a win on 3-meter, scoring 395.25 points. The CSCAA All-American narrowly missed a sweep as he took second in the 1-meter event with 342.98 points. Sophomore Skip Donald and freshman David Vargas both placed third for Auburn – Donald on 1-meter (333.68 points) and Vargas on 3-meter (339.53 points).

“It was a pretty good day for us,” head diving coach Jeff Shaffer said. “We had eight divers, five of them hit zone qualifying scores in at least one event, so that was positive. Obviously, Ashlynn’s win on 3-meter was solid to get us going and get the women going. Conner had a solid score on 3-meter and was six points out of first on 1-meter. A lot of work to do yet but overall pleased with today’s performance.”

The Tigers will welcome Florida and South Carolina to the James E. Martin Aquatics Center for the Auburn Fall Invitational later this month. The three-day event, which includes swimming and diving, will begin on Wednesday, Nov. 18.

Congratulations to the Dawgs