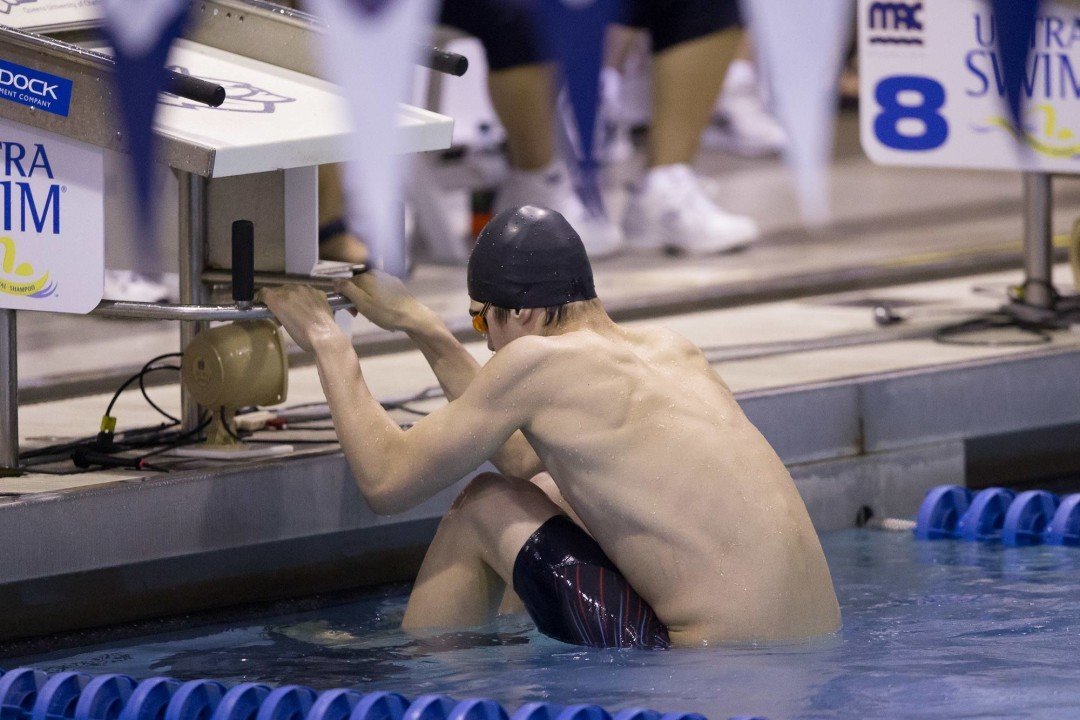 Michael Andrew blasted a sub-22 50 backstroke on the final evening of the 2015 Oklahoma City Pro-Am. Current photo via Tim Binning/TheSwimPictures.com

Sarah Allegri of the Kansas City Swim Academy took the title in the 200 back, finishing first in 2:03.49, falling a couple seconds short of her personal best of 2:01.46 from March. Twin sisters Martina and Luciana Thomas duked it out for the minor medals, touching just behind Allegri in 2:03.69 and 2:04.50.

100 Backstroke runner up James Wells, a former college star at Indiana, took the win in the men’s event, touching in 1:42.89 over Paul Le‘s 1:43.41. This marks the ninth time Wells has been under 1:43 in the event. Nick Carter of the Gulliver Swim Club placed third in 1:45.69 to clock in at his second fastest lifetime swim.

SwimMAC’s Madison Kennedy dominated the 100 free, winning the event by about three and a half seconds. Kennedy’s 47.87 took gold ahead of Martina Thomas, who managed the silver in 51.29 after a tough 200 back/100 free double. Kennedy threw down her first time under the 48 second mark, shaving over three tenths off her former best of 48.18 from 2009. Fifteen-year-old Natalie Jones touched third in 51.86.

The men’s 100 was claimed by Miguel Ortiz, who represents Spain internationally. Ortiz’s 42.57 narrowly touched ahead of runner-up Josh Schneider. Both Ortiz and Schneider were mere tenths from their lifetime bests. Former Minnesota star Derek Toomey snagged third for the Badger Swim Club, touching in 43.20. Toomey finished well off of his best time of 42.42 from last year’s Big Ten Championships.

Sixteen-year-old Taylor Pike of the Razorback Swim Club took the 200 fly handily after winning the 100 yard distance on Friday. Pike won the event by over five full seconds, touching in 1:56.53 to establish herself as the only swimmer to crack the 2:00 barrier. Pike achieved a best time by nearly a half second and now ranks as the sixth fastest 15-16 year old American this year. Luciana Thomas followed up her bronze in the 200 back with a second place finish, touching in 2:01.59.

Breaststroke ace Mike Alexandrov managed to crank out a 200 fly faster than his lifetime best in the men’s event by nearly a second and a half, touching for the win in 1:50.31. Fifteen-year-old Brogan Davis finished hot on his heels in 1:50.91, well ahead of Razorback’s Jared Crosby (1:53.32).

Cailey Grunhard picked up another victory for the Kansas City Swim Academy, winning the 50 back in 25.82. Grunhard led Martina Thomas (26.58) into the wall. By the end of the final individual race, Thomas managed to secure top three finishes in three of the four individual events contested tonight. Allegri followed up her 200 back victory with a third place finish, touching in 26.88.

Miguel Ortiz clinched his second win of the night, nearly breaking 21 in the men’s event. Ortiz’s 21.09 touched ahead of age group star Michael Andrew‘s 21.60. Although National Age Group records for 50’s of stroke are not documented for his age group, it’s hard to imagine that many people, if anybody, has ever swum that fast before turning seventeen. James Wells followed up his 200 backstroke victory with a third place finish in the sprint distance, finishing in 21.88.

What results are available for the mile swam on Sunday??

BFUNK- there is no way that happened. And I believe Thomas Anderson was 21.5 at 16

I didn’t believe it either but USA swimming has it listed. Check deckpass and see for yourself.

There seems to be an error in the USA Swimming database. That 20.36 was Seliskar’s leadoff time in the 200 free relay from the meet in question: http://www.pvswim.org/1314hs/2014Va5AState_m.html.