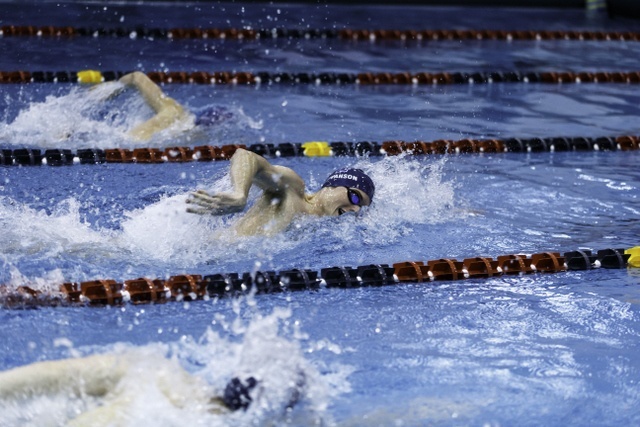 Penn's Chris Swanson crushed the 500 freestyle as the Quakers completed their third and fourth dual meet wins of the weekend. Archive photo via Tom Weishaar

The University of Pennsylvania secured a perfect four-for-four dual meet sweep this weekend, taking on West Chester Friday night and then hosting La Salle at the Quakers’ senior night on Saturday. They defeated the Explorers 165-123 on the men’s side while the women won 160-129. Instead of 100s and 200s, the Quakers and Explorers contested 50s and 100s of every stroke, including the 100 IM.

The Penn women began their meet with an explosive 400 medley relay, erasing the 12-year-old Sheerr pool record by nearly four seconds. In fact, both the Penn A and B relays clocked in under the former mark. The team of Libby Jardeleza, Lia Lombardi, Rochelle Dong, and Virginia Burns hit the wall in 3:52.51 over the B relay’s 3:54.12. The former record was held by Brown, who swam a 3:56.30 in 2004. La Salle’s top relay placed third in 3:59.85.

Annie McCotter led a Penn podium sweep in the 1000 free, taking the event in 10:22.07 over her teammate Ellie Grimes (10:30.21) while Madeleine Jardeleza touched third. La Salle’s Hayley Miles finished in fourth for the explorers. The shorter distance freestyle was claimed by a La Salle competitor, with Emma Smith touching in 5:03.39 over Penn’s Morgan Scott. Meaghan Kwarcinski rounded out the podium for the Quakers.

Libby Jardeleza touched first in a very close 50 backstroke race ahead of La Salle’s Olivia Distefano. Jardeleza’s 27.42 managed to edge out Distefano’s 27.63, while Penn’s Georgia Reilly claimed third in 28.40. La Salle retaliated in the 50 breast with a win through Kelsey Jenkinson (31.64) who fended off the Quaker duo of Catherine Yee (31.76) and Marissa Moskalow (31.81) for the victory.

After a lifetime best in the 1000 yesterday, Morgan Scott earned a victory today in the 200 free, winning in 1:53.68. Scott finished nearly a second and a half ahead of runner-up Madison Visco (1:55.14), who led Emma Siewert (1:56.52) to the wall. Kate Hay of La Salle touched fourth in 1:58.02. The 100 fly went to Annie Tran, who touched narrowly ahead of Carter Orth for the win. Tran and Orth both cracked a minute, throwing down respective times of 58.28 and 58.40. Penn’s Madi Dirks rounded out another Quaker podium sweep while La Salle’s Julia Mann touched fourth.

Penn’s Kimberly Phan took down Rochelle Dong to win the 50 free. Dong, the returning Ivy League runner-up, had not lost this event in dual meet competition since the Quakers faced off against Delaware in January 2015. Phan and Dong finished in 24.35 and 24.52 over fellow Quaker Mary Whiting, who took bronze in 24.71. Distefano touched the wall fourth for the Explorers. Penn’s Meagan Dollard used her opening speed to her advantage in the 100 free, splitting 25 mid at the 50 mark to take down La Salle’s Hay and her teammate Tran. Dollard touched in 53.37 to Hay’s 53.84 and Tran’s 53.96.

Distefano redeemed her loss in the 50 back by taking the 100 distance in a clear victory over Penn’s Ryan Alexander. Distefano (58.18) was the only competitor to break a minute, as Alexander touched in exactly 1:00.00. Madeleine Jardeleza claimed the third place slot. In the 100 breast, Nancy Hu threw down a 35-second back half to win over the La Salle pair of Kelsey Jenkinson and Maddy Koelsch. Both Hu (1:07.73) and Jenkinson (1:08.58) broke the 1:10 barrier.

Penn saw another podium sweep in the 50 fly, with Virginia Burns‘s 26.58 leading Orth and Laine Higgins. However, due to exhibition swims, La Salle’s Julia Mann claimed the official win in 28.60. Nancy Hu then broke a minute in the 100 IM to fend off Dong and Whiting, grabbing the victory in 59.56. Smith touched fourth for the Explorers in 1:01.32.

The final swimming event of the meet saw a Penn win in the 200 free relay, with Sydney Tan, Burns, Higgins, and Libby Jardeleza touching in 1:39.83. The Explorers hit the wall just behind Penn’s B team in 1:42.69. Notably, Penn’s C relay, consisting entirely of the Quakers’ divers, broke two minutes, with Maggie Heller anchoring in 27 flat to bring the team in at 1:59.28. Heller finished top three in both diving events, ceding the one-meter event to Penn’s Sophia Heiser (247.72) and the three-meter event to teammate Sivan Mills (258.67) and Heiser (255.68).

Just like the women, the Penn men kicked off their meet with a pool record, taking down Princeton’s 2012 mark in the 400 medley relay by two seconds to win the event in 3:19.83. Aided by a 43.78 split from Eric Schultz, the Quakers touched three seconds ahead of their B team while La Salle’s A relay claimed the bronze.

Alex Peterson ran away from the field in the 1000, taking down his teammate Mark Andrew 9:22.83 to 9:30.12. La Salle’s Mattias Glenesk claimed bronze. Chris Swanson utterly dominated the 500 free for the Quakers, winning by over 13 seconds ahead of teammate Bradley Wachenfeld. Swanson’s 4:27.32 sits less than a second off of the 36-year-old pool record and marks the defending Ivy League champion’s lifetime best dual meet swim by over two seconds.

Kevin Su won the 200 freestyle for Penn, lowering his lifetime dual meet best to 1:38.55. Only Su cracked the 100 second mark, with Schultz and La Salle’s Jakub Bartosiewicz following in 1:42.12 and 1:43.60. Jimmy Jameson and CJ Schaffer then went head-to-head in the 50 back with Jameson nabbing Schaffer by eight hundredths of a second. Jameson’s 23.56 and Schaffer’s 23.64 held off La Salle’s Fabian Bergman, who finished third in 24.23.

Fabian Bergman led the 100 back from start to finish, landing La Salle a win over Schultz. Bergman touched in 50.60 to Schultz’s 51.65 while Brian Foley edged out Mark Andrew for the third place finish. Jameson claimed his second victory of the night against Bartosiewicz in the 50 fly, with the Penn junior touching first in 22.82. Jameson’s teammate Zach Fisher completed the top three. Michael Wen won the 100 IM in 52.58 over Schaffer’s 53.27, while La Salle’s Dimitry Mladenovic took fourth in 55.59.

Despite swimming it as an exhibition race, the Quakers touched first and second in the 200 free relay, with the team of Fisher, Schultz, Su, and Sillinger clocking in at 1:22.09. La Salle hit the wall third in 1:27.72.