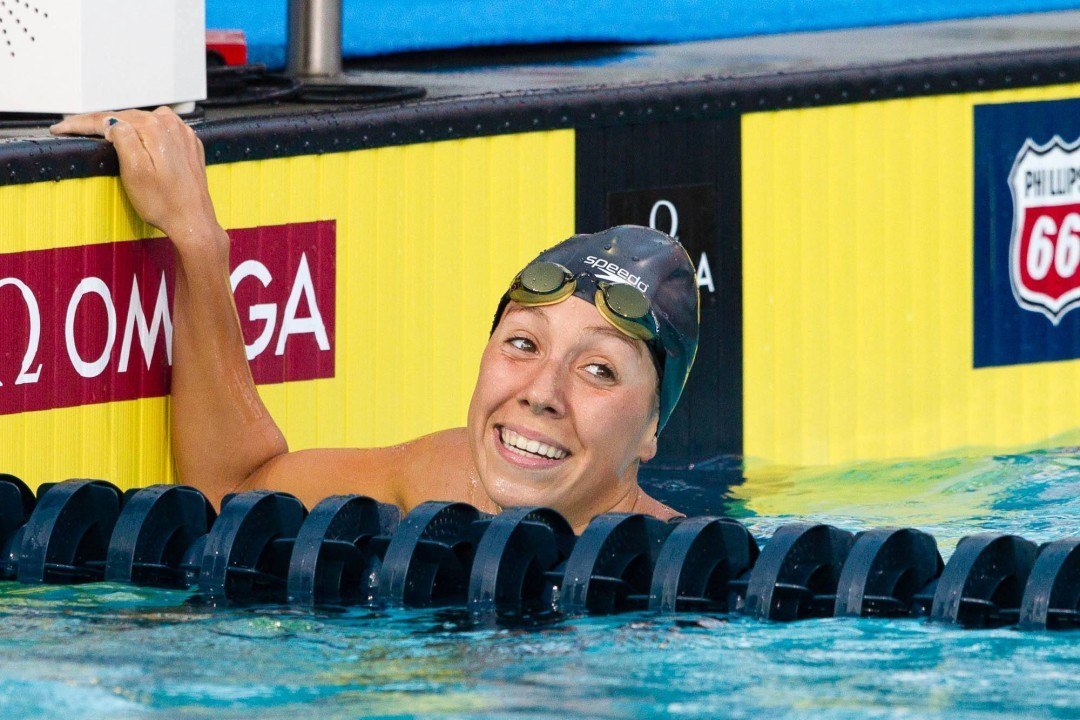 Danielle Galyer won both backstrokes as well as the 200 IM for the Wildcats on Friday. Archive photo via Tim Binning/TheSwimPictures.com

The Ohio State Buckeyes hosted the Kentucky Wildcats on Friday, garnering two dual meet wins in the process. The Buckeyes defeated the Wildcats 203-97 on the men’s side and 193-107 on the women’s side.

The Buckeyes kicked off the meet with a one-two finish in the 200 medley relay. The team of Carney Rabold, Rachael Dzierzak, Liz Li, and Annie Jongekrijg raced home nearly two and a half seconds faster than their B team, clocking in at 1:40.11. Kentucky’s A team finished third in 1:42.61.

Lindsey Clary and Alex Wittman followed up the relay with a second consecutive one-two punch for Ohio State, both breaking a minute in the 1000 free. The pair touched in 9:155.16 and 9:59.86 over Kentucky’s Kathryn Painter. Katy Luchansky followed their performance up with a victory in the 200 free, using her early speed to secure the win in 1:49.41. Kentucky’s Geena Freriks followed closely the whole race, touching just back in 1:49.90.

In a meet that featured predominantly Ohio State victories, Danielle Galyer was a standout for the Wildcats, winning both the 100 and 200 backstroke as well as the 200 IM. Galyer flipped third at the halfway mark in the 100 back, but threw down two back-to-back 27 second splits to take the win in 54.56. Behind her, Ohio State’s Liz Li and Kentucky’s Bridgette Alexander followed closely in 54.80 and 55.31.

Galyer swam a much more dominant race in the 200 back, where her 1:56.35 granted her a two and a half second margin over Ohio State runner-up Zulal Zeren. The fourth-place finisher at last year’s NCAA championships has already been as fast as 1:51 this year but her performance today marks her fastest dual meet swim since the Wildcats’ first meet against Arkansas. Galyer took home a third victory in the 200 IM, passing Ohio State’s Christi DiPaolo on the freestyle leg to win by a single hundredth. The duo touched in 2:03.60 and 2:03.61.

Vargo won an event herself, touching first in the 100 breast over Dzierzak, 1:02.30 to 1:03.70. Kentucky’s Kendra Crew was the fastest Wildcat in the event, finishing fourth. Ohio State swept the podium yet again in the 50 free, with Macie McNichols (23.03), Jongekrijg (23.13) and Maria Coy (23.52) securing the top three spots. Kentucky’s best finisher, Bridgette Alexander, touched sixth in 24.23.

Jongekrijg earned redemption in the 100 free, beating out Dzierzak and Luchansky to touch first in 50.83. Haley McInerny touched fourth for Kentucky. Meg Bailey took down McInerny by .04 seconds in the 100 fly, finishing in 55.39 to McInerny’s 55.43. After touching second in the 200 free, Geena Freriks earned Kentucky a win in the 500 (4:53.93), taking down Ohio State’s Cara Norris by three tenths.

The relay of Maria Coy, Chantel Wynn, Emily Albrecht, and Kathleen Cook won the final individual event for the Buckeyes, clocking in at 3:27.97 to take the 400 free relay. Kentucky touched second in 3:33.78. Hannah Thek won both the platform and three-meter diving events for Ohio State.

Right from the start, Ohio State made a statement, winning the 200 medley relay by nearly two seconds. The team of Matt McHugh, DJ McDonald, Ching Lim, and Mossimo Chavez raced home in 1:28.32 to take down Kentucky’s A team (1:30.09).

The relay was followed up by one of the most eventful races of the meet, when distance titans Drew Aviotti of Kentucky and Brayden Seal of Ohio State went head to head in the 1000 free. Seal held a narrow lead all the way through to the last 50, when Aviotti threw down an unprecedented 24.05 split to take the win by a hundredth of a second. Aviotti’s time of 9:11.03 not only earned Kentucky a win, but also broke the former Ohio State pool record by over three seconds.

Kentucky kept things rolling with Scott Crosthwaite, who won the 200 free in 1:39.19. Crosthwaite beat out his teammate Isaac Jones and Ohio State’s Steffen Hillmer, who touched dead even for second in 1:39.68.

Matt McHugh earned two individual wins for the Buckeyes, touching first in the 100 back and 100 free. McHugh won the 100 back comfortably in 47.11, nearly two and a half seconds ahead of his teammate Mark Belanger. Kentucky’s Walker Thaning touched in 49.53 for the bronze. The 100 free featured another tie for second place, with Kentucky’s Sean Gunn and Ohio State’s Nathan Christian touching in 45.29 behind McHugh’s 44.63.

Christian earned himself another second place in the 50 free, where Kentucky’s Cobe Garcia busted out a sub-ten second first 25 and held his momentum to win in 20.21. Christian finished a half second back in 20.76, narrowly ahead of Chavez’s 20.79. Ohio State freshman Gus Whiteman gained the Buckeyes a win in the 200 back, touching in 1:47.72 over teammate Andrew Appleby (1:48.30). Thaning rounded out the podium in 1:48.46.