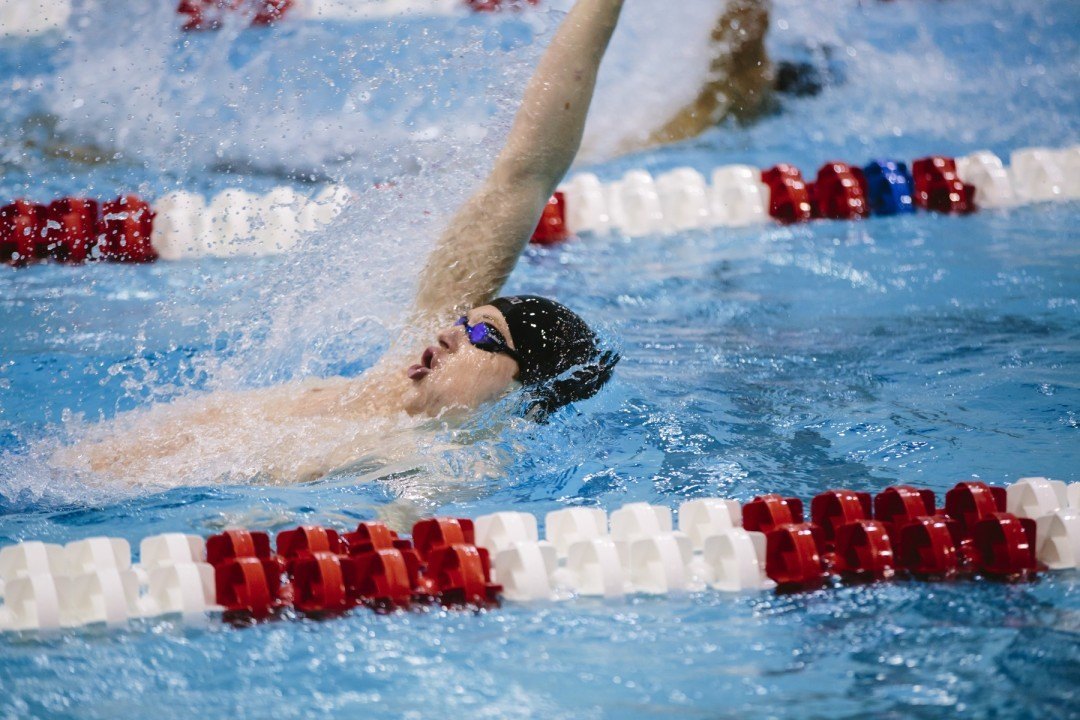 Both the Cornell Big Red and the Brown Bears walked away with a new victory after both teams’ final meet before they compete at the Ivy League championships. The Cornell men took down Brown’s team 177-123 while the Brown women were victorious, defeating the Big Red 156-143.

The women’s meet opened with a nail-biting 200 medley relay where Brown, featuring Jenna Zagoren, Ally Donahue, Caroline Vexler, and Reia Tong, defeated Cornell by a mere six hundredths of a second to take the victory in 1:45.17. Cornell retaliated with a one-two-three sweep in the 1000 free. Currie Murch Elliot led the way in 10:23.19, touching ahead of Lizzy Thayer and Abby Benkert. Brown’s Olivia Katcher, the Bears’ sole performer, finished fourth.

The Cornell women also saw success in the 200 free thanks to Hannah Bollinger and Anna Elling, who edged out Brown’s Sarah Cronin to take the top two spots. Bollinger and Elling touched in 1:52.36 and 1:52.53 while Cronin faded the last 50 to fall to third in 1:52.75. Bollinger found a second individual victory in the 500 free, where she overpowered Brown’s Korby Simpson down the back half to win in 5:04.99.

In the 100 breast, Donahue raced out to an early lead and never looked back, taking down her teammate Katie Roach 1:04.03 to 1:05.57. Currie Murch Elliot secured a third-place finish for Cornell, touching in 1:06.24. Roach came back to win the longer breaststroke, touching in 2:22.55 over Cornell’s Maya Hiebert (2:23.30). Donahue touched third, only a tenth back from Hiebert.

Grande took down Vexler and Cornell’s Louisa Hoffman to win the 100 fly, touching in 56.71 to defeat Vexler by four hundredths of a second. Hoffman touched in 57.56 for third. The 200 IM showcased Currie Murch Elliot winning her second individual event of the night. Murch Elliot hit the wall first in 2:05.94 over Jennifer Zhang (2:07.57) and her sister Billy Murch Elliot (2:08.30). Brown closed out the meet by dominating the 400 free relay, breaking Cornell’s 2015 pool record with a time of 3:25.42.

Molly Gelb secured two Brown wins in the diving events, winning the three-meter over fellow Brown Bear Rachel Speakman 239.48 to 237.52 and beating Cornell’s Kimmy Vitek in the one-meter with a score of 251.77 points.

Cornell landed a one-two punch on Brown right from the get go in the 200 medley relay. The A team of Dylan Sali, Alex Evdokimov, Luke Reisch, and Taylor Adams threw down a time of 1:31.45 to take the victory over their B team. Brown’s A relay grabbed bronze in 1:32.30. Grant Casey retaliated against the Big Red in the 1000 free, defeating Brandon Sweezer by eight and a half seconds to win in 9:32.62.

Reisch returned to the pool early to win the 200 free by touching out his teammate Kevin Ma at the finish. Ma charged hard the last 50 but ultimately fell to Reisch, the pair clocking 1:41.97 and 1:41.99. Brown junior Sovijja Pou, who led at the 150, faded at the end of the race to finish third. Reisch led another one-two Cornell sweep in the 100 fly with his teammate Jack Brenneman, touching in 50.37 to take down Brenneman’s 50.62 and Brown’s Brendan Woo.

Brenneman and Ma split the sprint freestyles for the Big Red with Brenneman picking up the 50 win in 20.81. His teammate Rob Lincoln nearly overtook him, touching in 20.83 for a close second-place finish. Brown’s Jack Nee completed the sub-21 list, taking third in 20.93. Lincoln again fell to a teammate by a couple hundredths in the 100, clocking 46.18 against Ma’s 46.15. David Zurmuhl took third in 46.37 to secure a podium sweep for Cornell.

Riley Springman earned a comfortable win for Brown in the 200 fly, touching three seconds ahead of his teammate Alex Treil. Springman (1:49.43) and Treil (1:52.57) both hit the wall ahead of the third place finisher, Cornell’s Vincent Declercq. Stange followed up a fourth-place 100 back finish with a win in the 200, breaking 1:50 to defeat Nicholas Brown. Stange’s 1:49.90 and Brown’s 1:50.60 both easily defeated Dylan Sali, who touched for bronze in 1:53.03.

Luo and Casey picked up their second individual wins of the meet in the 200 breast and 500 free, respectively. Luo clocked a 2:03.56 to once again touch ahead of Evdokimov (2:05.68). Chris Meyers got Brown on the podium with a third place finish. Casey used a strong front half to propel him to a four second victory over Sweezer, touching in 4:38.08 to Sweezer’s 4:42.14. Cory Mayfield (4:42.23) touched just behind Sweezer for third.

Cornell ended the meet with a win in the 400 free relay. The team of Ma, Adams, Zurmuhl, and Lincoln clocked in at 2:04.47 over Brown’s 3:06.39. Jonathan Schlafer swept the diving events, winning the one-meter with 304.73 points over Cornell’s Matt McCoy and defeating his teammate Sazzy Gourley to take the three-meter with 325.27 points.