Is Ledecky The Tallest 800 Free World Record Holder Ever? 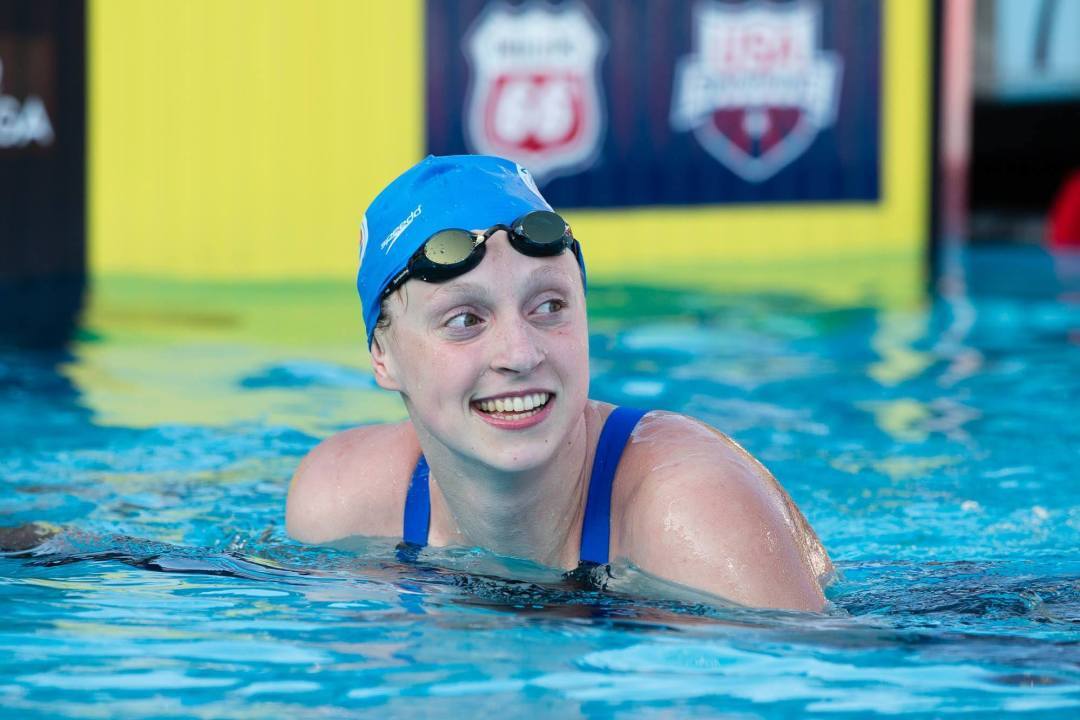 Is Katie Ledecky the tallest female 800 freestyle world record holder ever? Dating back to about 1960, she is, standing at 1.83m (approximately 6 feet tall). We can’t say for sure, because we can’t line them all up back-to-back to check for every millimeter, but based on the best available data, Ledecky is the tallest. At the very least, we know that while she is of pretty average height for elite female freestylers in general, her height is at the top-of-class among distance swimmers.

Click here to take a closer look at this graph of the height of the 800m world record holder in increments of five years. As you can see, the data is fairly stagnant through 2005 (Janet Evans held the record from 1987 to 2008), but then shoots up in 2010 (Adlington) and even more so for Ledecky in 2016. To take a look at the full list of 800m world record holders since 1962 (heights included), click here.

What significance does this have when it comes to Ledecky’s height and her distance swimming ability? Well, Ledecky isn’t particularly tall in comparison to the best female sprinters in the world. Sarah Sjostrom and Cate Campbell are both 1.86m tall, Bronte Campbell is 1.79m and Ranomi Kromowidjojo is 1.80m. Of course, the best female distance swimmers in the world are certainly taller than they were in the past, but still sprinters have been and always will be on average taller. So with her height and incredible freestyle ability, the fact Ledecky’s 100 free has gotten so good recently shouldn’t really be a surprise, she’s got the height for it. What is more unique is how good her 800 and 1500 are based on her height.

This graph shows the relative heights of the top five finishers at the 2015 World Championships in the 50 and 800m freestyles. Looking at the graph, we see Ledecky, who finished 1st in the 800 at Worlds, is actually taller than Bronte Campbell, the 50 free champ. After that anomaly, it is clear sprinters are generally taller than distance swimmers. Ledecky, at 1.83m, sits right in the average of the best sprinters in the world.

Ledecky continues to push the boundaries of what is possible in female distance swimming, but recently she has transformed from distance freestyle specialist to all-around freestyle specialist. She has come down to the 200 free the last few years and her 100 has improved dramatically this season. Ledecky has a great chance of bringing home three individual gold medals this summer in Rio, and with her recent 100m free prowess, she could add another two or even three relay medals. The height and talent of this young lady are proving to be a lethal combination in creating maybe the best female freestyle swimmer in history.

That is surprising, because girls are usually done growing taller by the time they hit 15.

Also, gotta love Janet Evans. I forgot that she was so small! Beating up on those 6′ East German “women”.

She was definitely taller than her listed height in London, I remember it being mentioned after trials that she had grown to about 5’10”

No surprise – Swimmers are getting taller all the time. Not WR holders, but both very fast 800 freestylers, Friis is 1.84m and Jo Jackson 1.86m.

Ledecky is still growing taller, seriously? That is scary.

She is not yet 19, don’t be so surprise.
And she’s still not the tallest one in US women team, Missy or Schmitt I think.(maybe Dana is taller than her too)

“After that anomaly, it is clear sprinters are generally taller than distance swimmers”

Your sample size is too small to make this claim. (Unless you have more data you’re not telling us about.)

Thanks for Swimswam for this article.
Wonder the 183cm data is correct or not?
Katie was not the highest one at 2013 Worlds 4×200 relay members, also not the highest one among 800 free top 3.
She is obviously higher than then, she used to be much shorter than Missy and Boyle, but not anymore.
Getting taller might be her secret become so powerful last year.(her stroke length become longer)
USA swimming should recheck the swimmer height for update their data base.
I’m curious the gap between Missy and Katie.

Interesting. Also a fun fact, to my knowledge the shortest male swimmer to win a freestyle event in the last olympics was 6’6″

0
0
Reply
Swimmer A
Reply to  Swimmer A

0
0
Reply
floppy
Reply to  Swimmer A