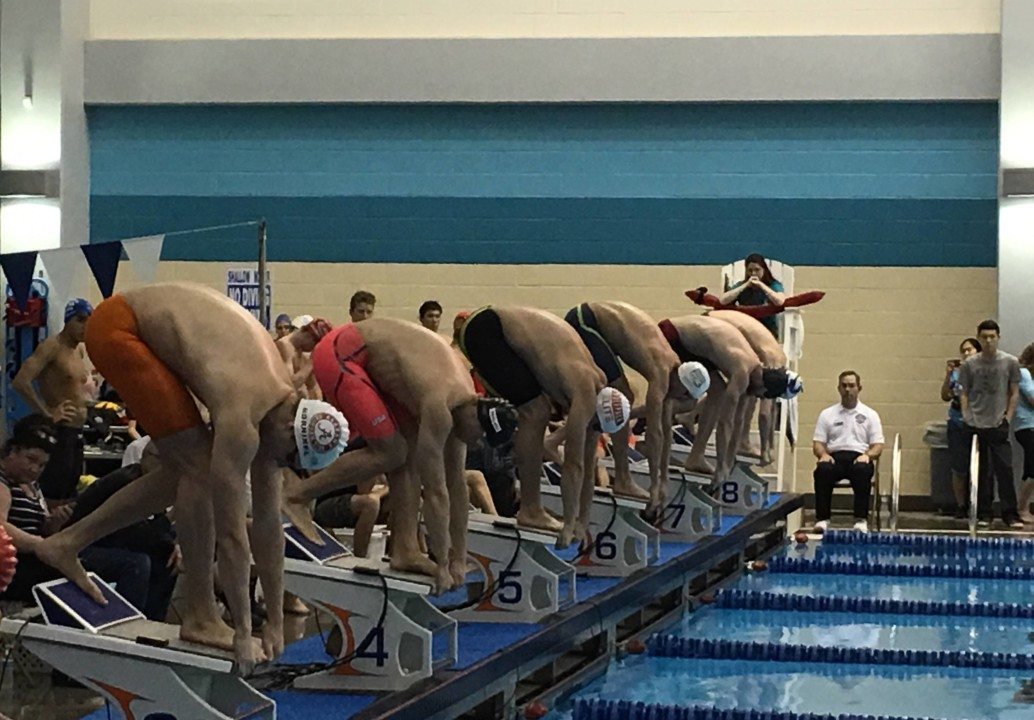 The King Marlin Pro-Am Classic offers a unique format designed to bring out the best from professional and amateur swimmers alike.  The 2015 meet at it’s new location in Lewisville, Texas certainly did not disappoint.  Prize money for this meet is awarded to professionals based on their “absolute finish” in the top three, meaning that amateurs who take podium positions decrease the number of cash awards given.  This makes the King Marlin meet a very interesting mix of seasoned professionals and top athletes from clubs around the country.  Each event can give $600 for a first place finish, $300 for second, and $100 for third, with prize money doubled for the 50 freestyle shoot-out and the 1650 freestyle.

After four days of inspired racing, the Mission Viejo Nadadores ran away with the team scores, followed by Lakeside Aquatics for the men’s, women’s and combined scoring.  Houston Swim Club was third place for combined and women’s scoring, while DAD’s club finished third for the men.

Ashley Twichell got an early lead, taking the mile out with an impressive 9:24.82 at the 1000. That split was better to the feet than she was to the hand on Thursday night and was only .38 behind her lifetime personal best. Her tempo never faded as she mowed down the meet record 15:51.45 set by Emily Bruneman in 2010.  Her 15:35.42 was a personal best, ranks her at #5 on the top all-time US Performers list, and is the ninth fastest performance all-time for the 1650. Stephanie Peacock was also under the meet record, touching in 15:51.11 to take the $600 prize. The final podium spot went to sixteen year old Sara McClendon of Mansfield Aquatic Club who bettered her seed time by sixteen seconds on her way to a 16:53.18 finish. Lakeside’s Lauren Savoy was also below the seventeen minute mark with 16:58.16 for fourth. Completing the top eight were Clovis’ Emily Niles (17:10.27,) LOBO’s Aine Scholand (17:14.87,) Texas Ford’s Abigail Koczo (17:16.42,) and Mission Viejo’s Samantha Nassif (17:20.23.)

Schroeder Y’s Ashlyn Schoof left no question about her ownership of the backstroke events this weekend in Lewisville.  Today, she was the only athlete below two minutes in the 200 back, and she was deep under it, touching in 1:56.41 for the top prize and the backstroke sweep. Mia Gibson from Wichita Northwest Y finished second with 2:01.85, followed by 14 year old Abigail Koczo at 2:02.43 in third. MVN’s Victoria Gong was fourth with 2:02.66, just ahead of LOBO’s Sefilina Maile at 2:02.75 and Wichita Swim Club’s Astrid Dirkzwager at 2:02.93.  Oshkosh Y’s Kiki Rice and MVN’s Jessica Epps completed the top eight finishers with 2:03.08 and 2:03.37 respectively.

Eugene Godsoe showed off his masterful underwater work on his way to easily taking the top prize in the 200 back with 1:42.58. 15 year old Kade Knoch from host team King Marlin was the only other athlete below 1:50 in the final heat, touching in 1:48.88.  Mission Viejo’s Logan Redondo took his second third place spot on the podium of the night with 1:50.08, touching just ahead of Wichita Swim Club’s Benjamin Patton at 1:50.37. Lakeside took fifth and sixth place on a 1:51.17 from Stephen Cheng and a 1:52.15 from Brendan Feehery. Mission Viejo claimed seventh and eighth with Daniel Kim’s 1:52.58 and Andrew Marilley’s 1:54.37.

Arianna Vanderpool-Wallace was out in 22.53 on her way to cutting an incredible .75 from the meet record in the 100 freestyle. She touched over two seconds ahead of the rest of the field with a blazing 47.12. Karlee Bispo took second place prize money with 49.30, and MVN’s Samantha Shelton took third with 49.62. Also below the 50-second barrier was Lakeside’s Lauren Pitzer at 49.94. Houston’s Logan Shiller (51.20,) LOBO’s 14 year old standout Sefilina Maile (51.41,) Clovis’ Jillian Hatch (51.48,) and Tri Aquatics’ Anna Munster (51.58) completed fifth through eighth places.

The men’s 100 free final featured four athletes below 44 seconds, with BJ Hornikel getting his hand to the touchpad first at 43.36 for the top prize. David Williams, who was fifth at the 50 with a 20.98 split, managed to blast a 22.66 second half to sneak in for the second place finish at 43.64. Tim Phillips turned in 43.88 for third, pushing Mark Weber out of the prize money at 43.99. Caleb Weir was fifth at 44.65. Austin Swim Club’s Timothy Squires was second at the 50 on a 20.70 split but ended up finishing sixth with 45.29. Mansfield’s Michael Thibert and DAD’s Club’s George Wozencraft took seventh and eighth with 45.50 and 46.03 respectively.

Former Kenyon standout Hannah Saiz brought home the second individual event win of the night for Schroeder Y with a personal best 1:55.00 for the 200 fly.  Lakeside’s Lauren Pitzer and Dallas Mustangs’ Rebecca Brandt took second and third with 2:02.02 and 2:02.60 to complete the podium.  Mission Viejo’s Jessica Epps was fourth with 2:03.07 followed by Oshkosh Y’s Payton Parman at 2:04.17.  Sixth went to Hannah Sumbera from Houston Swim Club at 2:04.36.  North Texas Nadadores’ Madelynn Tung and Houston’s Eszter Heins rounded out the top eight with 2:07.86 and 2:08.24 respectively.

Roland Schoeman blocked Brendan McHugh from sweeping all three breaststroke events by rocking a 23.77 50 breaststroke to take the top prize in the event.  McHugh fought hard, turning in a 23.88 but it wasn’t enough to overcome Schoeman’s magical rainbow and unicorn powered start.  Austin Swim Club took third and fourth in the event with a 24.24 finish from Kevin Steel and a 25.35 from Ryan Fisher.  Lakeside’s Tristen Disibio took fifth with 25.81.  Houston’s Davis Bryan edged out NTN’s Evan Kolde 26.37 to 26.41.  The Viking, in his third unlikely A-final of the weekend, mustered up one more burst of old-man strength to improve upon his prelim swim with a 26.87 for eighth.

An interesting side note: JCKW didn’t just have a remarkably old finalist in the 50 breast–  they also had the youngest finalist in the meet in the same event. Aubree Brouwer, whose 12th birthday was Saturday making her officially 11 years old in the meet, swims for the Viking as a member of Jasper County Killer Whales.  She earned a place in the C-final with 31.89, a time which would currently rank her third in the nation among eleven year old girls.

On an even more interesting side note, and a testament to the unique environment of the KMSC Pro-Am, the Viking wasn’t even the oldest finalist in the 50 breast.  59 year old Richard Neville of Ft Worth Area Swim Team earned a spot in the D-final with a lifetime best 28.98.

The Mission Viejo Nadadores squad of Victoria Epps, Samantha Shelton, Victoria Gong and Stephanie Peacock earned a come from behind victory on a 23.43 anchor to overtake Schroeder Y 1:35.31 to 1:35.67.   DAD’s Club took the third spot on the podium with 1:36.88.

Texas Christian University put together four 20 second sprinters to take the win for the 200 free relay.  The team of Garrett Hills, Jonathan Drewes, Chris Hearl and John Smith combined for 1:23.02 to hold back DAD’s Club who took second at 1:25.16.  Mission Viejo took the third with 1:25.76.