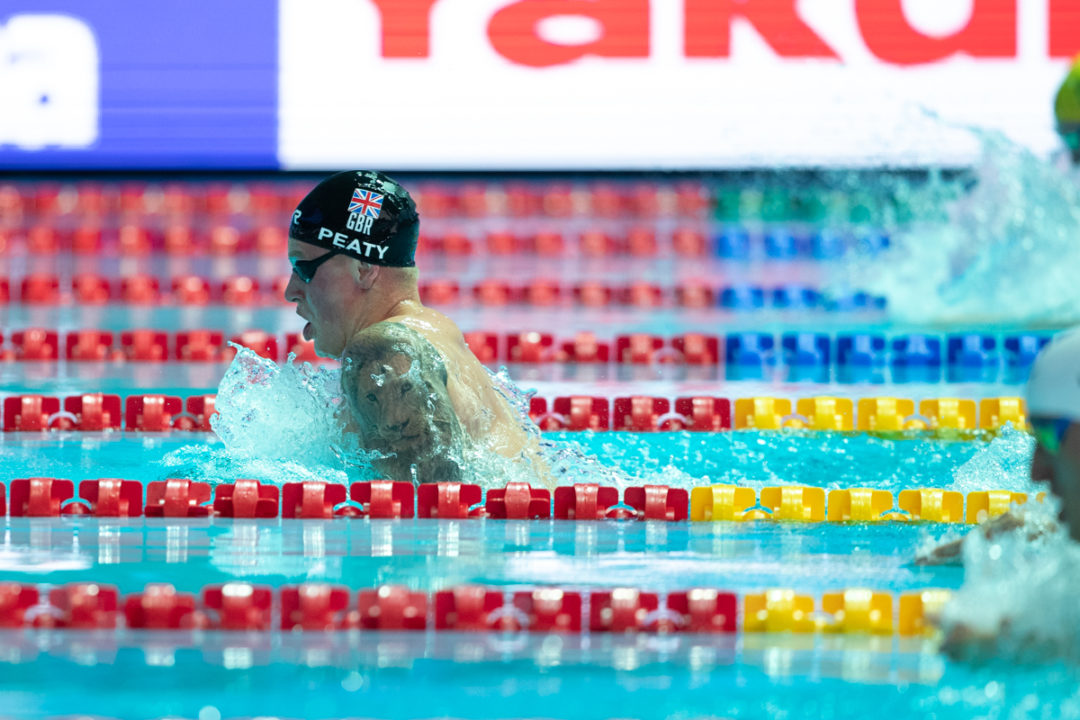 Adam Peaty got under 58 for the first time this year with a 57.70 prelims swim to record his 9th fastest performance in the event. Archive photo via “Rafael/Domeyko Photography”

Adam Peaty showed that he’s ready to race at this year’s British Olympic Selection Trials by opening with a 57.70 100 breast, establishing the top time in the world this season. Peaty’s swim surpasses Nicolo Martininghi’s 58.37 from Italian Trials and makes him the only swimmer under 58 in the event both this season and in history.

A 57.70 is a solid improvement from Peaty’s performances in the 100 breast so far this year. At the 2021 Manchester International Swim Meet back in February he posted a 58.87 in the prelims and a 58.82 in the finals and in March at the 2021 British Swimming Invitation Peaty raced again, posting a 59.45 prelim swim and was a 58.52 in the finals.

The prelims swim of 57.70 for Peaty is within a second of his current 56.88 world record from the 2019 World Championships and is his 9th fastest time on record in the event.

With the swim, Peaty is one step closer to having the top 20 fastest swims in the event as Ilya Shymanovich now sits with the 20th fastest performance in history with his 58.29. Should Peaty swim faster than that 58.29 during finals, he will achieve the feat.

Heading into tonight’s final, Peaty will be joined by two other sub-1:00 swimmers as James Wilby and Ross Murdoch posted swims of 59.32 and 59.53, respectively.

Bold Prediction- Cody Miller will destroy Peaty at the Olympics and go 55!

possible with multiple butterfly kicks here and there.

If you give Miller 25 meters advance, maybe 🙂

Probably not even tapered.

He said he is half tapered, didn’t he?

No one tapers or rests anymore

I hear all of the Americans are saving their tapers for LA2028. Medals are worth more in front of a home crowd.

I also heard no one is shaving until 2028. Everyone will have to wear swim caps over their chins to cover their 5 foot long beards.

except MA – he shaves every meet, right?

As Steve Nolan once said, “Tapers are for cowards.”

I can’t believe I am saying this, but his start & turn were the best in the race. He had previously put a video out saying he is about .4 faster to 15m this year than 2019, and you can really see he wasn’t exaggerating.

So he’s been doing a bit of vlogging and one of them he’s super zeroed in on his start saying thats where he could make up the most ground. His youtube channel is pretty fascinating.

ISL made this man even more dominant haha

Finish was a bit long though, if he nailed it would probably have been a 57.5 in the heats of a trials he doesn’t even need to rest for. Insane.

Start was very good for him but the guys next to him aren’t top tier, is there anyone in the final that has a good start to benchmark against? He will look like Dressel next to Wilby though.
On another note, he is looking big, when he swims the big meet he sheds the extra kg and brings out the 6 pack. He clearly isn’t at his 100% here.

I’ll be timing him to 15 in the final. Won’t be exact but it’ll give a good idea compared to previous times I’ve got. That said, he never used to come up ahead of domestic fields and I’m pretty sure he’s a fair chunk faster to 15 now.

Yeah, Peaty’s start at trials has traditionally looked no more than OK. Sure, better than Wilby, but roughly on a par with the rest of the field. Here he came up distinctly ahead of the others, so I’d say he’s definitely improved there. Same with his turn.

Goodburn and Murphy both had decent starts in their heats, so they might be a reasonable basis for comparison tonight.