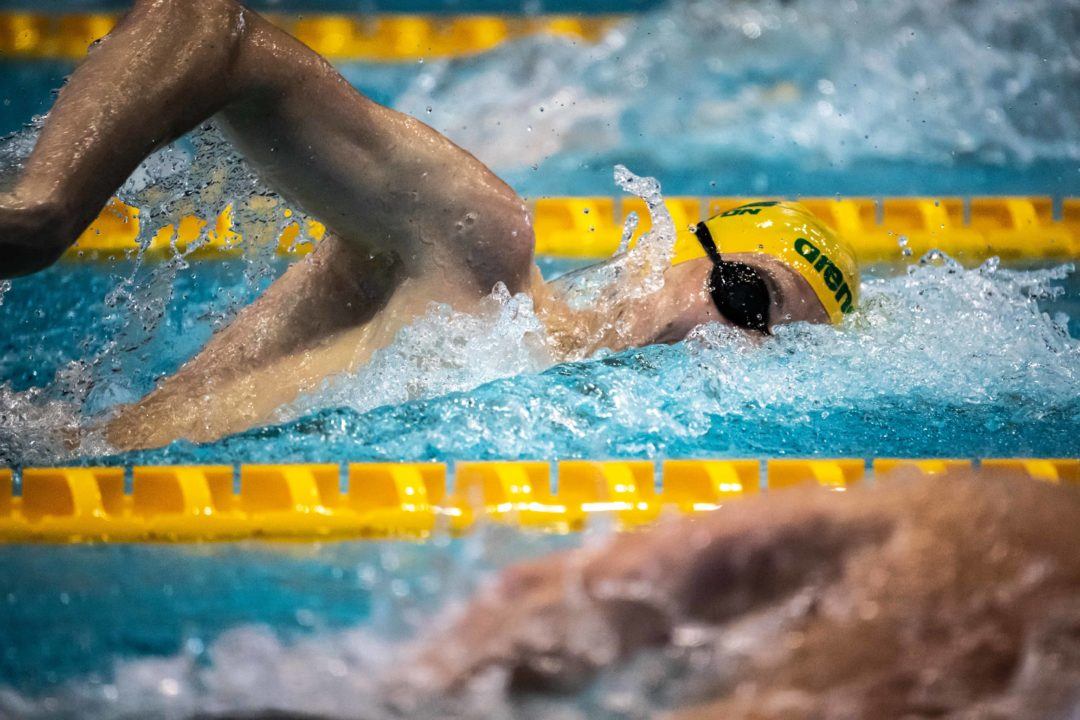 Incerti managed to move from 10th to 1st seed in the prelims of the 200 freestyle, out-swimming Thomas Neil and Elijah Winnington. Current photo via Mike Lewis/Ola Vista Photography

Racing got underway at the 2021 Australian Swimming Championships with the women’s and men’s 200 freestyle, 100 breast, 400 IM, and 50 backstroke. While the event is not Australia’s Olympic selection meet which will be held in June, most of Australia’s top athletes are present and already swimming fast during day 1 prelims, offering a preview of what’s to come.

In the men’s 200 freestyle prelims, 10th seed Zach Incerti powered to a 1:46.89 to hit the fastest morning swim by over a second as Thomas Neill and Elijah Winnington trailed with a 1:48.02 and 1:48.04, respectively. Incerti improved upon his entry time of 1:48.36 by nearly 2 seconds to earn a top seed in tonight’s final.

The 200 freestyle final will surely be a battle until the end as Neil and Winnington try to overtake Incerti along with the other trio of sub-1:49 swimmers in the prelims of Kyle Chalmers (1:48.18), Alex Graham (1:48.24), and Thomas Hauck (1:48.75). One of the big storylines during tonight’s finals and at Trials this June will be how many Australian men can get under 1:46 in the 200 freestyle following the recent Russian swimming trials where 4 men got under the mark.

Emma McKeon opened up the session by posting a 1:55.79 200 freestyle to get within a second of her entry time of 1:54.55. She was, however, fast enough to out-touch Australian record holder in the event Ariarne Titmus who was a 1:56.11 for second place in the prelims.

McKeon was also a little bit slower than her current season-best in the event of 1:55.56 from last month which stands as the 3rd fastest time in the world this season.

In the women’s 100 breaststroke prelims, Chelsea Hodges improved upon her season-best of 1:06.91 by 1 one-hundredth with a 1:06.90 to claim the top spot in the prelims. Hodges was the only woman in the field to crack 1:07 in the event and managed to establish some distance between herself and co-top seed going into the meet, Jessica Hansen. Hansen was also entered with a 1:06.91 but ultimately fell to 5th in the prelims with a 1:08.47.

In between Hodges and Hansen, Abbey Harkin hit a 1:07.45 for second while Jenna Strauch was a 1:07.64. Tessa Wallace managed to break her 7th seed in the event by hitting a 1:08.41 for a 4th seed into the finals. One notable absence in the event was 2016 Australian Olympian Georgia Bohl who was entered in the event in 6th place with a 1:07.94.

As for the men’s 100 breast, Zac Stubblety-Cook managed to overtake top seed, Matthew Wilson with a 1:00.23. That was the top swim of the morning and Wilson actually fell to 3rd in the event with a 1:00.70 as Jake Packard snuck ahead in a 1:00.44. The three of them are only separated by 0.47 seconds heading into tonight’s final which should make for a solid race. Stubblety-Cook, Wilson, and Packard were all entered with times under a minute and will be looking to crack the 1:00 barrier in the finals.

Jenna Forrester swam a 4:41.66 as the fastest woman in the 400 IM prelims while Meg Bailey closely followed with a 4:41.91. Having represented Australia at the two most recent World Junior Swimming Championships, Forrester will soon be making a bid for her first Olympic performance and has a chance in the finals of the 400 IM to get under the FINA A standard of 4:38.53. She and Bailey are well ahead of the field so far as Tara Kinder was the third-fastest prelim swimmer in the event with a 4:48.12.

In the only non-Olympic events of day 1, Kaylee McKeown and Mitch Larkin established the quickest swims in the respective women’s and men’s 50 backstroke prelims. Both of them were rather close to the national record in the event as McKeown’s 27.52 was within 0.30 of Emily Seebohm‘s 27.37 NR and Larkin got within 0.20 of his 24.54 NR with a 24.67.

McKeon is a stud! Super underrated yet so consistent. Watch out for her 100m Fly in Tokyo

Emma Mckeon not listed in the 200 free final despite being the fastest in the heats hope she ok?

Resting for the butterflies and 100 free maybe .

Maybe she never intended to swim the final and that’s why she went 1:55 in the heats?

Emma intervied 2 days ago said she excited to be here and racing yet she pulls out of the final go figure huh?

Confirmed by commentators and also said she’s training through the meet which makes her 1:55 really impressive.

I see all the streams listed on Prime except for Day 1 Finals. Are they opting to not stream just day 1 finals?

There are no day1 finals (in day 1 only heats, the finals are on the morning of day2)

I can’t find the stream on Amazon Prime

Try https://swimtv.com.au/
It cost AU$6 to stream the entire meet

The finals are not at night in the morning replicating Toyko . Larkin 50 back fastest in the world 2021?