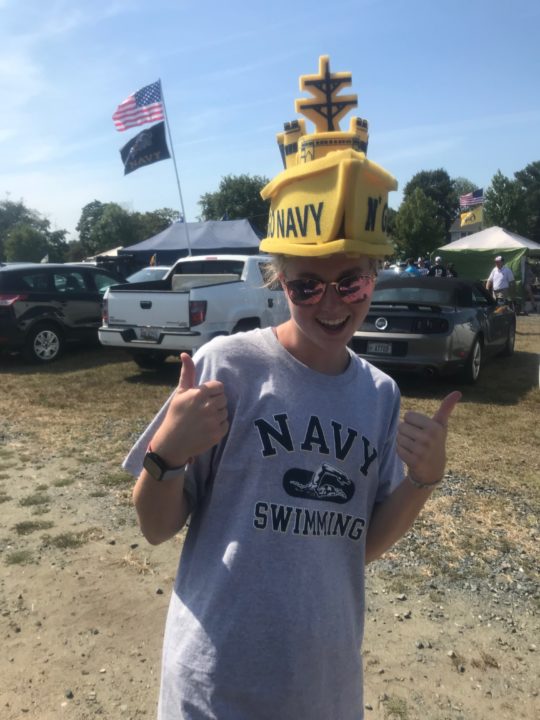 The US Naval Academy is already building a powerful women's class of 2021 already, adding a number of backstrokers and butterfliers, including Weaverling.

Rising high school senior Catherine Weaverling has verbally committed to swim for the US Naval Academy, pending receipt of an appointment.

Weaverling is from Glen Mills, Pennsylvania, which is located in the southwestern suburbs of Philadelphia. She swims for the Delaware Swim Team, which is located just across the state line, and attends Garnet Valley High School.

Weaverling finished 8th at the Pennsylvania High School State Championship meet in March, just before the end of the meet was canceled because of the burgeoning coronavirus pandemic.

Her best time in the 100 fly is 54.87, which she swam at her high school league championship meet in February before adding a second at the state meet. With a year to go before she’s scheduled to begin her collegiate career, she’s just a tenth outside of what it takes in that event to make Navy’s all-time top 10 in that event.

She is arguably as good, if not better, in the backstroke events, though she didn’t get to fully complete her season in those events. She swam her best time in that 100 back during her sophomore season at the Christiansburg Sectionals, which didn’t happen this season.

She was 56.1 in the 100 back in prelims at the Pennsylvania state meet, which wound up being recorded as a timed final.

Navy had one of the best mid-major butterfly groups in the country last season. Season-long, they had the top 3 times in the conference in the 100 fly, and 5 of the 8 best. Only 2 of those swimmers will exhaust their eligibility by the time Weaverling arrives on campus.

The 100 backstroke group, while still deep, wasn’t quite as strong as the butterfly group. Navy only had 1 swimmer in the top 8 of the Patriot League in the 100 back last season, though they also had the #9, #10, #11, and #12 (all freshmen and sophomores) performers in the conference.

They were much stronger in the 200 back, where they had the 4 best performers in the conference.

Weaverling is already at, or close to, top 8 times in all of those events at the Patriot League level.