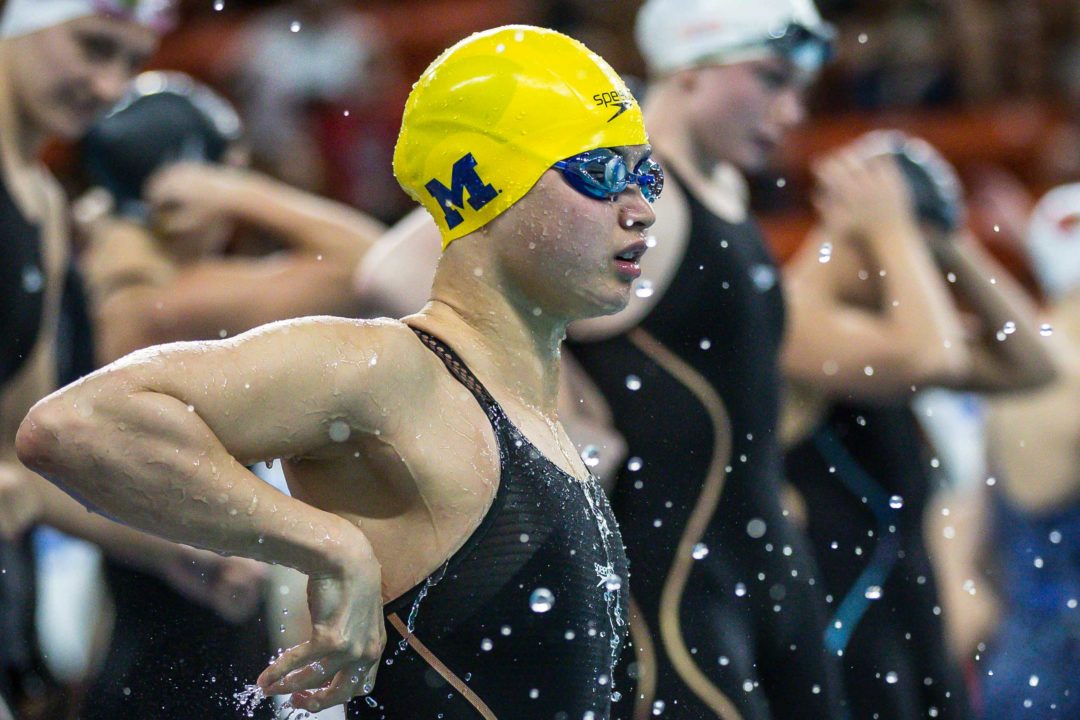 Canadian World Champion Maggie MacNeil posted a 55.6 in the 100m freestyle during a post-practice time trial, which falls just a second shy of her PB. Archive photo via Jack Spitser/Spitser Photography

World Champion and University of Michigan standout Maggie MacNeil swam a 55.6 in the 100m freestyle during a recent time trial.

MacNeil has been training at the London Aquatics Club in Ontario since the coronavirus pandemic forced athletes off of the University of Michigan’s campus, which resulted in her going home to Canada. Due to travel restrictions, she has been unable to rejoin the team in Ann Arbor.

MacNeil posted a video of the race to her Twitter page:

The time trial was done after a practice, but she was wearing a tech suit.

MacNeil has not swum an official flat-start 100m freestyle since June 2019. Her best time of 54.51 is from the 2019 Canadian World Championship Trials, which were held that April. Later that year at the World Championships, she split a 53.18 as a member of Canada’s 4×100 free relay to help the team earn a bronze medal before beating world record holder Sarah Sjostrom in the 100 butterfly to claim her first individual World Championships title.

In official competition, she has only been under 55.6 on four occasions: twice each at the 2019 Canadian World Championship Trials and the Counsilman Classic meet in Indianapolis in June of that year.

Although best known for her butterfly prowess, MacNeil ranks 7th all-time in the 100 yard freestyle with her time 46.57 from the 2020 Big 10 Championships. Her best long course 100 free time ranks just outside the Canadian all-time top-10, coming in 11th.