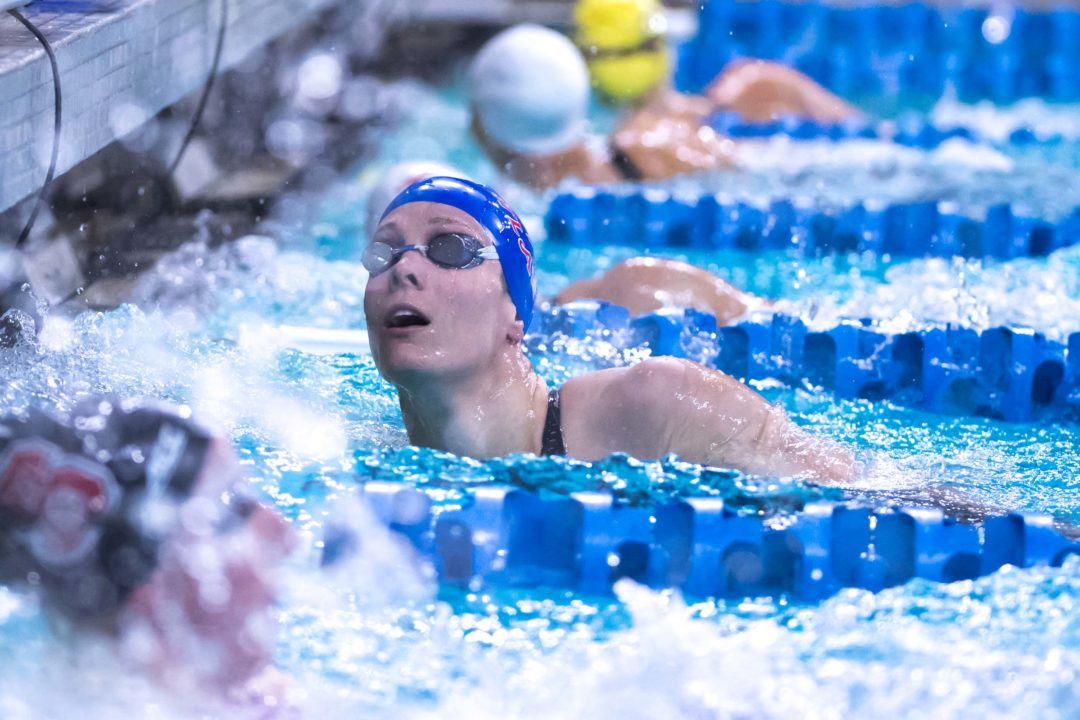 4-time Olympic medalist Amanda Weir (above) will join the Cali Condors in Maryland, though the team will be without Ariarne Titmus and Mitch Larkin. Archive photo via Mike Lewis/Ola Vista Photography

The Cali Condors have added a new name to their roster for the 2019 International Swimming League stop at the University of Maryland this weekend. The meet, which runs from November 16th-17th, will be the final regular-season meet for the American teams before the top 2 head to the final in Las Vegas in December.

The new addition to the team is Amanda Weir, a 33-year old veteran who has represented the US at the 2004, 2012, and 2016 Olympic Games. Weir joins the team as they lose Danish sprinter Signe Bro for the meet, helping give the Condors a little more sprint depth on the women’s side. Bro made one relay appearance for the Condors at their last meet in Naples, splitting 53.68 on their “B” 400 free relay, and that was the extent of her racing.

Weir, meanwhile, has lifetime bests of 24.18 and 52.95 in the 50 and 100 freestyles in short course meters, respectively, from racing at the 2016 World Short Course Championships. Her efforts earned her gold medals as part of the American teams in the 400 free and 400 medley relays. In total, she has 17 World Championship medals (7 in long course, 10 in short course, all in relays) and 4 Olympic medals (3 silver, 1 bronze, and all in relays).

The biggest hit the team will take on the women’s side, however, is the absence of Ariarne Titmus. The 19-year old Australian, who knocked off Katie Ledecky in the 400 free at this summer’s World Championships, is sitting out from DC after winning the 400 free and placing 2nd in the 200 free in Naples. Katie Ledecky is not expected to race for the DC Trident in Maryland (to be confirmed), so there wasn’t to be another Titmus-Ledecky showdown anyway.

The Cali Condors still have Melanie Margalis in that 400 free, who placed 2nd in the race in Naples, and their next-best option to fill that slot is probably Hali Flickinger.

The Condors will also be without Mitch Larkin for the meet. Larkin, who trains at the same St. Peters Western squad as Titmus. That’s a blow for the Condor men, who were outpaced by their women in scoring at the first 2 meets even when they were joined by Naples MVP Caeleb Dressel. Larkin scored 21 individual points in Naples and swam on 2 relays.

The team will still be a little short-handed in DC, with only 13 men and 12 women on their roster (they’re allowed 14 of each gender). That means extra swims for their athletes.

All of that still doesn’t leave much pressure on the Condors headed into the US Derby. Among the 4 teams that will compete (DC Trident, LA Current, New York Breakers), the Condors will have the smallest hit by absences, and further they’re all-but-guaranteed a spot in Las Vegas after 2nd-place finishes in each of the team’s first 2 meets.

Ought to have weighted the 1st 2 comps better . Fina ‘s clusters at least are cmpressed in time & travel .& you can get some blocs in between .

I think FINA is winning this in the publics mind especially with Cate winning the $300,000. . Ppl think , now that is a decent purse & everyone knows who dhe is . Morozov not so much because nobody knows who he is . As yet ppl only know Wld & Olympic lC stars.which he is not . He’s kinda always there but not . Although if he smells money ….

Such a very underrated olympian

She did some underrated whining when Volmer got the finals slot on the free relay last time.

She should’ve been in it she earned her spot bruh….

Had her chance in the prelims to make it a non-question. It’s why they take 6. But griping before finals sure put the “I” in “team.”

She was faster than Vollmer…

Phelps didn’t even swim the 100 at trials and was on the finals relay, so it’s not like it’s etched in stone.

the only griping I see here is from Ol’ Longhorn

Wouldn’t have had anything to do with David Marsh and coaching staff “communication” of the decision, now would it Ol’Whiner?

Is it weird that Katie might not be competing in her hometown area when she is captain? I don’t blame her but weird.

Especially after showing up for the PSS last week. I don’t see any reason she’d miss though

Yeah, but at least it exposes that “captain” is a meaningless show-term.

Are you talking about Ledecky? She’s not the captain, Natalie Coughlin is.

Ambassador then! And Natalie has only swum once too. She isn’t on roster yet either.

I really hope Ledecky isn’t gonna ditch out on the meet that’s like, half an hour from her home pool.

Most likely doesn’t look at ISL as the source of income. She promised the support of this movement – she showed it at the most important first meet of the league. The upcoming meet is of low importance and won’t change anything in teams standing. I don’t see any reason for her to swim this SC races. I think her contract was just about this one time participation only. If it was any actually.

She’s at Stanford now, so it’s a bit more than half an hour away.

Kylie Masse has been 4:03 in the 400m freestyle (SCM) at an in-season dual meet (see results below), so she could offer an unexpected option for the Cali Condors in that event.

With Larkin gone, could we see a Dressel 2 IM?