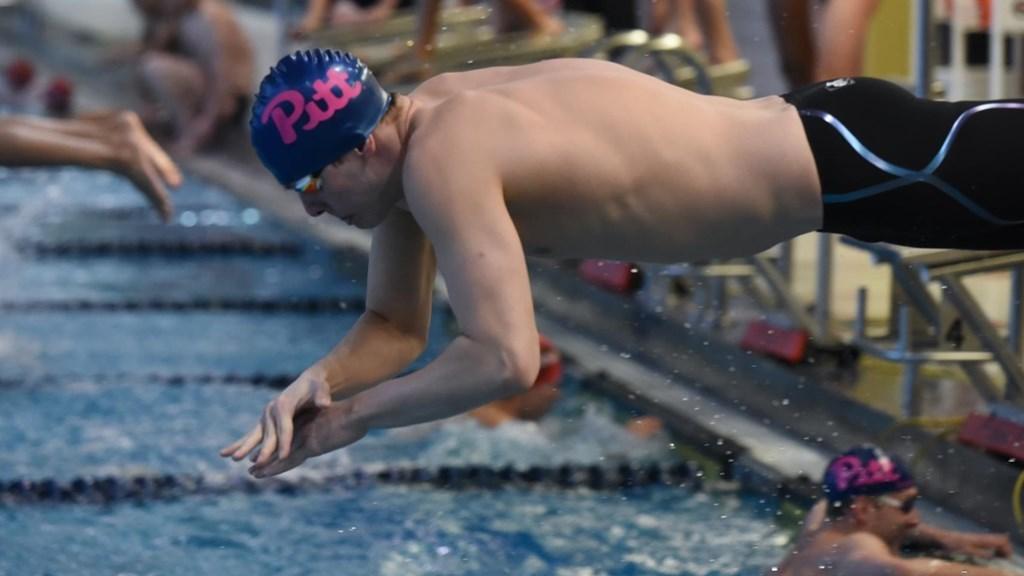 In their 2nd-to-last regular season meet of the year, Blaise Vera contributed to 3 of the 4 School Record-breaking swims on Saturday. Current photo via Pitt Athletics

The wins were expected, but the meet came with an unexpected outburst of speed from Pitt, with 4 school record swims falling on Saturday.

Sophomore Blaise Vera started the day off with a 19.62 in the 50 free, which broke his own record of 19.66 – set at November’s Ohio State Invite. He then bookended the meet with another record, finishing the day with a 19.55 leadoff on Pitt’s 200 free relay. That swim spurred the team to a 1:19.52 – their season-best by half-a-second and another school record. It broke the program’s oldest relay record, having stood since 2006.

Vera still probably needs to drop a few tenths to earn an NCAA invite (it took 19.36 for an invite last year), but regardless of where his season finishes, John Hargis and the Pitt coaching staff will have a headliner to use in their recruiting pitch in Vera: coming into this season, his lifetime best was a 20.04 in the 50 free. He’s now been faster than that 7 times this season already.

“With how hard we’re currently training, it’s surprising to be setting school records at this time of year,” Pitt head coach John Hargis said after the meet. “But it’s a credit to the student-athletes and just how talented and hard-working they are. With so many fans and alumni here today, it was great to see Blaise, Maddie and the men’s 200 free relay make Pitt swimming history. It’s also a tremendously exciting sign of what’s to come for our team at the ACC Championships next month. We have so much more to offer in so many events.”

His 18.9 relay split wasn’t too shabby either👀

Coach Hargis has Pitt ready to contend for the ACC title. The swimmer’s times are great for the end of January.

It will take more than that to beat NC state, Louisville, and Virginia.