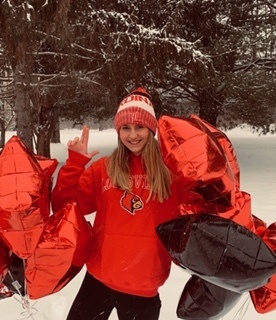 Louisville continues to build what is probably their best class ever with their latest addition: #14 Paige Hetrick of the Bradford Family YMCA. Hetrick is part of their class of 2024.

Beyond excited to announce my verbal commitment to continue my academic and athletic career at the University of Louisville. Couldn’t be more thankful for my family, friends, and coach for helping me to this point. Can’t wait to be a part of this family. Go Cards!!

Hetrick is incredibly versatile. While she’s primarily a freestyler and backstroker, she’s strong in sprint fly and has strong times in the IM.

Hetrick joins a Louisville program that has done very well with sprinters and mid-distance freestylers. Comerford and Kelsi Dahlia immediately come to mind, with Comerford proving to be excellent from the 50 up through the 500, while other swimmers like Sophie Cattermole and sprinters Avery Braunecker, Casey Fanz, and Lainey Visscher, have really done well in recent years.

Congratulations to Hetrick!!
In reference to the point about top ranked recruits I believe Grace Oglesby was also ranked in her class (#9 in 2016)

Oh didn’t catch that, thanks!