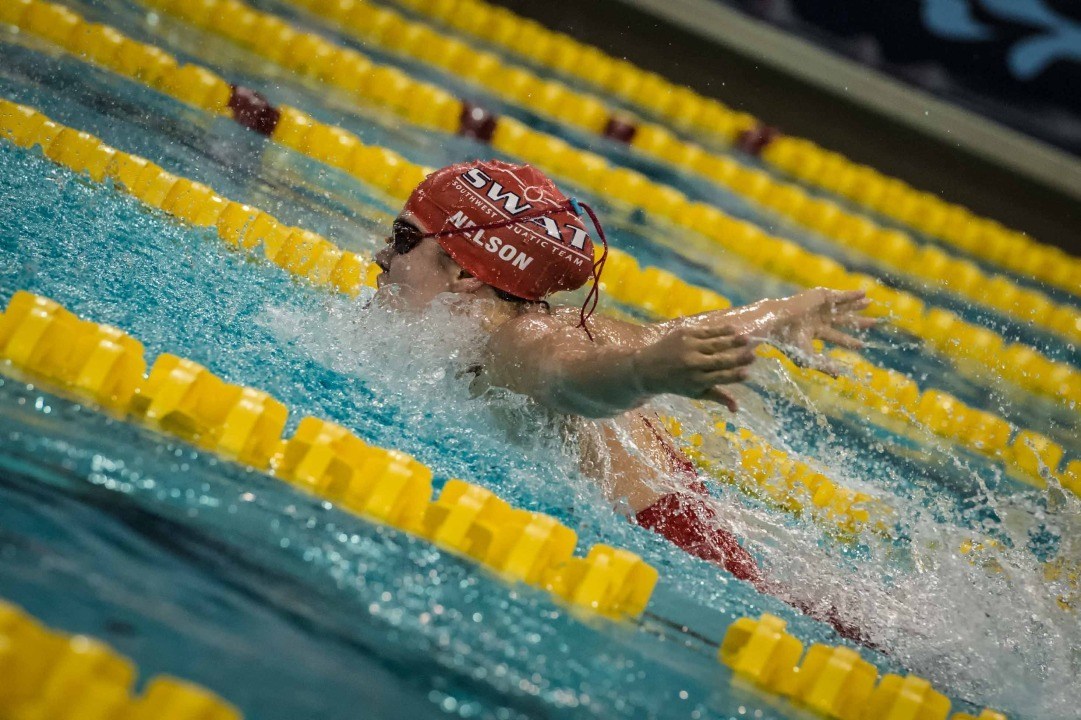 July 1st marks the opening of the NCAA’s recruiting season for swimming, with coaches finally allowed to pick up the phone and start recruiting the nation’s top high school seniors to their respective college programs.

As we do in these rankings every season, we’ll begin with an explanation/disclaimer.

Our boys rankings are here.

Disclosure: there are a lot of high school seniors in the country, and no really good, complete, 100% accurate listing of them all. If you don’t see your favorite swimmer on the list, feel free to point them out in the comments. There’s a chance that we disagree with your assessment of their spot in the top 20, and so long as it’s done civilly, there’s no problem with differences of opinions. There’s also a chance that we’ve simply missed a no-brainer (we’ve taken every precaution to avoid that), and if that happens, we want to make sure we correct it.

(All best times are in short course yards.)

Meghan Small was the star of YMCA Nationals this past season, and it would be no large surprise to see her become the star of college nationals in the near future. Small should come in the door with shots at NCAA titles in both IM races, and she’s also an accomplished backstroker. On top of that, her 200 free is fast enough to make her a relay threat on at least the 800 free relay. Versatility, a couple standout events, great endurance and relay capabilities – what more can you look for in a top-tier recruit?

Wisconsin’s Beata Nelson is a machine underwater, which makes her a dangerous NCAA swimmer from the get-go. Nelson is the national public high school record-holder in the 100 fly and could easily turn out to be one of the top few butterflyers in the nation as a freshman. Her backstroke is nothing to scoff at, either, and she’s got enough speed in the sprint freestyles to be a free relay factor as well as a potential game-changer on the medleys.

Mann’s status here gets hurt slightly by her distance swimmer status, but she’s the rare distance swimmer who can still procure a top-3 ranking despite not being much of a relay threat. Mann’s lifetime-best would have been second at last year’s NCAAs in the 1650, and she’ll instantly be one of the top distance swimmers in the college ranks. A killer 400 IM only adds value, and the hope will be that her 200 free can improve enough to make a relay splash in the 800.

The California-based Junior National champ is a dream relay piece. Fast from the 50 to the 200, Moseley could turn out to be a plug-and-play relay swimmer in any of the 5 relay events – or all of them – from her freshman season onwards. Her 200 free is most impressive, leading a class that includes some top-tier 200 freestylers.

Part of a dominant group at the Carmel Swim Club, Adams is a multi-event star. She’s got outstanding backstroke times that will put her in the thick of a brutal NCAA stroke discipline, and she’s also got legitimate potential as a developmental relay swimmer – maybe more than that in the 200 free, where she’s among the best in her recruiting class.

It seems a bit odd putting U.S. Short Course World Champs team member Katie Drabot all the way at #6, but this is a very tough class, particularly in the freestyle events where Drabot excels. Still, she’s a rangy talent who will give coaches lineup versatility and relay options. An underrated part of Drabot’s skill-set is her IM prowess – she could be an NCAA point-scorer in either IM her freshman season, depending on what events she winds up swimming in college.

Another stud from the Carmel Swim Club. Burchill is more of a pure sprinter than her teammate Adams, but that could work in her favor as a relay swimmer. Burchill is knocking on the door of a 21-second 50 free, and is also just outside of NCAA scoring range in the 100 fly.

Pennsylvania’s Allie Szekely has had a very unique development. A high-profile young breaststroker, Szekely has really broken out in backstroke lately, to the point where it’s those events that might attract the brunt of college recruiters. Still, it’s her 400 IM that would have scored at last year’s NCAAs. Szekely is a Swiss Army knife of a swimmer that should give one college coach a wealth of lineup options.

Oglesby doesn’t have the event versatility of some of the names above her, but what she does, she does well. Very well. Swimming out of Louisville, Kentucky, Oglesby is one of the nation’s best high school butterflyers over both distances, and could be a huge medley relay option down the road. She’s already committed to her hometown team, the Louisville Cardinals, and will follow in the footsteps of American record-holder Kelsi Worrell.

The only breaststroker to make our list, Minnesota’s Lindsey Horejsi is already under a minute in the 100 – an NCAA scoring time in 2015 – and is close to NCAA points in the 200. She’s got some potential in the 200 IM that could be developed as well. Breaststroke can often be a hole that sinks an otherwise-sound medley relay, and Horejsi is a head above the rest of her class, which should intrigue any team with a breaststroke hole heading into 2016-2017.

So, Beta chose to swim “All City”, the outdoor rec league in Madison for her summer championship meet this past weekend. She could have chosen other meets as there were many going on this past weekend, Wisconsin State, Futures, NCSA, Juniors. I get it “All City” gets the major press coverage in Madison- heck they’ve been at it over 50 years but it still is summer league. The times won’t be found anywhere but the Wisconsin State Journal or the meet website: http://highpointallcity.com/swim/

Your argument seems kind of silly. You seem to be implying that Beata wants the Madison press coverage but if she wants publicity then doesn’t it make more sense for a swimmer of her caliber to go to one of the bigger meets that you mentioned? Maybe she wants to go to this “all city” meet because her friends are there/it is fun/like most people, it is what got her started in swimming in the first place…..I do not know beata at all but it seems like a lot of people here have some animosity towards her or maybe even jealousy, but if I were her I would use it as motivation to do even better! Let her go to… Read more »

Uh. No Wisconsin swimmers that are up and coming? seriously. How about Emma Lasecki, Kaylyn Schoof or Gabriela Pierobon Mays

Great list however Drabot should be up above Nelson. Drabot has a resume a mile long. And she can swim anything from the 50 free to the mile.

Ehhh, If you look at the college recruiting website, Drabot is first in the Nation. Plus, Drabot has mental toughness. I have NEVER seen Drabot pack up her toys and go home if she is beaten. I have seen Nelson scratch the rest of the meet if she gets beaten. I have seen her crying at the end of the pool and timers helping her out because she was so upset that she was beaten in prelims. I think those kinds of displays are why some of us from Wisconsin think Drabot should be ranked higher. It may not really be mathmatical, it’s just that we know them and we’ve seen how they act. When you’re in college, you have… Read more »

Unless you know all the details related to injuries she has swam through over the years you should not be so quick to judge why someone leaves a meet. I cannot think of many races she has lost in the state of WI and for someone to think she would be upset at losing in prelims is laughable. Why can’ we just enjoy that WI has two of the top swimmers in the county in this class and quit with the downgrading of either of these phenomenal swimmers.

I agree! We have two of the top and many others in the making! Some of the faster college swimming graduates this year were NOT in the top 20 when they were juniors and look at them now! It’s pretty early in their careers. Let’s put this all I perspective. It’s nice that made this list. Go Wisconsin!

Allie has a grand future potential ahead of her. Always been a fav. Good luck to all these gals.

Cannot wait to watch Meghan Small and Ella Eastin battle it out in the IMs! Hoping Ally Szekely can challenge them too. I’ve always been a Szekely fan when I first noticed her in 2012. While so many criticize her breast, I think it just looks so powerful. She strays from the traditional technique and it works for her. Just look at Rebecca Soni, so many said she could never do well with her breast, but look what she accomplished! And considering Szekely also does track part of the year, so she doesn’t swim year round (I don’t know if that is still true), she is an extremely impressive young women. Also, I think Keaton Blovad should be ranked a… Read more »

Agreed on Blovad! She was out of the country for over half a year at 14 and also had 6 coaching changes from 14-16. The switch ups seem to have improved her versatility overall and are proving to be positives in the long run. She seems to be back even stronger now- and she just committed to Cal for 2016. Good things to come for this swimmer in the next year and then in college!

Two in the top ten from Wisconsin! There are few more emerging Wisconsin swimmers worth watching for in the coming years.

Which of these recruits are looking at Stanford and have the grades to be admitted?