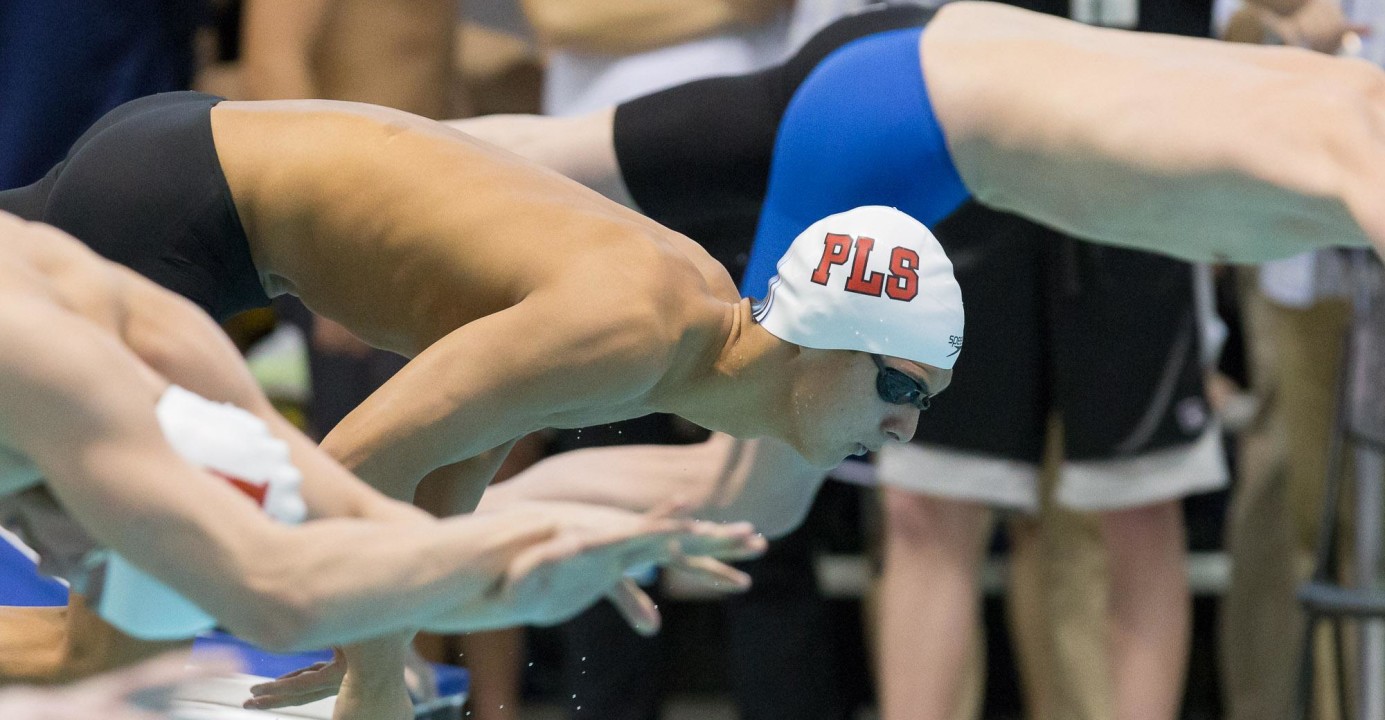 Pleasanton's Maxime Rooney is a swimmer on the rise, and his freestyle prowess ranks him at the top of our recruiting class. Archive photo via Tim Binning/TheSwimPictures.com

July 1st marks the opening of the NCAA’s recruiting season for swimming, with coaches finally allowed to pick up the phone and start recruiting the nation’s top high school seniors to their respective college programs.

As we do in these rankings every season, we’ll begin with an explanation/disclaimer.

Our girls rankings are here.

Disclosure: there are a lot of high school seniors in the country, and no really good, complete, 100% accurate listing of them all. If you don’t see your favorite swimmer on the list, feel free to point them out in the comments. There’s a chance that we disagree with your assessment of their spot in the top 20, and so long as it’s done civilly, there’s no problem with differences of opinions. There’s also a chance that we’ve simply missed a no-brainer (we’ve taken every precaution to avoid that), and if that happens, we want to make sure we correct it.

(All best times are in short course yards.)

Rooney made a very early commitment to the University of Florida, where he’ll join a strong tradition of 200 freestylers.

Upper Dublin’s Michael Jensen gives Rooney a good run for his money. Jensen is a bit faster in the ever-important 100 free, and pretty comparable in the 50. And like Rooney, Jensen is on the rise – at this time last year, he was just 44.3 in the 100 free and 1:39.39 in the 200. That’s a huge improvement curve, particularly in the 200 free, and it should make Jensen a high-upside target for any program. His butterfly times are a nice bonus, and could give him extra versatility on medley relays should any team have plenty freestylers but a hole in butterfly.

If there’s a theme to the top of this class, it’s rapid improvement curves. Mission Viejo’s Grant Shoults also conforms to the pattern – since last summer, he’s dropped from a 4:26.47 in the 500 to an outstanding 4:15.56. That’s a time that would have scored at last year’s NCAA Championships, and you don’t often see male recruits coming in the door with scoring times.

Shoults’ distance-based skill keeps him just below Rooney and Jensen, but his 200 free is among the best in the class, meaning Shoults should be a relay contender on at least one relay team (the 4×200 free). Mission Viejo is known for its tough distance training, which should let coaches rest easy about Shoults’ work ethic as well.

Not only does True Sweetser enter the NCAA with arguably his class’s best name, he also holds the class’s top mile time. That 14:49 would have finished just off the podium at the 2015 NCAAs, earning 7 points. Consider that only 34 programs in the entire country scored more than 7 total NCAA points last season and you’ll see why Sweetser deserves a top-5 bid despite being a pure distance man.

Like Shoults, he’s got enough 200 free potential to be a relay factor at some point in his career, and like the entire top 5, he’s been on a crazy trajectory over the past year. At last December’s Winter Nationals, he dropped 17 full seconds off his mile in one fell swoop, and he’s dropped from a 15:26 to a 14:49 since 2013.

Xiangei Xie comes in with two of the most intriguing times in this class – most notably a 1:45.81 in the 200 IM that should make him an instant scoring threat at the conference level for most teams. The downside, though, is how ridiculously hard it’s been to score at NCAAs in the IM events of late. Last year, it took a 1:43.68 just to sneak into the B final in the 200 IM and have a chance of putting up just a point or two. Xie’s 100 fly is also right on the cusp of NCAA-scoring level in a brutal event. While he doesn’t have a lot of eye-popping times in other races yet, that IM prowess would suggest he’s got some versatility to him that should intrigue college coaches.

Speaking of versatility, our next swimmer is Arizona’s Mark Jurek, another flyer/IMer. Jurek really shines in the 200 fly, where he sits within a second of a 2015 NCAA scoring time. He’s got enough short speed in the stroke to be a threat in the 100 as well as a possible medley relay leg. On top of that, he’s one of the class’s best IMers in both distances. Nothing makes writing a college dual meet lineup easier than a great all-around IMer, which boosts Jurek’s value in the recruiting market.

Washingtonian Thomas Anderson is another versatile option on the recruiting market. Specializing as a backstroker, Anderson could also be a college factor in butterfly. Anderson is only about a second off last year’s national scoring time in the 100 back, and though this class is full of solid backstrokers, he rises above the tide in both distances. And in a class with only a pair of swimmers under 20 seconds in the 50 free so far, Anderson’s 20.10 becomes fairly valuable in terms of sprint potential.

Central Bucks swimmer Greg Brocato leads a trio of sprint freestylers who are nearly identical. Brocato gets the edge for having the best 100 time of the bunch, and he’s also the rangiest, with enough of a spark in the 200 that he could eventually turn into a relay threat across all three freestyle distances. He’s also right on the verge of cracking 20 in the 50 free, something that could happen at any point during his senior year.

It seems a bit odd to have our first 19-second sprinter all the way down at 9, but this is an odd class for sprints. That or we were all spoiled by having Caeleb Dressel and Paul Powers in last year’s class. Jones has a touch more speed than Brocato without the range, which makes this almost a wash. Brocato gets the edge for superior 100 free and 100 fly times, but senior season performances will make all the difference.

Yet another 43.9/20.0 sprinter, Vergani is actually Italian, but makes our list as he competes and trains in the U.S., with the Bolles School Sharks program that launched Dressel, Ryan Murphy and Joseph Schooling among so many others. Vergani, too, is on the edge of joining the 19-second club and should be a key developmental relay piece for any college program.

Where does Micheal Andrew fit in with these high school seniors??

He doesn’t. He is professional, meaning he is ineligible to swim in college.

You guys left off one of the fastest swimmers Dean Farris.

And my oh my what a miss that was, kids definitely top 10 now

What’s up with all these Northern VA kids going to Michigan?

I have been following Beard. What a great swimmer.

Check out Dylan Cudahy, Machine Aquatics, for next year’s ranking.

Another person who deserves to be on this list in Ben Walker. Interestingly, his best three events are the exact same as SwimSwan’s #14, Charlie Swanson, however, Walker has faster times in all three of those events. Not to mention a horde of other fast times, he has extreme versatility and should be a favorite for the college coaches!

Mobile site got the best of me, stopped me from typing out my full reply!

I posted here 2-3 years ago to pay attention to Ben Walker. He swims for PEAK in Houston, but grew up in Nitro. A great kid and very versatile swimmer. Love his breaststroke, but he is very good in fly and back as well. I don’t know how much he has grown in last 2 years, but he was built for 200/400 IM and 200 breast last time I saw him.

That was PACK not PEAK.

Absolutely correct Psychodad, but only one correction: Ben swims for PACK, which is a club based in northwest Houston, while PEAK is in south Houston.

As Agon said, if you are a college swim coach and not talking to Ben already all the time from yesterday, you are not doing your job.

Agreed, Ben walker should be on here

Does Stanford have strict academic admin policies for athletes?