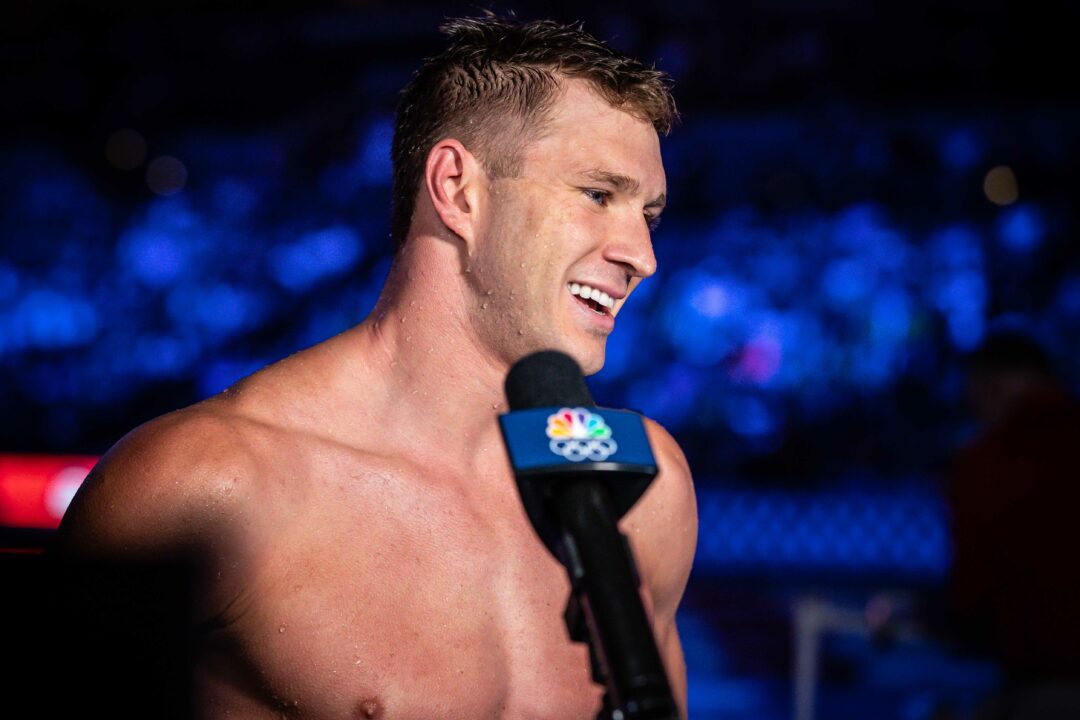 Ryan Murphy is not only the undisputed favorite in the men's 200 backstroke at the U.S. World Trials, but is probably the top pick for gold in Budapest. Archive photo via Jack Spitser/Spitser Photography

Two-time Olympian Ryan Murphy is the favorite in this event. He hasn’t set a best time in the 200 back since his 2018 Pan Pacs gold medal performance, but his 1:53.57 is still two seconds clear of his next competitor who will be at U.S. Trials.

The race for second, however, is heating up, especially with the second and third place finishers from Olympic Trials—Bryce Mefford and Austin Katz—not in Greensboro. Mefford’s future in the sport is up in the air now that he has completed his fifth season at Cal, and Katz has not swum in a meet since Omaha.

Fourth through eighth from Trials will be vying for a spot on the Worlds team, though, so let’s take a look at how they—and the rest of the field—stack up.

Shaine Casas has been on fire in his first pro season. His head-turning swims have been in other events, but he did swim a 1:58.09 at the Westmont Pro Series. He has the second-fastest lifetime best in the field at 1:55.79, which is from the 2019 Nationals. With the way he’s been swimming so far this season, he’s set himself up nicely to potentially drop a new personal best. Casas will be busy next week, but the 200 back will be his first event.

Another factor here is that neither Murphy nor Casas have to contend with a double taper and have been able to focus their season around Trials, which many of their competitors have not been able to do due to the college season. While this won’t necessarily be the deciding factor in the race, it’s certainly worth keeping in mind, especially because they are the only two returners from the final in Omaha that didn’t swim in the NCAA this year.

Even without Mefford, Cal backstroke will still be well represented.

NCAA champion Destin Lasco will look to follow up a strong sophomore season by translating that success to the big pool. He was off his lifetime best by about two seconds at NCAAs, swimming 1:37.71 to take the title. His long course best sits at 1:56.81 from Trials, where he finished fifth.

Fifth-year Daniel Carr was also off his best time in the 200-yard backstroke this year, clocking a 1:38.28 at NCAAs. Like the 100, his long course best time is from 2018, when he swam 1:57.69. He also finished eighth in the Olympic Trials final, and will look to improve on that finish here.

NC State’s Hunter Tapp is seeded second with his lifetime best 1:56.76 from Trials. In Omaha, he finished fourth, and will be looking to fill the gap left by Mefford and Katz. At the U.S. Open in December, he was 1:58.74.

The last finalist from Omaha we’ll see at these trials is UVA’s Jack Aikins. Aikins was 2:02.42 at the U.S. Open, but expect him to be faster next week. At NCAAs he set a personal best and school record in the 200-yard back in 1:39.22.

TAC Titans’ Lance Norris and Braeden Haughey are lurking in ninth and 12th on the psych sheet. Norris’ best is 1:59.98 and Haughey’s is 2:00.38. Neither has raced long course this season, so it will be interesting to see what they bring in their hometown pool.

Daniel Diehl also hasn’t raced the 200 back in long course this season. He’s entered with his yards time of 1:41.92. At Buffalo Sectionals, he popped a 53.59 to crack the 15-16 NAG record. Keep an eye on how his speed translates in the longer event, because he has the potential to play upset to the older swimmers in the field.

OTHER NAMES TO CIRCLE

After taking a leave of absence from Michigan, returning home and training with Carmel Swim Club, Wyatt Davis will suit up in Greensboro. He has been racing, and his season-best stands at 1:59.38, 1.2 seconds off his best time from the 2019 World Juniors. It might be a bit of a leap for him to qualify for his first senior Worlds team, but he’s certainly capable of making the final.

One swimmer lurking down on the psych sheets with a yards entry is Nicolas Albiero, who set a SCY lifetime best of 1:39.63 at the ACC Championships in February. His last LC 200 back came nearly three years ago in 2019, setting his best of 1:58.57. If he is around that he could be a championship finalist from one of the early heats.

25-year-old Sam Stewart has broken 2:00 four times and was 2:00.30 in Westmont, and Stanford commit Josh Zuchowski is another name to watch as he’s been in the 2:00s a few times in recent years.

Finally, Landon Driggers set a new best time of 2:01.03 at the Westmont Pro Series. He has some work to do to hit the FINA ‘A’ cut of 1:58.07, but in this relatively small field—28 swimmers before scratches—he could be a threat to final.

Dark Horse: Baylor Nelson (SwimMAC) — Another North Carolinian, Nelson swam a lifetime best 2:00.85 at the U.S Open. SwimSwam’s number one recruit in the class of 2022, the Texas A&M commit will look to break the two-minute barrier and grab a lane in the final.

baylor nelson is class of 2022

Hopefully Destin Lasco will exploit his full potential in long course at one point of his career.
Looks like it’s once again unlikely to happen this year with the bad timing of the schedule. 🙁

Amazing that Conger’s high school to college summer time of 1:55+ would be in the top 2.

Weak even for the US behind Murphy