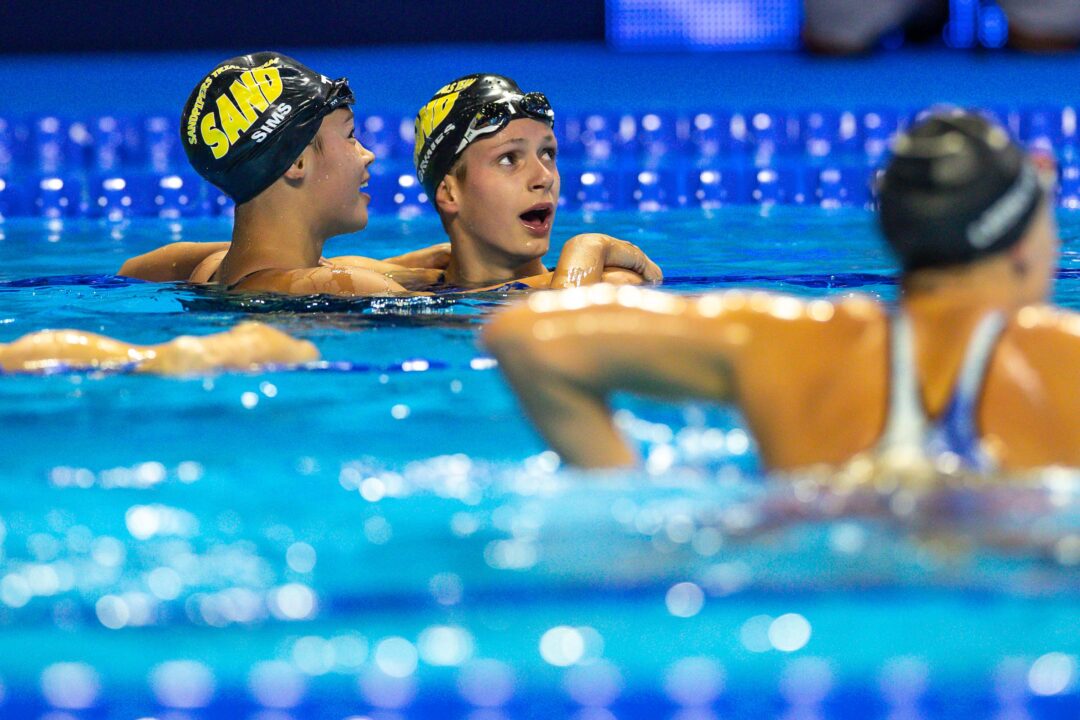 With Katie Ledecky the clear number one, Katie Grimes and Bella Sims will be among the names vying for the second spot in the women's 800 freestyle. Archive photo via Jack Spitser/Spitser Photography

Katie Ledecky is the favorite here at Trials and at World Championships. Her resume speaks for itself here—she’s the defending three-time Olympic and world champion, and recently reclaimed all of top-25 times ever in the event. She’s had a strong first season training under Anthony Nesty in Gainesville. We’ve seen her drop down and swim some sprints this season, but that’s no reason to think she won’t be ready for her bread-and-butter distance events. This season, her best is an 8:11.83.

Behind Ledecky, however, the race for second is a wide-open one, and full of young swimmers looking to make their first Worlds team.

After a breakout 2021 which saw them put three swimmers on the Olympic team, the Sandpipers will look to follow up last year’s successes in Greensboro, One of their Olympic qualifiers, Erica Sullivan, who just finished her first season at the University of Texas, will not be competing due to a shoulder injury.

The Sandpipers still have plenty of talent in the event though, starting with the second Olympian in the event, Katie Grimes. Last summer at fifteen years old, Grimes placed fourth in Tokyo, going a lifetime best 8:17.05 in the heats. Notably, that time would have medaled had she produced it in the final. At Open Water Nationals last month, Grimes won the 10K and the 7.5K Juniors’ race.

Bella Sims was the third Sandpiper Olympian last summer. She swam on the prelim 4×200 free relay in Tokyo, and though the shorter distance may play more to her strengths, she shouldn’t be counted out here. She’s sitting fourth on the psych sheet with her lifetime best 8:23.55 from Trials last summer. At the San Antonio Pro Series, she swam 8:30.83 before flying to Open Water Nationals, where she finished third in the 5K. Sims is entered in 7 events this week, but the 800 free falls on the first day.

15-year-old Claire Weinstein is right behind Sims on the psych sheet. She swam a lifetime best this year of 8:32.51. While she will most likely need to drop more time if she wants to make the team, another drop is not out of the question for her.

The final Sandpiper in the race is Paige Kuwata, who’s committed to Louisville. Kuwata really shines in the 1500, but she could potentially sneak into the 800 final. While she hasn’t swum the event this season, she’s gone multiple best times in short course, which could indicate that a drop is coming in the big pool as well.

OTHER NAMES TO CIRCLE

The biggest name that we have yet to mention is Rio Olympian Leah Smith. After a disappointing Trials in Omaha, Smith will be looking to bounce back this week. The veteran has been training at the University of Texas this season, and went 8:22.80 in San Antonio a few weeks ago.

After Smith, it’s teenagers all the way down the psych sheet until 21-year-old Tylor Mathieu. Mathieu swam 8:47.23 at the Toyota U.S Open in December, about four seconds off her best. Her Florida teammate Elise Bauer swam a lifetime best 8:43.03 at the same meet.

Caroline Pennington is entered as a member of her club team, the TAC Titans, but she just finished her first season at USC. She’s been focused on yards this season, but she went lifetime bests in both the 500 and the 1650, so she could be set for a drop here from her 8:40.50 from 2019 as well.

Hannah Bellard, who’s committed to Michigan, swam 8:48.69 at Indy Sectionals this spring. That’s well off her best, so look for her to be faster this week.

Michaela Mattes and Kayla Han have already swam lifetime bests this season, going 8:41.33 and 8:42.15 respectively. Keep an eye on both of them to see if they’ll drop again.

Sixteen-year-old Jillian Cox sits between them on the psych sheet at #10. In San Antonio, she clocked an 8:43.74, just over a second off her best. Now in theory fully tapered, she’s another swimmer who could be primed for a drop.

Dark Horse: Erin Gemmell (NCAP) — Gemmell is lurking about halfway down the psych sheet, but she could sneak into the final. Her best is 8:43.41, and she hasn’t swum the event this season. There’s a crowd of swimmers in the low 8:40 range, and whoever has the best swim out of them could be in the final. There’s no reason to think that it can’t be Gemmell.

slight nitpick but Grimes’ lifetime best of 8:17.05 was set in prelims and would’ve won her the bronze had she swam the same time in finals

still have Grimes getting in here for second

I have Bella Sims for 3rd

her technique is so unique. For those who don’t know swimming, taking an 800 out at 27.9 is absolutely crazy. She swims each race as if she’s sprinting it and doesn’t loose ground. Works for her (8:23.55)!

I have Sims 2nd, and Grimes 3rd. Leah goes out hard but her hands are full with two teens than have never ending endurance.