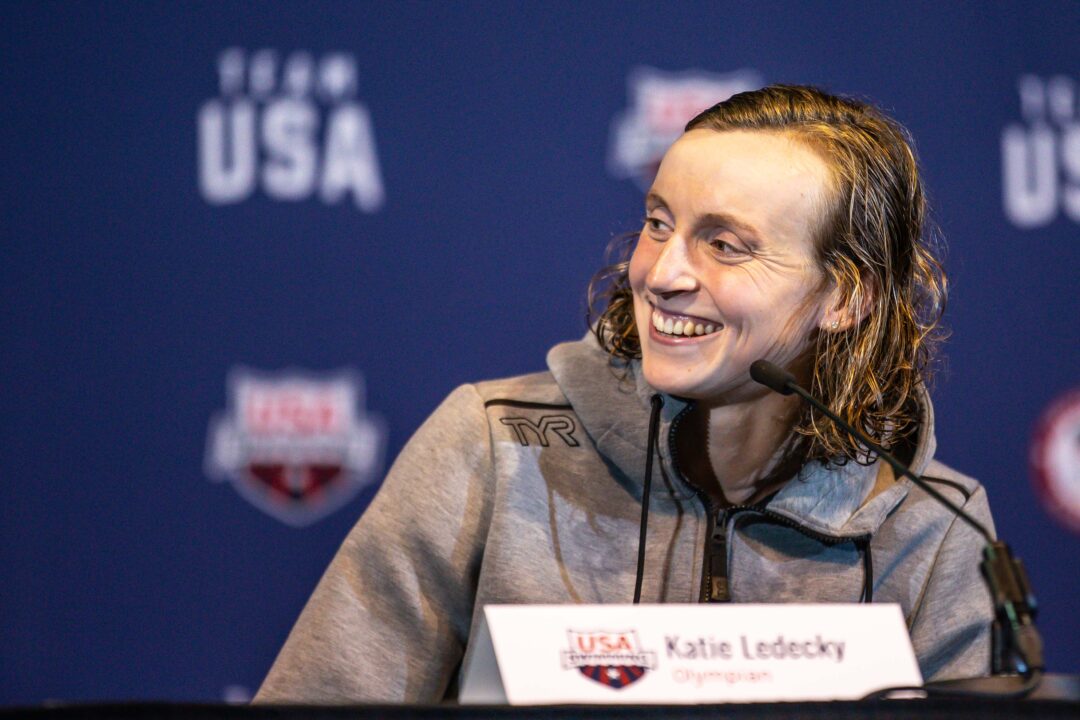 Katie Ledecky bumped Australian Ariarne Titmus out of the top 25 performances of all-time on Thursday, and now claims the 25 fastest 800 frees in history. Archive photo via Jack Spitser/Spitser Photography

American swimmer Katie Ledecky’s 8:11.83 was notable for a number of reasons. For one, it was faster than her gold medal time at the Tokyo Olympics, showing that her Florida training is, in a two-dimensional matrix at least, working.

For two, she negative-split the race, showing some signs of that back-half speed that fellow Olympic champion and Florida distance trainee Bobby Finke showed at the Olympics.

But more esoterically, it re-establishes Ledecky as owning the 25 fastest times in the history of this event. She bumped Australian Ariarne Titmus, who swam 8:13.83 en route to an Olympic silver medal in the event, is the second-fastest ever, and that time is now the 26th-fastest ever.

Ledecky has the only active top-25-times in any long course event. There are other dominant swimmers who hold a lot of the top times in an event – Katinka Hosszu has 22 out of the 25 best 200 IMs, and Adam Peaty has 21 out of the 25 best 100 breaststrokes, for example.

But Ledecky’s ability to not only dominate, but to swim among the all-time fastest results in local club meets that are designed primarily for good high school swimmers, is unparalleled in the modern generation, especially in the 800 and 1500 freestyles.

Below, we’ve dug out the swimmer with the most and second-most times that rank in the top 25 performances ever in each event.

While we had the data open, for fun we looked to see who had the most all-time top 25 swims across all races. At least 8 swimmers have a minimum of 20 total entries. Scroll to the end to see who leads that list.

Data was all compiled by hand, because Daniel is busy. Let me know if I missed anything.

Most Top 25-Ranked Swims By Event

The FINA rankings and the nuoto list both show McKeon as having 6 top 25 swims in the 100 free.

Keep your eye on Kaylee! I think she snuck up on a few people and she already made this list!

must be the real deal in Florida, these are ridiculously good splits

Ooh, so how easy would it be to pull historical numbers here too? How many swimmers in the past matched this achievement in their time? I.e. – they could claim all 25 top times in their event(s), in their era. Meagher in the 200 fly? Thorpe? Egerszegi? Fraser? Darnyi? Matthes? Spitz? Weismuller? Ghould? Evans? de Bruijn?

Note that dominating sprint events is way harder than distance events, where the field is always weak worldwide.

Mary T at one time held 14 out of 15 top times in 200 fly – the one she didn’t have was by an East German. If historical records were easier to retrieve, it’d be interesting to see how many she had in top 25.

1
0
Reply
Grimes/Mcintosh combo is the future

Katie Grimes will own distance events in 2 years time. Cheers!!!

Ally McHugh may take Grimes’s spot in the 800.

they’ll be the faces of distance swimming for sure but I can’t see either breaking 8:04.79 or honestly even close to that

wtf, she will lose to the Queen in Budapest and Paris!

What’s your prediction for her in the 800?

I bet Titmus chickens out of Worlds altogether

aaah but who still has world records and the top 64 times in events?

Cry about it. Titmus will smash your Genevieve on any given day.

i can smell the copium in your breath