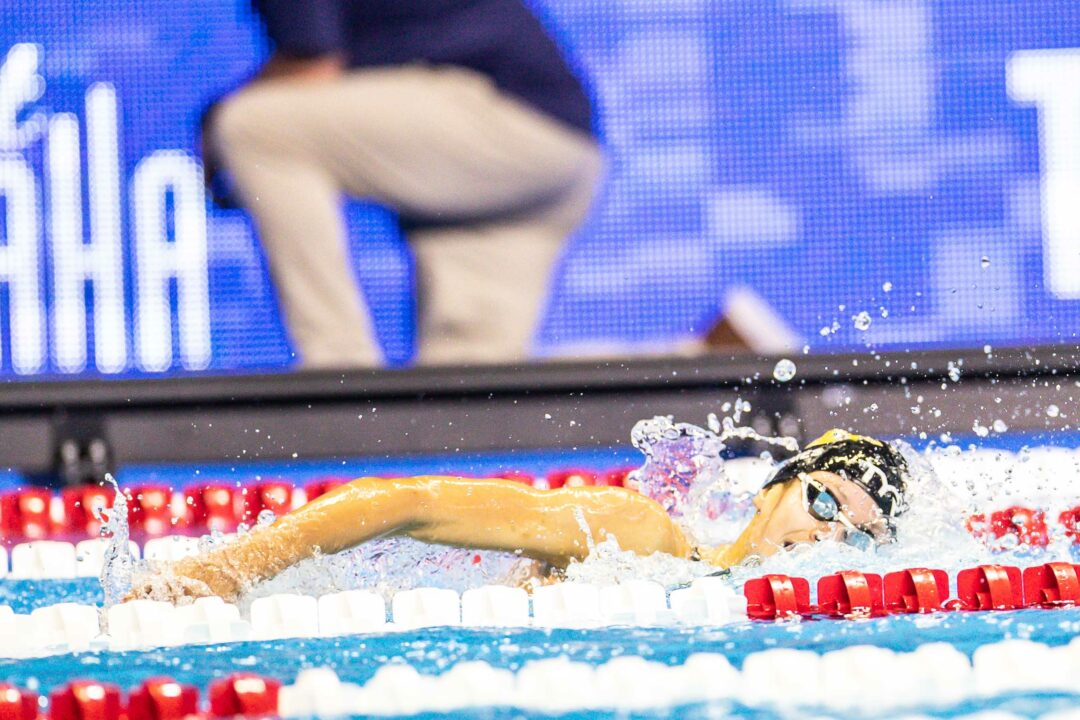 16 year-old Katie Grimes made a senior international team for the second straight summer, this time punching her ticket with a win in the 400 IM. Current photo via Jack Spitser/Spitser Photography

While there were four events each for men and women tonight, only one new name was definitely added to the U.S. World Championships Roster.

On the women’s side, 16 year-old Olympian Katie Grimes secured a spot on the U.S. pool roster with a win in the 400 IM. Grimes won the 10k at the U.S. Open Water National just a few weeks ago. Emma Weyant, who won Olympic silver in this event in Tokyo, picked up a likely spot with a 2nd-place effort behind Grimes.

In the 100 fly, phenoms Claire Curzan and Torri Huske finished 1-2 for the third time this meet, having already accomplished that feat in the 100 free and the 50 fly. Lilly King picked up a second swim in Budapest by winning the 50 breast after winning the 200 last night.

Katharine Berkoff blasted an American Record in the 50 back, and while she’s not officially on the roster yet, she will in all probability make the team as well.

On the men’s side, no new names were definitely added to the roster, but Carson Foster secured an individual swim with his victory in the 400 IM. He was already on the team thanks to a third-place finish in the 200 free last night, but this gets an individual berth. Olympic gold medalist Chase Kalisz finished 2nd behind Foster, but he’ll have to wait to officially be added to the team for now.

100 fly winner Caeleb Dressel was already on the team after winning the 100 free. Michael Andrew and Hunter Armstrong broke an American Record and a World Record, respectively, however, neither swimmer is officially on the team yet. Andrew won the 50 breast and Armstrong the 50 back, and stroke 50s fall under Priority #3 when it comes to adding swimmers to the U.S. Team.

A couple ties make the math weird, but right now, the women have 11 guaranteed roster spots, and the men have 12. Each gender also has four swimmers “waiting” to get added to the team under “Priority #2,” the second-place finishers in the Olympic Events. With six events left representing a possible twelve roster spots, the men need two more doubles, and the women need one more doubles, among the top two priorities, to ensure all of the top two swimmers can make it.

Each gender also has another four swimmers waiting to make the team in either a stroke 5o or as part of the 400 or 800 freestyle relays. So, the women currently have a theoretical seven additional swimmers they could take before hitting the 26 swimmer roster cap, while the men have room for six more. Given the names that are swimming the remaining six events, there is a very high degree of likelihood that the U.S. will be able to take all qualifying swimmers to Budapest.

Note: There are several additional doubles once you start factoring in stroke 50s, but since those “slots” don’t help add Priority #2 to the roster, we’re not including them for now. The upshot is that once Priority #2 is officially added, we should see a cascading effect that will add rapidly to the number of doubles.

Theoretically the team could take up to the 6th-highest eligible finisher. Realistically the selection won’t go that deep, unless a lot of swimmers decline their spot, and for now, we will just show you the swimmers that are guaranteed to make the team.

* Sims will potentially make the senior World Championship team as a member of the 800 free relay. Per the selection criteria , if she swims at Worlds, she will not be eligible for this meet.

NGL It feels like the Junior team selection is slightly confusing for anyone not placing first.
Even your post from yesterday is completely different from today.
Does the 2nd place girl in the 200 BR not have a chance anymore?

It is a bit weird. 2nd place still definitely have a chance. We should have some more clarify tonight, and we’ll rank which 2nd place finishers should be at the top of the list for making the team.

Is Jacoby in the 100 breast junior team a mistake? It hasn’t happened yet. And also it seems likely she will make the senior team.

Just a typo. Should be 200 breast. And if she does make the senior team in the 100 breast, we’ll adjust our projected junior roster accordingly.

It’s so American that at home we swim most of our meets in a bathtub and then on the world stage act like the 50s are beneath us.

Historically, doesn’t the US also take 2nd place in the 50’s though? (if there are spots available)

No. The second swimmer in the 50s is offered first to the winner of the 100 of that stroke, then the second place swimmer in the 100, then anyone else on the team who wants it.

I don’t believe so. The current selection criteria specific that whoever wins the stroke 100 event gets the second slot in the corresponding stroke 50. It’s not entirely clear who gets the second spot in the same person wins the 50 and the 100 at Trials.

I think this would apply:

If neither Priority #3 and/ or Opportunity #2 in 1.3.9 are filled, the unfilled position(s) shall, after consultation between the swimmer, the Managing Director, National Team and the Head Coaches, be filled by the existing Team member(s) who has swum the fastest time (and the second-fastest time if two positions in the individual non-Olympic event are to be filled) in such Event from March 1, 2020 through and including… Read more »

OK so Huske by winning the 100 fly should swim the 50 along with Curzan. This is a good thing because it’s fun to watch those 2 battle, so we get all 3 event rematches because I’m making big assumptions they will final in all 3 of them again. You didn’t list that event for her because it doesn’t matter for qualifying since she finished 2nd in the 50 and only firsts matter by getting you to priority 3. Makes sense. She’ll swim it but since the 2nd slot in the 50’s is really “someone who already the made the team by some other means” with rules around that it doesn’t impact roster selection knowing that both 50 fly slots… Read more »

It’s actually crazy that Justin hasn’t earned an official roster spot after going 48.3 and 23.9 in a 50 back. Then it’s even crazier that Armstrong went 48.2 and 23.7WR and is still only priority 3.

While it seems like he will end up swimming that, I was focusing on swims that are part of the selection criteria, and second-place in the stroke 50s doesn’t factor in.

Are we sure Armstrong isn’t already on the team? I imagine USA Swimming won’t bother issuing an official statement because it likely won’t matter after tomorrow where we’ll almost assuredly pick up 2 more doubles from the 400 free and 100 breast, but I’m intrigued if it isn’t the same rule as the Swanson/Fink rule.

We’ve been getting press releases from USA Swimming each day. Tuesday’s said “Due to the fourth-place tie, the final relay-spot finishers will be confirmed later in the competition.” They haven’t added him to the official roster tracker.

They need the second 100 for medley relay prelims.