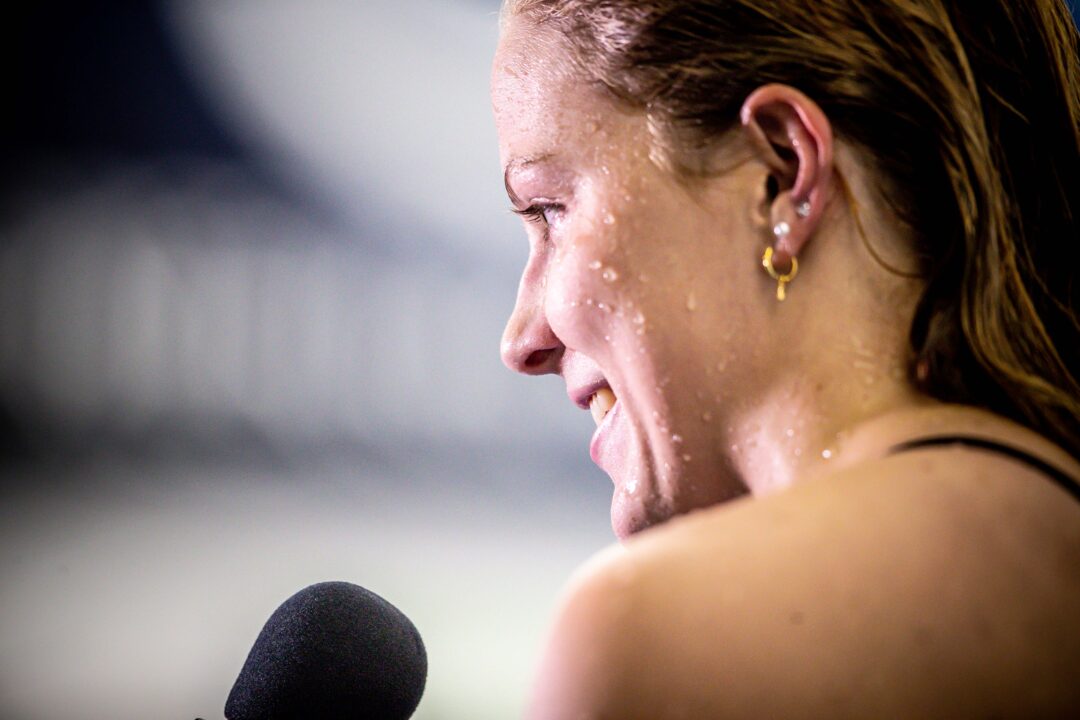 Katharine Berkoff led an incredibly stacked field in the women's 50 back, capturing the American and US Open Records en route to a 27.12 win. Current photo via Jack Spitser/Spitser Photography

Barely a month after setting the American and US Open Records in the 100 yard backstroke at NCAAs as part of the NC State Wolfpack, 21 year-old Katharine Berkoff repeated the feat in the 50m back tonight.

Swimming in lane five in a stacked  A-final, Berkoff blasted a 27.12, getting her hand on the wall first as three three different women beat or equaled the existing records.

Berkoff’s touched ahead of Regan Smith (27.25) and Olivia Smoliga (27.33), two women have dominated US backstroke for a while now.

Interestingly enough, Berkoff’s swim tonight broke records belonging to each of those two women. Smoliga previously held the American Record (fastest time ever by a U.S. swimmer) with a time of 27.33 that she swam at the 2019 World Championships. Smith previously held the U.S. Open record (fastest time on U.S. soil), which she set just this morning.

Before this morning, Smoliga had held that record too, with a 27.43 from a 2018 Pro Swim Series stop.

Berkoff now also appears to the 5th-fastest swimmer ever in the event:

With her swim tonight, Berkoff should secure a spot on the Worlds team. 50 stroke swimmers are added to the roster after the top two finishers in each individual Olympic event (and the 3rd and 4th place finishers in the 100/200 freestyles), subject to a roster cap of 26 swimmers per gender.

While Berkoff’s father, David Berkoff, swam at two Olympic Games, set world records, and won two Olympic gold medals, Katharine is in line to do something he never did – swim at the World Championships. While those are typically held every two years now, they transitioned from a once every four years event during the senior Berkoff’s peak, with no World Champs occurring between 1986 and 1991.

Seems like it’s going to be Smith/Berkoff/White ultimately competing for the 2 spots. Maybe Curzan gets in there too. Smoliga has a big hill to climb to try and make it.

Happy for her! Probably so nice going into the 100 with no pressure.

chip off the ole block

Looking at the doubles so far seems like she’s a lock.