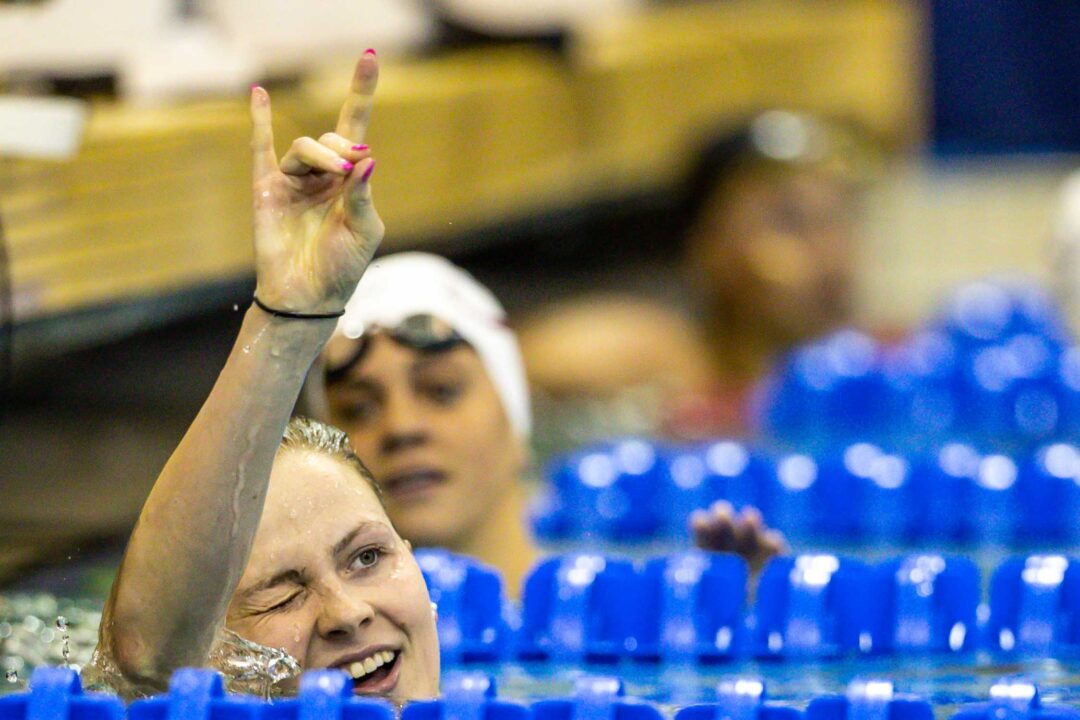 Katharine Berkoff has dropped the women's 100 free 'B' final on Tuesday after qualifying 10th out of the prelims in 55.10. Archive photo via Jack Spitser/Spitser Photography

A trio of swimmers have opted out of the consolation final of the 100 freestyle to mark the only top-16 scratches for the opening night of competition from the 2022 U.S. World Championship Trials in Greensboro, N.C.

In the women’s 100 freestyle, Katharine Berkoff has dropped out of tonight’s ‘B’ final after qualifying 10th overall in a time of 55.10 this morning, while Paige Madden has withdrawn after finishing tied for 11th in 55.21.

Berkoff was third in the 100 free at the Women’s NCAA Championships, but her focus this week will be geared more towards the 50 and 100 backstroke. Madden is among the favorites to qualfiy for the World Championship team in the 200 free and 400 free.

Those two moves allow Gabby DeLoof and Morgan Scott to avoid a swim-off for the last spot in the consols, having tied for 16th in 55.40, and it also moves Linnea Mack, the 18th-fastest swimmer in the prelims (55.52), into the ‘B’ final as well.

In the men’s 100 free, Destin Lasco has scratched the consolation final after finishing 12th this morning in a monstrous best time of 48.88. The Cal Golden Bear will prep for the 200 backstroke on Wednesday, having won the NCAA title in the event last month.

With Lasco dropping the final, Macguire McDuff will now swim the ‘B’ final and Kaii Winkler will remain in the ‘C’ after the two men tied for 17th in 49.68.

Additionally, Katie Crom has given her spot in the ‘C’ final to Micayla Cronk after the two swimmers tied for the eighth and final spot in that heat this morning in 56.69. Only swimmers aged 18 & under are eligible to race in the ‘C’ final (unless there are empty lanes, in which case the next-fastest 19+ swimmer may compete).

As reported last night, top-eight seeds James Plage and Trey Freeman have both dropped the men’s 1500 freestyle, while Erin Gemmell was the highest-seeded swimmer to opt-out of the women’s 800 free at 14th.

What’s the point of swimming in the B or C finals anyways? Just for a good time?

Yep. Chance to get a second swim at your taper meet. For some swimmers, could impact Junior Pan Pacs or Mel Zajac or National Team qualifying. Chance to race on TV.

Most of the athletes at this meet know that they don’t have a realistic chance of making the team for Worlds. In most races, there are maybe 3-4 swimmers that have a real chance. So most swimmers aren’t going to approach it like the pros – who scratch anything they don’t think they’ll get top two in. Most swimmers race out their events to see how high they can place.

I mean, in a lot of races, the 8th place qualifier goes into an A final knowing they have… Read more »

So, only the people guaranteed to win should swim? What is your reasoning here?

wondering what the incentive of swimming a b or c final is when arguably they are out of the competition. It’s a trials meet to qualify for worlds. They competed in am in the heats for a chance and lost so why does it matter so much to make the b final. What’s the incentive? Let’s say you win the b final. What do you actually win? Just asking for a friend 😉

This meet isn’t held just for the sake of Trials. It’s the national championship, the big taper meet of the year for most swimmers and especially for those who don’t go to World’s.

B finals still seem pointless. No one is ever that surprised nor cares when swimmers opt to scratch a b final.

Curious, why would Winkler (and Coach) decide against a swim off, with a chance to move to the B final, essentially guaranteeing a spot on the Jr team?

Wiinkler has the fastest result of any junior by .5 on 1 guy and a second or more on the rest of the field. Tiring himself out more wouldnt help

I get the math, but you’re still rolling the dice by racing in the C final. I understand fatigue could be an issue. Is that rational behind the decision? We will probably never know.

C Final he will be racing against all junior swimmers

That was my point, see post below. Happy to be wrong.

Jr Pan Pacs selection criteria says best time in Finals and defines Finals as A, B, and C final. I believe that means this is the rare case where the fastest time in the evening wins regardless of heat

Jnat selection criteria (quoted below) says “results” not “best time” from A, then B, then C. So any time in the A/B final (if only one JrNat in A and B) gets you on the team as first selected. If he won the swim-off, he would have been guaranteed the first selection for the Jr team no mater his time tonight (I hate spelling the work guaranteed, and I just did it again). I am happy to be wrong here, but IMO he is now rolling the dice by being in with all the other JrNat team hopefuls.

Ik Crom went off her LTB in the 200 Fly, but her closing speed in the last 50 is amazing.