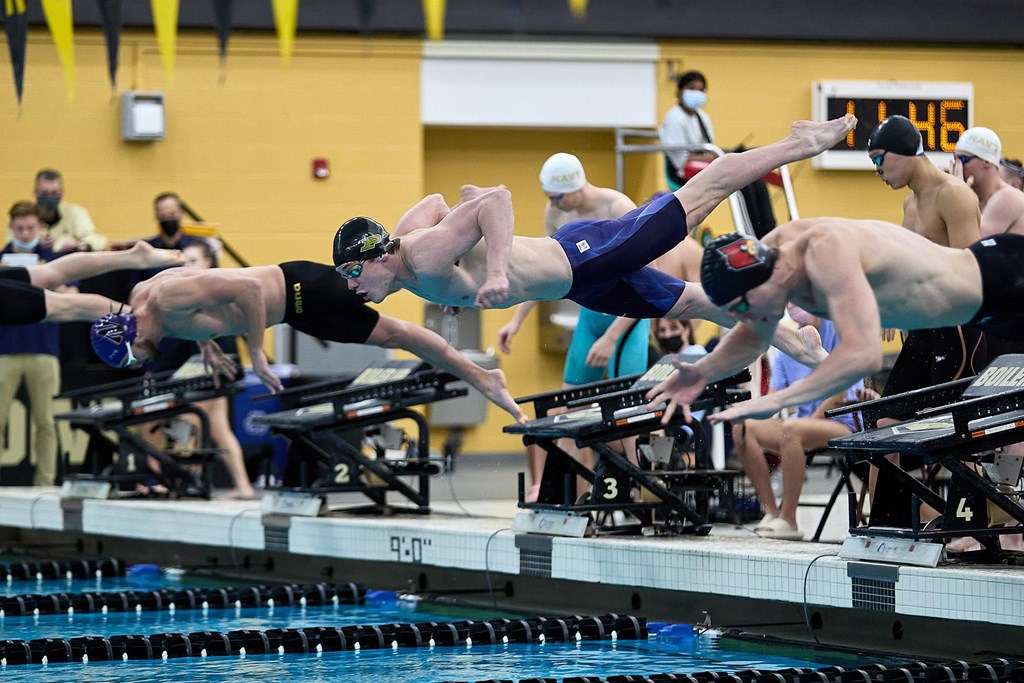 The final day of the 2022 Purdue Invite is here and the last prelims session of the meet is in the books. Stock photo via Big Ten Conference

The final day of the 2022 Purdue Invite is here and the last prelims session of the meet is in the books. This morning, prelims of the 200 back, 100 free, 200 breast, and 200 fly took place. Timed finals over the 1650 will happen later today and the 400 free relay will be in tonight’s finals session as well.

Louisville heads into the finals session tonight with a huge lead in the women’s standings and a slim lead in the men’s meet.

Purdue’s Brady Samuels, who has had an exceptional meet so far, clocked a 42.69 to lead prelims of the men’s 100 free by a wide margin this morning. Samuels was out in 20.19 on the first 50, establishing a lead that he would grow through the back half of the race as well.

Gabi Albiero posted a 48.21 to lead the women’s 100 free this morning, touching exactly a second ahead of teammate Christiana Regenauer, who was second. Louisville’s Ella Welch finished third in 49.34 and fellow Cardinal Julia Dennis was fifth in 49.50, marking four Louisville swimmers who were under 50 seconds this morning. Notably, 50 free champion Jasmine Nocentini (Northwestern) was fourth this morning with a 49.37. The race should be one of the most exciting tonight in finals.

The Boilermaker men had a strong showing in the men’s 200 breast, which Nick Sherman led this morning in 1:54.32. He led the field by nearly three seconds, with teammate Coleman Modglin finishing second in 1:57.03. The Boilermakers also saw Luke Fortner (1:59.05) and Andrew Witty (1:59.26) qualify for the ‘A’ final.

Louisville’s Abby Hay was dominant in the women’s 200 breast this morning, swimming a 2:09.73. She was the fastest in the field this morning by nearly three seconds, with FIU’s Christie Chue touching second in 2:12.43.

Northwestern’s Miriam Guevara swam a 1:57.95 to post the top time in the women’s 200 fly this morning. Louisville’s Tristen Ulett was second, swimming a 1:58.70.

Wonder if we’ll get any commentary on the big time D2 programs competing this weekend. Seems like Drury and UIndy are having some nice swims. Some even better than their D1 counterparts at their respective meets.