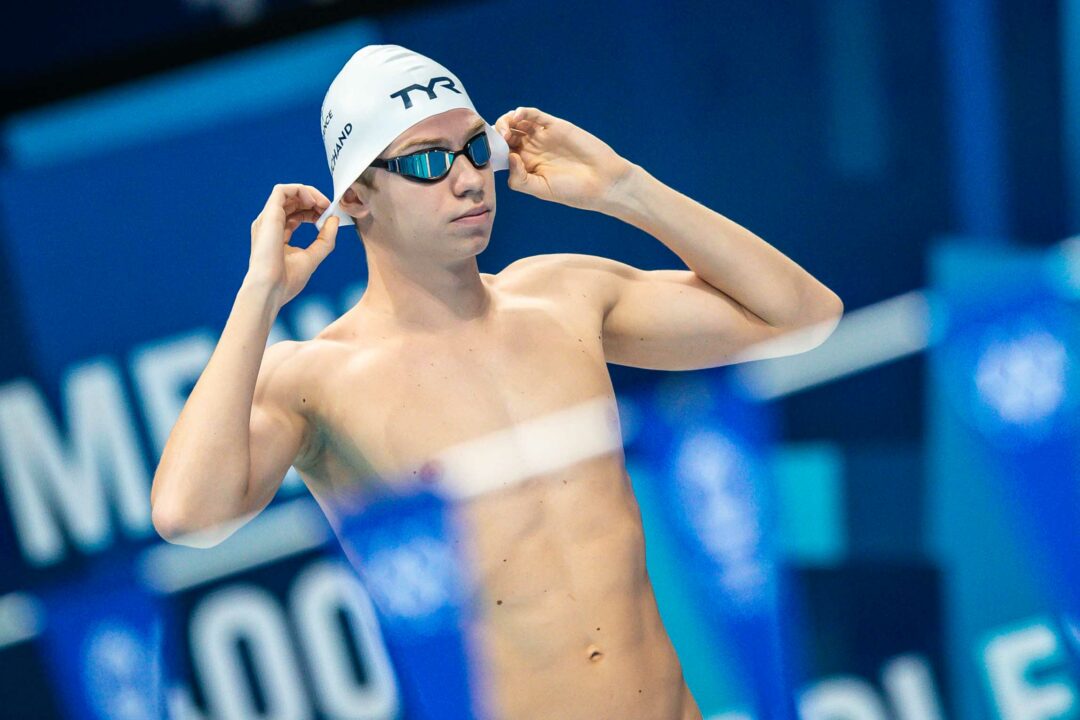 For the first time since the mark was set 5 years ago, Chase Kalisz's NCAA and U.S. Open Record could be in serious danger from freshman Leon Marchand. Current photo via Jack Spitser/Spitser Photography

The men’s 400 IM is one of the most stacked events at the 2022 Men’s NCAA Division I Swimming & Diving Championships. 5 of the top 15 performers all-time, including the 2nd-, 3rd-, and 5th-fastest men ever in the race will be facing off in Atlanta this weekend. For the first time since the mark was set 5 years ago, Chase Kalisz‘s NCAA and U.S. Open records could be in serious danger.

Arizona State’s Leon Marchand is having an explosive freshman season in the NCAA. Two of Marchand’s most impressive accomplishments include becoming the first freshman to ever break 1:40 in the 200 IM, and becoming the 2nd-fastest performer all-time in the 400 yard IM. Marchand has given every indication that he is the guy to beat in the 400 IM this year, and he might even give Kalisz’s NCAA and U.S. Open Records a scare, though he has a very deep field to fight through.

Florida’s Bobby Finke is the defending NCAA Champion in the 400 IM, thanks to his signature final 50 speed. At the 2021 NCAA Championships, Finke blasted a 23.83 on the final 50 of the race to pass leader Carson Foster and touch the wall fully 1.35 seconds ahead of Foster, despite trailing Foster by 1.34 seconds at the 300-yard turn. Finke did not compete at the 2022 SEC Championships and is entering the meet with a bonus time of 3:47.68. Finke’s was unable to train with the UF team in the lead-up to the 2022 SEC Championships and missed the meet due to Covid-related health protocols, so it is would be bullish to predict that he matches his 2021 times.

Texas sophomore Carson Foster has been on the bubble of dominating in this event for several years now, and perhaps 2022 is the year he takes the final few steps to the top of the podium. Until Marchand came to the NCAA, Foster was the 2nd-fastest performer all-time in the 400 IM, though he was chased down by Finke on the freestyle leg of the race in the 2021 NCAA final. Foster also nearly made the Olympic team in the 400 IM last summer, though he was again bested on the freestyle (by Georgia Bulldog pro Jay Litherland), falling to 3rd. Even so, Foster ended 2021 with the fastest time in the world in the 400 long course meter IM. On top of that, Foster posted a 3:40.48 in the 400 yard IM in November (2021) in a dual meet with Virginia, a swim we determined to be the fastest 400 yard IM ever in a dual meet.

Carson Foster‘s older brother, Jake Foster, is a junior at the University of Texas and the 5th-place finisher in the 400 IM from the 2021 NCAA Championships. J. Foster’s 2021-2022 season best sits at 3:40.42, making him the 6th seed going into the meet. J. Foster will need to be at his best to make this year’s championship final, though he’s been under 3:41 on 8 separate occasions–just one more and he should secure himself a lane in the ‘A’ final.

The California Golden Bears bring in a trifecta of talent in the 400 IM. Hugo Gonzalez and Jason Louser currently hold the 3rd and 4th seeds going into the meet, while veteran Sean Grieshop placed 2nd in this race in 2021 and 3rd in 2019. Grieshop, like Finke, is coming in with a relatively low seed (17th), though with a lifetime best of 3:37.03 he is a solid bet to make another appearance in the championship final. Gonzalez, meanwhile, had a rough go in this race in 2021, finishing 9th overall but winning the consolation final 3:36.73–faster than Bobby Finke‘s winning time (3:36.90) in the championship final.

Stanford freshman Ron Polonsky turned heads with his IM performances at the 2022 Pac-12 Championships. Polonsky became the 3rd-fastest freshman ever in the 200 IM with a 1:40.71, and also posted a very competitive 3:39.49 in the 400 IM, giving him the 5th seed going into NCAAs this week. If he can swim that time again in prelims he is probably going to make the championship final in the race, though with an even deeper field than usual in this race, no one can afford to ‘take it easy’ in prelims, and everyone will need to be on their A game.

Texas senior Braden Vines and sophomore David Johnston placed 6th and 8th in the 400 IM at the 2022 NCAA Championships, respectively. In fact, Texas placed 4 swimmers in the championship final. With so much IM talent in the Pac 12 this season, it’s difficult to imagine the Longhorns doing this again in 2022, though Texas did once place 6 swimmers in a championship final at NCAAs. In order for this to happen, however, Vines and Johnston will need to move way up in the rankings as they enter the meet as the 22nd and 29th seeds, respectively.

Arizona State freshman David Schlicht is another Pac 12 athlete that could slip into the ‘A’ final of the 400 IM at NCAAs. Schlicht has a best time of 3:39.59 and a season best of 3:40.60 from the GAC Invitational in November, though was a 3:43.53 at the Pac 12 Championships. If Schlicht hits his taper, he should make the championships final, though if he’s not within a second or better of his best time he could find himself in the consolation final.

Dark Horse: Ian Grum, Georgia. Grum has a lifetime best of 3:40.51 but has only been 3:43.23 this season. Grum placed 7th at the 2021 NCAA Championships in the 400 IM, but enters the meet this year with a seed time nearly 3 seconds slower than last year. With what might be the fastest 400 IM field in history, Grum will have to be on his best in order to make the championship final again.

I’m excited for every race this week, but this might be the one I’m most excited about.

Unless Marchand swims like the ASU women did last week I think he takes this one with Carson and Hugo close behind him. Finke is insane but I don’t know if he has the first 300 to hang with those 3 when they’re on. Then again he could close in a 45 and make me look dumb.

I feel like there’s some disagreement between the prediction for Finke here and in the 1650. In the 1650 the author said “there is no doubt that he can get under his 2020 record this time around”, while here “it would be bullish to predict that he matches his 2021 times”. I don’t know who’s right (it’s different authors) but it’ll be interesting to see!

Marchand is too good. He is winning the 2 IM, 4 IM and the 2 Breast

Bob knows how to train 400 IMers

Leon Marchand is like, “weeeee! I come to America to win events! weeee!”

I have a good one weeee! “I come to America to train under Bob bowman and become next protégé! weeee!

I think that race is going to be close the entire time.